Singapore morning news for May 22 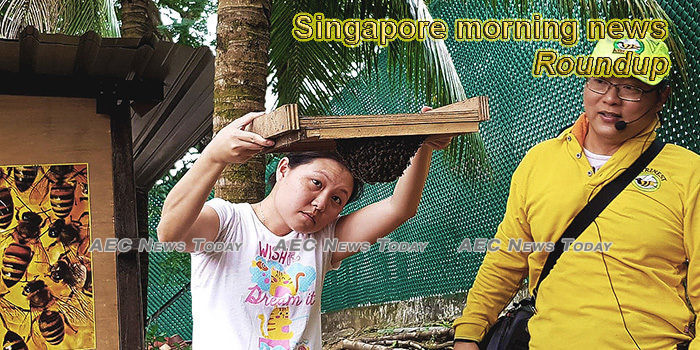 Going back to school not optional; safety measures will be in place
Attending school will not be optional, and students will have to return to school according to their assigned schedules from June 2.
— Straits Times (annoying popups)

CB rollback begins soon, but Singapore economy faces long road to recovery
SINGAPORE is still on track for its worst recession on record, private economists said on Wednesday, after plans were unveiled to exit a two-month quasi-lockdown on June 2.
— The Business Times

Safety measures as crucial as attractive fares, perks for air travel to rebound
WITH the road to recovery set to be a long one for air travel, airlines may have to dangle attractive fares to entice passengers back to the skies once they start adding capacity back into the market.
— The Business Times

No televised prayer calls on Hari Raya as religious content not allowed on free-to-air TV, MCI announces additional programming
The communal prayer calls for Hari Raya Aidilfitri and the special sermon on Sunday will not be broadcast on television because no religious content can be shown on free-to-air channels, the authorities said on Thursday (May 21).
— Straits Times (annoying popups)

NUS researchers discover creatures, some possibly new, in depths of Pacific Ocean
On Feb 14, a team of nine researchers from the National University of Singapore (NUS) embarked on an expedition to explore an understudied area in the world’s largest ocean.
— Channel NewsAsia (very annoying popups)

Police deploy autonomous robots in dormitory to patrol, ensure safe distancing
Autonomous police robots have been deployed at a foreign worker dormitory in the eastern part of Singapore to patrol the premises and ensure residents there abide by safe distancing rules.
— Straits Times (annoying popups)

Domestic helpers should stay at home during Phase 1 of Singapore’s reopening: MOM
Foreign domestic workers are urged to stay at home, even on their days off, in the first phase of Singapore’s reopening, as circuit breaker measures to stem the spread of COVID-19 are progressively lifted from Jun 2, the Ministry of Manpower (MOM) said on Thursday (May 21).
— Channel NewsAsia (very annoying popups)

More young offenders being put on probation on rise in arrests, court orders
More young people who run foul of the law are being placed on probation, a rise due partly to the increase in number of such arrests.
— Straits Times (annoying popups)

‘Like a mediator’: From spot checks to investigating breaches, here’s how ICA officers enforce stay-home notices
While on house visits, Immigration and Checkpoints Authority (ICA) investigation officer Ganesh Reddi Gurusamy has been berated, asked to retrieve letters from the mailbox and stepped in to solve technical difficulties.
— Channel NewsAsia (very annoying popups)

Businesses call for fair tenancy law to solve ‘growing’ imbalance in landlord-tenant relationship amid COVID-19 outbreak
Five business groups in Singapore have banded together to call for landlord-tenant legislation to be adopted to address a “growing imbalance” of power that has brewed years of unfair leasing practices.
— Channel NewsAsia (very annoying popups)

No graduation parade for SAF specialist cadets, but loved ones affix new ranks for cadets at home
Graduation parades have long been a prized feature of the Singapore Armed Forces (SAF) but Third Sergeant (3SG) Maisarah Abdul Raof and her squad-mates had a low-key version instead due to the pandemic.
— Straits Times (annoying popups)

Members who resigned, were expelled ‘no big deal’ for Progress Singapore Party: Tan Cheng Bock
Progress Singapore Party (PSP) secretary-general Tan Cheng Bock on Thursday (May 21) addressed recent reports of members who had resigned or were expelled, saying that their departures were no big deal to the one-year-old opposition party.
— Channel NewsAsia (very annoying popups)

Man apologises for false corruption claims against Josephine Teo, husband over Covid-19 care facilities
One of two men who made false corruption allegations against Manpower Minister Josephine Teo and her husband has apologised and taken down the offending post after legal letters were issued to them.
— Straits Times (annoying popups)

Grass cutting prioritised for some areas for public health and safety, says NParks
NParks will look into scaling up landscape-related operations in a phased manner, in line with the gradual easing of circuit breaker measures.
— Straits Times (annoying popups)

Coronavirus: Pawnbrokers baffled by uptick in gold redemption during circuit breaker
More people going to pawnshops during the circuit breaker period are redeeming their gold jewellery than pawning their items for cash.
— Straits Times (annoying popups)

Is asking for a waiver of childcare fees reasonable in this circuit breaker?
When news of childcare centre closures first broke, many parents were supportive of the move as they were worried of their child getting infected by Covid-19, or passing the virus on to more vulnerable family members.
— The Pride

Marriage certificates sent by courier and no tea ceremonies: First group of couples get married virtually during circuit breaker
Ms Lim Ding Yi had a professional make-up artist and a beautiful bridal gown arranged for her wedding, which was to be held at a hotel in May with about 300 guests.
— Channel NewsAsia (very annoying popups)

Wanted: Photos and videos on Covid-19 pandemic for National Museum and NLB records
People and organisations can from Friday (May 22) send in videos, photographs and journal entries that capture their lives during the Covid-19 pandemic, as part of the country’s efforts to archive the everyday impact of the coronavirus on society.
— Straits Times (annoying popups)

The Singaporeans helping to save the F&B industry, one online order at a time
How Jonathan Lim and Alan Goh’s Oddle platform has given many F&B businesses a new lease of hope in this pandemic.
— Channel NewsAsia (very annoying popups)

Boy injured by concrete that fell from ceiling of 45-year-old flat, HDB to carry out repairs
HDB said that it has helped the family to clear the debris from the spalling concrete, and will be carrying out repair works in the flat on Friday.
— Straits Times (annoying popups)