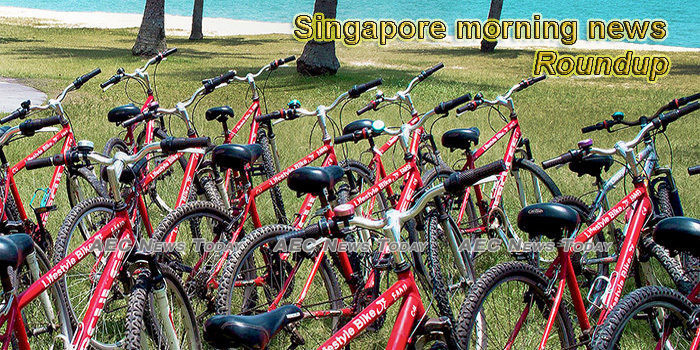 No workplace gatherings, socialising among employees when office operations resume after COVID-19 circuit breaker: MOM
Employees should not socialise during or outside working hours, even when office operations resume during Phase 1 of Singapore’s reopening following the end of the COVID-19 circuit breaker period.
— Channel NewsAsia (very annoying popups)

New measures for foreign workers resuming work
Staggered pick-up and drop-off times along with enhanced contact tracing measures were among a list of requirements that employers and dormitory operators have to fulfill before their foreign workers can return to work after June 1, it was announced yesterday.
— Straits Times (annoying popups)

No ERP charges until at least June 28: LTA
ELECTRONIC Road Pricing (ERP) will continue to be suspended until June 28, even as Singapore embarks on the first phase of reopening its economy, the Land Transport Authority (LTA) said.
— The Business Times

Singapore in talks with Australia, South Korea on ‘green lanes’ for travel
Talks are under way with South Korea and Australia to establish green lanes for travel in the Covid-19 environment, said Trade and Industry Minister Chan Chun Sing.
— Straits Times (annoying popups)

Implementation of new framework for taxi, ride-hailing companies pushed back to October
The implementation of a new regulatory framework for the taxi and private-hire car sectors will be delayed again to October, as operators have asked for more time to prepare their applications, the Land Transport Authority (LTA) said on Friday (May 29).
— Channel NewsAsia (very annoying popups)

MSF-funded services to gradually resume from June 2; over 50,000 applications for Covid-19 Support Grant received
A range of social services funded by the Ministry of Social and Family Development (MSF), including day centres for those with disabilities and special student care centres, will reopen in phases from Tuesday (June 2).
— Straits Times (annoying popups)

Employers must let their foreign workers move to other dorms or work for other firms to get levy rebates: MOM
Employers here will have to let the Ministry of Manpower (MOM) move their foreign workers to different dormitories or work at another company in need of manpower, in order to get the foreign worker levy (FWL) rebates announced in last week’s Fortitude Budget.
— Straits Times (annoying popups)

Consumer loans dive in April as circuit breaker kicks in
CONSUMER loans in Singapore continued to dive in April, with credit card loans clocking their steepest fall on record as the Republic’s circuit breaker took effect on April 7, keeping people at home and most retail outlets shut, according to the latest data from the Monetary Authority of Singapore (MAS).
— The Business Times

Muis reiterates integrity of halal certification process following allegations
The Islamic Religious Council of Singapore (Muis) has said that it has not been approached by the Corrupt Practices Investigation Bureau (CPIB) in connection with any investigations, refuting allegations published in different foreign media.
— Straits Times (annoying popups)

Robertson Quay breaches: Seven to be charged with flouting rules
Six men and a woman, aged between 30 and 52, will be charged in court on Tuesday for flouting circuit breaker regulations.
— Straits Times (annoying popups)

Singapore Ambassador to the US defends Singapore’s handling of COVID-19 outbreak among migrants
Singapore’s response to COVID-19 is guided by science and the nation’s best understanding of the disease, said Singapore’s Ambassador to the United States Ashok Mirpuri in a letter dated 21 May to the editor of American news publication Foreign Policy published on the Ministry of Foreign Affairs website.
— The Online Citizen

Graduates can apply for over 11,000 traineeships from today
Graduates will be able to apply for traineeships under the SGUnited Traineeships Programme from today, Manpower Minister Josephine Teo said on Facebook yesterday.
— Straits Times (annoying popups)

Announcement on F1 race to be made this week
The fate of the Formula One race in Singapore this year will be made known soon.
— Straits Times (annoying popups)

Firms step up safety measures as more employees head back to work
With more employees heading back to on-site work this week, companies are taking steps to prevent exposure to the virus both within and outside the office.
— Straits Times (annoying popups)

Why Singapore cannot cut down on foreign workers the way other countries have
Is Singapore prepared to have 2,500 babies born here every year grow up to be construction workers?
— Straits Times (annoying popups)

HDB to launch 7,800 BTO flats in August sales exercise, services and construction activities to resume
The Housing and Development Board (HDB) will offer about 7,800 flats in its Build-To-Order (BTO) August 2020 sales exercise, it said in a press release on Friday (May 29), as Singapore readied itself to exit the COVID-19 circuit breaker period.
— Channel NewsAsia (very annoying popups)

New office to drive digitalisation nationwide and reach out to seniors, hawkers
1,000 digital ambassadors will be recruited by the end of June to help stallholders and seniors learn how to use digital tools.
— Straits Times (annoying popups)

Going the extra mile to keep Gardens by the Bay neat and tidy during the COVID-19 circuit breaker
Gardens by the Bay horticulturist Irene Chong, 32, crouched as she snipped off stalk after stalk of cat’s whiskers plant. Then she stood to throw the stalks into a big white bag beside. Then she crouched again.
— Channel NewsAsia (very annoying popups)

The day food delivery services left tummies growling
In the middle of this month, many Singaporeans took part in the Hunger Games.
— Straits Times (annoying popups)

Malaysian boy lives alone in Singapore for months, so that he won’t miss school during the COVID-19 outbreak
Left without adult supervision owing to COVID-19, this 14-year-old has had to learn to cook, do housework and deal with homesickness just to continue attending school.
— Channel NewsAsia (very annoying popups)

Businesses know they must play a waiting game after circuit breaker ends
For three years, Mr Dylan Ong, owner of The Masses restaurant, which is known for its Asian-inspired French cuisine, had resisted providing a delivery option for customers who wanted to eat at home or at work.
— Straits Times (annoying popups)

Coronavirus: Travel curbs see fewer trucks crossing Singapore-Malaysia border
These days, Malaysian lorry driver Muhammad Rizwan Muhammad sets off for Singapore at 7am and is able to make it back to his home in Johor Baru in time for lunch.
— Straits Times (annoying popups)

Commentary: The circuit breaker was a time many of us want to forget. Let’s make it count
As we exit the circuit breaker, the important lessons gleaned may help us better navigate the strange new world we are about to enter, says Annie Tan.
— Channel NewsAsia (very annoying popups)

Beyond the 3 Rs: How can Singapore move forward on sustainability?
GETTING people to care about the environment is an uphill battle that advocates around the world have been fighting for a long time.
— The Business Times

Hyflux says deal with Utico has ‘ceased’; studying revised offer and pursuing other investor options
Hyflux’s high-profile debt restructuring seems to be hanging in the balance again after it said on Friday (May 29) that its S$400 million rescue deal with Middle Eastern suitor Utico has ceased2 with the lapsing of the long-stop date earlier this week.
— Channel NewsAsia (very annoying popups)

Netizens disagree with government’s move to establish “travel bubbles”; say it’s too early
Singapore is in talks with several countries to establish a “travel bubble” to create safe travel arrangements to allow essential business travel to resume, said National Development Minister Lawrence Wong in a press conference on Thursday (28 May).
— The Online Citizen

Singtel’s annual net profit down 65.3 per cent thanks to Bharti Airtel investment through CECA
Singtel reported yesterday (28 May) that it has posted a 25.7 per cent fall in net profit to $574.4 million for its fourth quarter ended March 31, 2020, from $773 million a year ago.
— The Online Citizen

COVID-19: Retailers struggle amid uncertainties about reopening, recovery of sales
John Ng was hoping to use 2020 to get his new company StyleLab off the ground.
— Channel NewsAsia (very annoying popups)

Endofotonics secures US$12M in Series B funding round led by Singapore Medical Group
Singapore-based early cancer detection startup Endofotonics has raised US$12 million in a new round of funding, the company announced today.
— e27

Singaporean man divorces wife of 45 years over company she kept – cats
After being married 45 years, a retiree divorced his wife because of the cats she kept, one of which even urinated on his face.
— Straits Times (annoying popups)