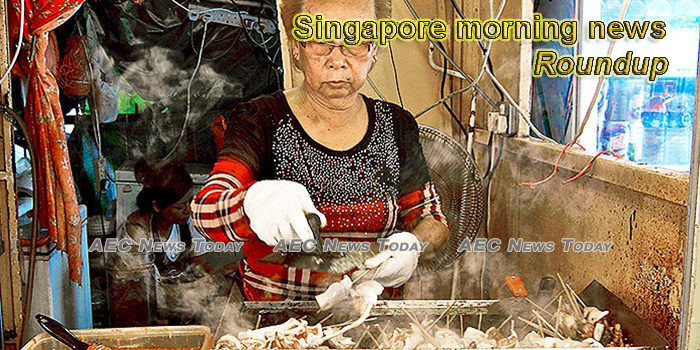 Dengue cases up again after five weeks of decline
There are now 86 active clusters, an increase of almost a third since the middle of last month.
— Straits Times (annoying popups)

Gas supply from Indonesia to Singapore will cease by 2023
By 2023, Indonesia’s Energy and Mineral Resources Ministry is looking to stop supplying gas to Singapore via the Suban Blok Corridor Field.
— The Online Citizen

S’pore pump prices at record highs after killing
Petrol pump prices have risen by three cents a litre at most retailers in Singapore, in the latest fallout on oil markets from the assassination of Iranian military leader Qassem Soleimani by US forces last week.
— Straits Times (annoying popups)

‘MOH advice’ on how not to catch influenza is a hoax
There is nothing wrong with drinking water, but the advice that is circulating on how to protect against influenza is not from the Ministry of Health (MOH).
— Straits Times (annoying popups)

‘That’s exactly what neighbours are about’: Australians welcome Singapore’s help to fight bush fires
The Republic’s deployment of two helicopters and 42 soldiers to Australia, in support of the country’s ongoing efforts to put out raging bush fires that have destroyed more than 2,000 homes, has been welcomed by Australians and Singaporeans.
— Straits Times (annoying popups)

MSF officials go on night walks to inform homeless people of available shelters & services
Many homeless people do not know where to seek assistance, and others may decline help or avoid contact with social services and government agencies.
— Mothership

SAF aid in firefighting efforts lauded by Aussies and S’poreans
Singapore’s deployment of two helicopters and 42 soldiers to Australia, in support of the country’s ongoing efforts to put out raging bush fires that have destroyed more than 2,000 homes, has been welcomed by Australians and Singaporeans.
— Straits Times (annoying popups)

Productivity tops Singapore SME priority list in 2020: poll
SMALL and medium enterprises (SMEs) in Singapore will focus on boosting productivity as they grapple with a mixed business outlook this year, according to a survey by United Overseas Bank (UOB).
— The Business Times

Spike in people scammed by impersonators on social media, with many in their 20s to 40s
The scammers in these cases often use compromised or spoofed social media accounts to pretend to be a victim’s family member or friend to trick victims.
— Straits Times (annoying popups)

Payment delays worsen among Singapore firms for 3rd straight quarter
Slow payments among Singapore firms increased for the third consecutive quarter, led by the retail and services sectors, according to a report by the Singapore Commercial Credit Bureau (SCCB) on Tuesday (Jan 7).
— Straits Times (annoying popups)

MINDEF will strengthen oversight of vendors after possible data leaks: Ng Eng Hen
The Ministry of Defence (MINDEF) will strengthen oversight of its vendors after two of them were hit separately by potential data breaches, said Minister for Defence Dr Ng Eng Hen in a written parliamentary reply on Monday (6 Jan).
— Channel NewsAsia (very annoying popups)

Boosting productivity beats cutting costs as top priority for SMEs this year: Survey
Small and medium enterprises (SMEs) in Singapore will focus on boosting productivity as they grapple with a mixed business outlook this year, according to a survey by United Overseas Bank (UOB).
— Straits Times (annoying popups)

SP grad refuses to take ‘no’ for an answer, gets into NUS medical school on 2nd try
Foo’s tenacity and refusal to give up allowed him to become one of the 11 polytechnic graduates in 2017 to be offered a local medical course.
— Mothership

SDP: Manpower Minister’s failure to provide explanation for rejecting correction directions is a “cop-out”; Party to pursue matter in court
The Singapore Democratic Party (SDP) has pointed out that the Minister of Manpower Josephine Teo’s decision to reject the party’s correction directions under the Protection from Online Falsehoods and Manipulation Act (POFMA) without providing any grounds is a “cop-out”.
— The Online Citizen

How effective PR can be a game changer for tech startups in 2020?
Bill Gates famously said that “If I was down to my last dollar, I’d spend it on PR.”
— e27

More shophouses up for sale in Tanjong Pagar, East Coast and Geylang
With robust demand seen for shophouses last year, the start of 2020 saw the latest slew of such invetment properties up for sale.
— Straits Times (annoying popups)

Shopee parent Sea makes only known solo bid for digital full bank licence
Sea Limited, which owns e-commerce platform Shopee and game developer Garena, is the latest known contender for a full digital bank licence – and the only one known to be going it alone.
— Straits Times (annoying popups)

S’porean man seeks explanation on his arrest, subsequent extradition to M’sia over non-existing murder charge
A 50-year-old Singaporean man is seeking an explanation from the Republic’s authorities regarding his arrest by the Singapore Police Force (SPF) — and his subsequent extradition by the Malaysian Police — on 21 Mar 2015 over a charge made against him for a murder that took place in Penang Island.
— The Online Citizen

Customer finds stone in Tiong Bahru Bakery cake, staff tells him it’s part of French tradition
One customer in Singapore was alarmed to find a stone nestled inside a cake purchased from Tiong Bahru Bakery.
— Mothership

M’sia Grab driver travels 200km from Melaka to Johor to return S’porean passenger’s Prada wallet
A Grab driver in Melaka travelled over 200km just to return a passenger’s wallet that was left in his car, Lianhe Wanbao reported Jan. 7, 2020.
— Mothership

Animal lover fined for harassing woman he thought ran over dog
Thinking that a woman was the driver of a car that ran over a dog, a man posted abusive messages on Facebook against the woman.
— Channel NewsAsia (very annoying popups)

Jealous tourist jailed for attacking girlfriend and cops in MBS
Jealous that his girlfriend had danced with another man, a tourist from New Zealand assaulted her in their hotel room at the Marina Bay Sands (MBS).
— Straits Times (annoying popups)

Man allegedly dislocates woman’s jaw after being rejected
A man who allegedly pestered two women at a bar in Prinsep Street last Friday (Jan 3), also allegedly elbowed one of them in the face after they rejected his advances, dislocating her jaw.
— Straits Times (annoying popups)