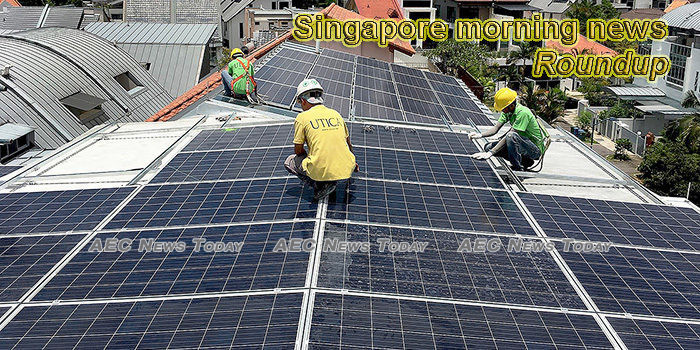 Singapore port container throughput hits record high in 2019: MPA
CONTAINER throughput at the Port of Singapore hit an all-time high of 37.2 million twenty-foot equivalent units (TEUs) in 2019, the Maritime and Port Authority of Singapore (MPA) announced in a press release on Monday.
— The Business Times

S’porean kidnapped, tortured & nearly buried alive in Thailand over bitcoins
A Singaporean man was recently kidnapped by another Singaporean and held hostage for bitcoins.
— Mothership

Facilities determine where heart attack victims are taken
It is not always distance that determines which hospital should treat a patient in a critical condition.
— Straits Times (annoying popups)

Citizens from new markets among buyers of top condos here
THE cooling measures introduced in July 2018 have dampened overall home-buying demand but in the top end of the condo market, foreigners may have shown more resilience.
— The Business Times

Case against Pofma corrections should be heard in open court: SDP
The Singapore Democratic Party (SDP), which has had two correction directions issued against it under the fake news law, will request to have its case challenging the corrections heard in an open court.
— Straits Times (annoying popups)

Aware wants Budget 2020 to give caregivers of elderly family members a monthly income
People caring for older family members should be given a monthly income regardless of whether they are working, said the Association of Women for Action and Research (Aware) on Monday (Jan 13).
— Straits Times (annoying popups)

Releasing personal information in the public interest while withholding statistical data for the same reason?
In recent weeks, we’ve seen the government fall on two ends of a spectrum relating to releasing information for the sake of public interest.
— The Online Citizen

O-level results: She scores 7 distinctions despite having to miss most classes due to illness
Racked by pain from illness in the last year and a half in secondary school, Sherry Lim Xuan Ying had to miss most of her lessons.
— Straits Times (annoying popups)

Singapore’s lost palaces: Researcher locates 20 former istanas
Singapore was once home to as many as 30 istanas, some of which were located in heartland areas, such as Bedok, Serangoon Road and Telok Blangah.
— Straits Times (annoying popups)

Jail & caning for S’pore PR, 24, who badgered 13-year-old girl into having sex with him in car park staircase
He had only been released from reformative training for similar offences four months prior to this incident.
— Mothership

Man admits to taking upskirt and shower videos of women at Yale-NUS college
A man living in a suite with five female students at Yale-NUS College took intrusive videos of four of them.
— Channel NewsAsia (very annoying popups)

Thieving maid served family food mixed with her urine and blood, gets jail
A maid served the family she was working for rice and water mixed with some of her urine, saliva and menstrual blood, hoping that they would agree with her and not scold her for her work performance.
— Channel NewsAsia (very annoying popups)

S’porean actor Thomas Ong dropping out of Showbiz, planning to sell crystals online
His interest in crystals started last year due to an ambassadorship.
— Mothership

Woman hospitalised after falling from 4th floor Whampoa flat collecting laundry
A 27-year-old woman collecting her laundry was taken to the hospital after she lost her balance and fell from the fourth floor of a block along Whampoa Drive, according to Shin Min Daily News.
— Mothership

Cleaner who caused hurt to baby son by rash act fined $4,500
A cleaner who pressed his six-month-old son’s neck against a mattress, causing the baby to cry in pain, was fined $4,500 on Monday (Jan 13).
— Straits Times (annoying popups)

Close shave for female biker as iron pipe hits her on PIE
When she saw an object flying from an open-top lorry towards her motorcycle, she thought it was a piece of string.
— Straits Times (annoying popups)