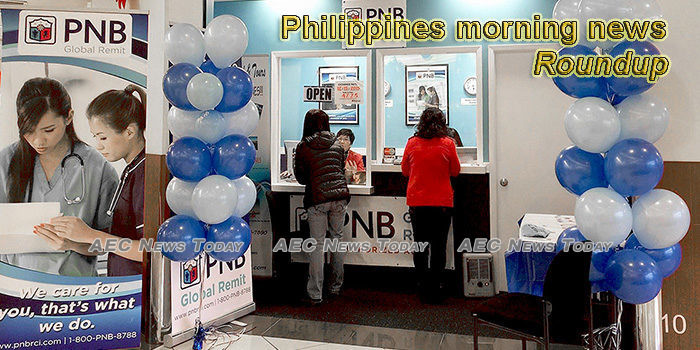 Philippines must pass anti-terrorism bill to stay off ‘grey list’, council warns
The Philippines risks being included in an international grey list of nations falling short of global money-laundering rules if it fails to enact and effectively implement a new anti-terrorism bill, its anti-money laundering body warned on Saturday (Jun 13).
— CNA

No medical certificate, no boarding for domestic air, sea travel: Gov’t task force
People who want to travel domestically by air or sea first need to provide a medical certificate stating that they are not infected with the novel coronavirus, according to the government body tasked to implement the guidelines to curb the spread of COVID-19.
— ABS-CBN News

PRRD mulls MECQ, 2 other options in Metro Manila, Cebu
President Rodrigo Roa Duterte is weighing in on three options for the new quarantine classification to be implemented over Metro Manila and Cebu by June 16.
— Philippine News Agency

Cyberlibel case vs Rappler chief due for decision
Journalist Maria Ressa is the defendant in a cyberlibel case set to be decided on Monday, but the decision is expected to send shock waves across the media industry.
— Philippine Daily Inquirer

DOH: Recent spike in coronavirus deaths due to ‘late reports’
After over 20 deaths were added to the Philippines’ coronavirus death toll on Saturday, June 13 – adding to the 16 new deaths reported on Friday, June 12 – the Department of Health (DOH) explained that these deaths did not occur on those days alone, and were due to late reporting.
— Rappler

Public warned vs dengue, leptospirosis even as COVID-19 persists
An infectious disease expert on Sunday warned the public against diseases common during the rainy season even as the country continues to battle the COVID-19 pandemic.
— ABS-CBN News (video)

‘Balik Probinsya’ to return – Palace
The “Balik Probinsya, Balik Pag-Asa” program will resume after the government has assisted the people stranded in Metro Manila, according to Malacañang.
— Philippine Star

DOH apologizes for errors in daily reports
The Department of Health (DOH) on Sunday apologized for the mistakes in its daily situationer reports that made the rounds on social media after some netizens noticed an erroneous bar graph.
— GMA Network

U.S. thanks PH for delaying VFA termination, promises vaccine
US Defense Secretary Mark Esper on Friday, June 12, thanked the Philippines for suspending the termination of the Visiting Forces Agreement (VFA), a sudden decision by the Duterte administration prompted by the coronavirus pandemic.
— Rappler

House of terror: How the lower chamber let slip a ‘killer’ bill
A Commander-in-Chief eager to please his generals, a Speaker loyal to the President, and lawmakers who turned a blind eye to the red flags – this is how the anti-terror bill was railroaded in the House.
— Rappler

Health workers with COVID-19 now 2,869; recoveries up to 1,839
The number of healthcare workers who have contracted the coronavirus disease 2019 (COVID-19) climbed to 2,869 as of June 13, the Department of Health (DOH) reported on Sunday.
— GMA Network

NUJP: Rappler libel case part of gov’t campaign to intimidate media
The National Union of Journalists of the Philippines (NUJP) on Sunday called on the courts to uphold judicial independence on the cyber libel case filed against Rappler officials.
— GMA Network

Lacson all in for anti-terror bill, vows to be eagle-eyed, vigilant vs. abuse
Senator Panfilo Lacson, a principal author of the controversial Anti-Terrorism Bill, said he is all in in support of it and that he will be eagle-eyed and vigilant in guarding against abuse of the measure.
— GMA Network

Number of Filipinos abroad with coronavirus now at 5,541
Another 22 Filipinos tested positive for the coronavirus , raising to 5,541 the total number of coronavirus cases involving Filipinos overseas, announced the Department of Foreign Affairs (DFA) on Sunday, June 14.
— Rappler

DOST eyes melatonin as part of COVID-19 treatment
The Department of Science and Technology (DOST) has allotted P9.8 million to conduct clinical trials on the use of melatonin, taken usually by persons having trouble to sleep, as a supplementary treatment for the new coronavirus disease (COVID-19).
— Philippine Daily Inquirer

Anti-terror bill to spare youth from armed groups’ recruitment
The proposed anti-terrorism bill will serve as a strong backbone against violent extremism and recruitment of youth into the armed movement, the League of Parents in the Philippines (LPP) said Sunday.
— Philippine News Agency

P13 billion revenue lost due to pandemic — PCSO exec
The Philippine Charity Sweepstakes Office (PCSO) has lost an estimated P13 billion in revenue following the suspension of its gaming operations due to the coronavirus disease 2019 (COVID-19) pandemic.
— Philippine Star

Democracy faces ‘death by a thousand cuts’ with looming anti-terror law – Maria Ressa
The impending passage of the anti-terrorism bill into law could institutionalize the abuses of the government, Rappler CEO and executive editor Maria Ressa said Saturday, June 13.
— Rappler

DOH says country’s mid-June COVID-19 death rate down, below global average; PHL COVID-19 cases near 26,000 mark
The number of coronavirus disease 2019 cases in the country is nearing the 26000 mark after the Department of Health reported 539 cases on Sunday, June 14.
— Eagle News

3,500 freeport workers to lose jobs due to COVID
Some 3,500 workers will be affected by the retrenchment program that will be implemented by 20 companies based in this freeport due to the coronavirus disease 2019 or COVID-19.
— Philstar

Congress urged to give incentives to cyclists
Rep. Ronnie Ong of Ang Probinsyano party-list is proposing to Congress to grant incentives to people who use bicycles in their daily commute to their workplace.
— Business Mirror

Release of small business workers’ subsidies nearing completion
Payouts are at more than 97-percent completion for both tranches of the two-month Small Business Wage Subsidy (SBWS) program for workers of small businesses affected by the coronavirus pandemic, according to a ranking official of the Department of Finance (DOF).
— Philippine News Agency

Local carriers to public: Don’t go to airport without confirmed flight
The Air Carriers Association of the Philippines (ACAP) on Saturday, June 13, urged members of the public to proceed to the airport only when they have confirmed flights.
— Eagle News

Go wants greater benefits for single parents
Sen. Bong Go yesterday renewed his call for the passage of a bill that aims to provide additional benefits and privileges to 14 million solo parents in the country, helping them ease the burden of single-handedly raising their children.
— Philippine Star

Scrap collector, laborers turn to begging after losing jobs
For the past month, scrap collector Larry Lim has been standing at the corner of Bayani Road and Lawton Avenue in Taguig, looking for good Samaritans who would give money for him and his family.
— Philstar

We can never let our guard down against terrorism, says Cayetano
The country should always be vigilant against acts of terrorism and be on the lookout for whatever terrorists plan to do, Speaker Alan Peter Cayetano said.
— GMA Network

Students allege harassment, procedural violations in Iligan City protest arrests
None of the 13 student protesters arrested in Iligan City on Independence Day were read their Miranda rights as they were apprehended by police, who later interrogated and intimidated them throughout their eight hours in detention, witnesses and supporters said.
— Philstar

68 DOJ employees test positive in coronavirus rapid test
The Department of Justice (DOJ) said on Sunday, June 14, that 68 out of its 536 employees tested positive for the coronavirus after undergoing rapid antibody testing.
— Rappler

Riding someone else’s motorcycle? Be ready to prove you’re not a criminal
Those riding motorcycles that are not registered in their name may need to provide proof that they are authorized to do so, the Land Transportation Office said as Republic Act 11235 — also called the Motorcycle Crime Prevention Act — comes into force.
— Philippine Star

Arrest warrants out vs Yanson siblings over carnapping charges
A regional trial court last week issued warrants of arrest against four members of the Yanson family and their alleged accomplices for allegedly stealing vehicles belonging to the country’s biggest bus firm almost a year ago.
— Philstar

Exporters back stimulus plan to support investors, MSMEs
The umbrella group of the country’s exporters is pushing for stimulus measures such as the Accelerated Recovery and Investments Stimulus for the Economy (ARISE) bill, COVID-19 Unemployment Reduction Economic Stimulus (CURES) and the proposed reduction of the corporate income tax (CIT) rate to 25 percent, to support investors and micro, small and medium enterprises (MSMEs).
— Philippine Star

More NegOcc villagers condemn CPP-NPA atrocities
Five barangays in Negros Occidental were the latest to condemn the atrocities of the Communist Party of the Philippines-New People’s Army (CPP-NPA) and its political wing, the National Democratic Front (NDF).
— Philippine News Agency

DOTr says EDSA will have bike lanes by early next week
Construction on protected bike lanes along Epifanio delos Santos Avenue — Metro Manila’s main highway — is expected to be completed in a matter of days to allow cyclists safe travel amid the general community quarantine, the Department of Transportation said Saturday.
— Philippine Star

Manila bishop seeks end to limits on religious services amid GCQ
Manila Archdiocese Apostolic Administrator Bishop Broderick Pabillo on Sunday urged the national government to lift the limitations on the number of persons allowed in religious services in areas under a general community quarantine.
— GMA Network

The doctor healing the wounds of war in Basilan
Two Huey helicopters circled over the town of Mohammad Ajul for hours on October 4, 2019.
— Rappler

DOT boosts digital platform to sustain online presence
The Department of Tourism (DOT) is boosting its online presence with a number of digital initiatives, in line with keeping the Philippines a top-of-mind destination among its foreign and domestic markets.
— Philippine Star

Lao Morning News For May 15