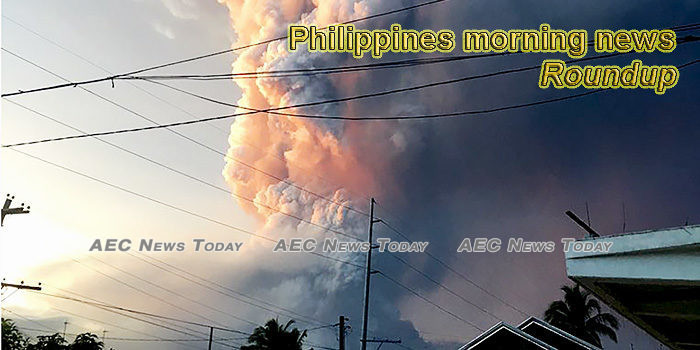 NAIA flights ‘on hold’ due to Taal Volcano ash eruption
All flights at the Ninoy Aquino International Airport (NAIA) were put on hold following the ash eruption of the Taal Volcano in Batangas on Sunday, January 12.
— Rappler

Finish projects under my watch, PRRD to Cabinet execs
President Rodrigo Duterte has reminded his Cabinet secretaries to ensure that all the projects in their respective departments will be completed before his term ends in 2022.
— Philippine News Agency

PRRD asks authorities to aid in evacuation of residents near Taal
President Rodrigo Roa Duterte ordered authorities to undertake measures necessary to place the people within the perimeter of Taal Volcano out of the danger zone.
— Philippine News Agency

500,000 Mindanao kids get anti-polio shots
Almost half a million children in Basilan, Sulu and Tawi-Tawi have been immunized against polio, according to the World Health Organization.
— The Philippine Star

Duterte line veto sought on alcohol, e-cigarette bill
The Department of Finance (DOF) is asking President Duterte to veto a provision in the newly approved sin tax bill, which prohibits government authorities from investigating alcohol and electronic cigarette firms without a court order.
— The Philippine Star

PH will no longer send military ‘battalions’ to accompany Iraq evacuees
The government has changed its mind about sending “two battalions” from the military to assist Filipinos evacuating Iraq, the Department of National Defense said late Sunday, January 12.
— Rappler

Solon wants salary of public, private sector nurses matched
Anakalusugan party-list Representative Michael Defensor on Sunday called on the Department of Labor and Employment (DOLE) to bring the monthly minimum wage of nurses in the private sector to P32,053 or higher, making it similar to what their counterparts in government health institutions receive.
— GMA Network

At least 3 Batangas towns evacuate as Taal Volcano spews ash
At least 3 towns near the Taal Volcano began to evacuate their residents after the volcano started spewing ash on Sunday, January 12.
— Rappler

Fuel marking scheme starts with 1.1b liters
The government already marked 1.1 billion liters of petroleum products under the fuel marking program ahead of the tax scheme’s full implementation by February 2020, Finance Secretary Carlos Dominguez III said over the weekend.
— Manilastandard.net

OFW Villavende sexually abused, battered before death – NBI autopsy
Overseas Filipino Worker (OFW) Jeanelyn Villavende was sexually abused and physically battered for weeks before she died in the hands of her employer in Kuwait, the Department of Justice (DOJ) said.
— Rappler

AFP to Pinoys in Mideast: Consider repatriation amid possibility of war
The Armed Forces of the Philippines on Sunday urged Filipinos in the Middle East to consider going back to the country, as the possibility of a full-blown, US-Iran war looms.
— GMA Network

DOH advises public to stay indoors, use dust masks vs Taal ashfall
The Department of Health (DOH) on Sunday released guidelines on how to deal with an ashfall following the phreatic explosion at the Taal Volcano.
— GMA Network

Duterte contented enough; won’t seek term extension
President Rodrigo Duterte rejected anew speculations that he wanted to extend his term in office, saying that he is contented and ready to bow out.
— Philippine News Agency

PHL rice stockpile at highest level in 2.5 years due to imports
The country’s total rice inventory as of December 2019 rose by 14 percent to over 3 million metric tons (MMT), the highest in more than two-years-and-a-half, the Philippine Statistics Authority (PSA) said in a report.
— Business Mirror

Out-of-pocket health expense of elderly Pinoys rising–Pids
Despite the inclusion of more elderly Filipinos in the government’s health insurance, their out-of-pocket (OOP) medical expenses went up, according to a discussion paper published by the Philippine Institute for Development Studies (Pids).
— Business Mirror

40% of PHL Catholics don’t know their baptismal dates – Veritas poll
AROUND 40 percent of Filipino Catholics are still unaware of the exact date of their Holy Birthday or the day of their baptism.
— Business Mirror

ACT-CIS solon open to refiling Parking Liability Bill
ACT-CIS party-list Representative Niña Taduran said on Sunday that she was open to refiling a measure seeking to make the management of parking establishments liable for any loss or property damage suffered by motorists who parked their vehicles within their premises.
— GMA Network

Nolasco Bathan: The general who snatched a journalist’s phone
When Police Brigadier General Nolasco Bathan snatched a reporter’s phone, nothing prepared him for all the condemnation that came with it.
— Rappler

‘Domestic spat’ behind Camp Aguinaldo grenade blast – AFP
The Armed Forces of the Philippines (AFP) said an argument between a soldier and his wife appears to be the cause of the grenade blast that happened in the military headquarters at Camp Aguinaldo on Sunday morning, January 12.
— Rappler

Dela Rosa: Public perception better gauge of drug war success or failure
For Senator Ronald Dela Rosa, the public’s perception of the war on drugs is the better indicator of whether it has failed or succeeded.
— GMA Network

Gov’t peace adviser dismisses CPP-NDFP’s CASER as obsolete, irrelevant
Presidential Peace Adviser Carlito Galvez Jr. said that Filipinos did not need the Comprehensive Agreement on Social Economic Reforms (CASER), a joint agreement being formed between the Philippine government and National Democratic Front of the Philippines (NDFP) regarding social and economic reforms, because of its obsolete framework and questionable provisions.
— GMA Network

Vico Sotto slams trolls after saving P9M in cost of Pasig’s giveaway calendars
Pasig Mayor Vico Sotto hit back at online trolls who said he bloated the cost of printing copies of the city’s official calendar, when in fact he was able to cut it down to less than half the approved price.
— Rappler

De Lima thanks U.S. Senate for ‘standing strong for larger truths’
Detained opposition Senator Leila de Lima is grateful to the United States Senate for approving a resolution that seeks sanctions against Philippine officials linked to her detention and to the alleged extrajudicial killings under the Duterte administration.
— Rappler

‘A man of vision and foresight’: PH gov’t mourns passing of Oman leader
Malacañang and the Department of Foreign Affairs (DFA) expressed condolences to Oman as the sultanate by the Arabian Sea mourned the passing of Sultan Qaboos , the longest-reigning leader of the Arab world who ruled his country for nearly 5 decades.
— Rappler

Japan’s MOS Burger to open first pop-up store in Metro Manila
Great news, MOS fans – the Japanese burger chain is finally popping up at the second level of Robinsons Galleria for a two-day pop up store on Wednesday, January 15, and Thursday, January 16!
— Rappler

Police identify man who was skinned and killed in northern Cebu
Police identified the man who was killed and found in Carmen town on Friday with his face skinned off as Marco Corbo, 34, of Mandaue City.
— Rappler

Mendoza family urges ‘client’ of slain ex-Batangas congressman to help cops
The son of slain former Batangas 2nd District representative Edgar Mendoza has appealed to the still unidentified client of their father – believed to be the last person Mendoza met before his death – to come forward and help authorities investigating his father’s case.
— Rappler