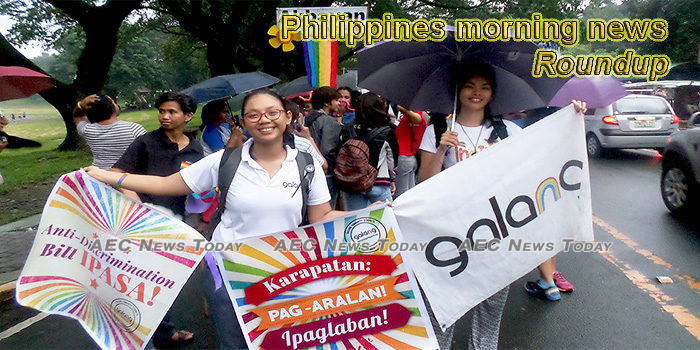 China pursues crackdown on POGO workers, identifies violators
China said Sunday that it has obtained a list of Chinese nationals working for online gaming operations in the Philippines, in an ongoing effort to curb gambling and entities defrauding the country.
— GMA Network

PAO readies more cases as vaccine claims 13-year-old its 153rd victim
The Public Attorney’s Office said 153 children have now died after being given the anti-dengue vaccine Dengvaxia, with the death of a 13-year-old boy who had received a single dose of the controversial drug.
— Manilastandard.net

Retailers breaching SRP for 9 items face sanctions from DA
UNSCRUPULOUS retailers will now be penalized if they go beyond the set suggested retail prices (SRP) by the Department of Agriculture for various commodities starting today (Monday) as it seeks to curtail profiteering in the market.
— Business Mirror

49 quarantined in New Clark City cleared of COVID-19, sent home
The 49 people who were quarantined at the New Clark City in Capas, Tarlac, were sent home on Saturday, February 22, after 14 days of isolation for the novel coronavirus or COVID-19.
— Rappler

PH gov’t urged to brace for tourism dip due to virus outbreak
House Deputy Speaker Johnny Pimentel urged the government to brace for a drop in tourism resulting to loss of thousands of jobs due to the 2019 novel coronavirus (2019-nCoV) that broke out in China, a major market in the Philippine hospitality industry.
— Rappler

‘No impact’ on fuel supply if ‘onerous’ Chevron land rental not renewed – DOE
The Department of Energy (DOE) said there would be no impact on the country’s fuel supply if oil firm Chevron Philippines’ lease contract for a property in Batangas would not be renewed by the government.
— Rappler

Gov’t urged to draw up retooling, jobs plan amid Covid-19 threat
A lawmaker on Sunday urged the government to draw up an emergency skills retooling and jobs plan for thousands of workers facing retrenchment as the tourism and travel sectors struggle to reduce their capacities amid the coronavirus disease 2019 (Covid-19) outbreak.
— Philippine News Agency

PHL-South Korea FTA Seen finalized in April
THE free trade agreement (FTA) between the Philippines and South Korea is now expected to be finalized by April, as optimism toward a conclusion rose after the two parties revamped their lineup of negotiators.
— Business Mirror

Philippines banks urged to stopfunding coal projects
Philippine banks have been urged to stop funding the coal industry after extending $6.3 billion worth of loans over the past three years.
— The Philippine Star

Public will appreciate war on drugs thru harmonized data: PNP
An official of the Philippine National Police (PNP) has emphasized the need to come out with harmonized data to help the public appreciate that the government is actually winning war against illegal drugs.
— Philippine News Agency

Vico Sotto shuts down illegal Chinese restaurant in Pasig, says no to POGO
Pasig City Mayor Vico Sotto on Sunday, February 23, issued a stern warning against illegal businesses and workers, as he ordered the shutdown of a Chinese restaurant that lacked permits to operate from the city government.
— Rappler

More firms eye bidding for Manila subway contracts
MORE Japanese and local companies have shown their interest in two contracts under the first phase of the Metro Manila Subway Project which will be bid out in mid-March.
— BusinessWorld

More Filipino women in senior business roles
THE Philippines has topped the list of 32 countries in a global survey on the role of women in senior management. Read the full story.
— BusinessWorld

The low-key carnage of niche PH tech jobs
Financial services giant Wells Fargo, for one reason or another, broke the pattern of silence on the technology employment front.
— Manila Times

Duterte says intel confirmed ‘pastillas’ scam within BI, scoffs at Trillanes anew over Bikoy mess
President Rodrigo Duterte said he was able to confirm, through intelligence information, the existence of the pastillas scheme within the Bureau of Immigration, in which Chinese nationals allegedly paid thousands of pesos in exchange for being escorted through the immigration process.
— GMA Network

Sereno slams silent Duterte critics as enablers
In a bold speech that accused President Rodrigo Duterte of killing the Philippine Constitution, former chief justice Maria Lourdes Sereno slammed the silent critics as enablers of what she called an anti-reason and anti-science government.
— Rappler

Gov t to give P20-M to conflict-cleared barangays – Año
Interior Secretary Eduardo Año revealed that the government planned to give P20 million to barangays cleared of conflict and P1.5 million to areas threatened by conflict.
— GMA Network

Flight attendant who repatriated Pinoys from Wuhan was a former OFW
One of the flight attendants who helped repatriate Filipinos from Wuhan, China–the epicenter of the coronavirus disease 2019 outbreak–used to be a migrant worker herself.
— GMA Network

Lanao Del Sur youth urged to end culture of violence
Youth leaders from seven municipalities across Lanao del Sur were urged to help the government put an end to the culture of fear and violence in their communities during the Provincial Youth Leadership Summit (YLS) held here Saturday.
— Philippine News Agency

Quirino MSME ordinance to benefit over 3,000 small entrepreneurs
With the approval of Provincial Ordinance No. 24, some Micro, Small and Medium Enterprises (MSMEs) here which business capitalization does not exceed P100 million are assured of government support to ensure their continuing viability and growth.
— Philippine Information Agency

Prostitution in the Philippines: What the headline-grabbers are not saying
Recent hearings in our legislatures on prostitution, taxation and immigration related to Philippine offshore gaming operators (POGOs) are legitimate items to address.
— Manila Times

Filipino-Americans ‘fired up’ as Tagalog added to Nevada ballot
Manny Pacquiao, roast pig dinners and prayer services: Activists are using every tool possible to get the booming Filipino-American community in Las Vegas to the polls for Saturday’s Democratic nomination vote.
— Rappler