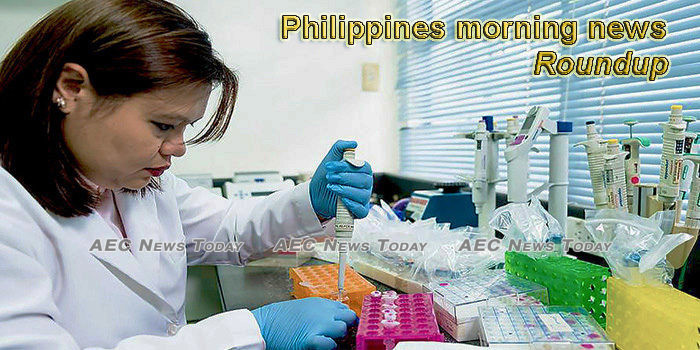 Trump brushes aside Philippines’ decision to end military pact with US
US President Donald Trump on Wednesday (Feb 12) brushed aside the decision of Philippines President Rodrigo Duterte to end a decades-old military agreement with United States, saying he didn’t really mind and it would save money.
— CNA

Coronavirus imperils Duterte’s plan to cash in on China
Every February, travel agents in the Philippines are busy arranging Chinese visitors’ itineraries and locals’ upcoming summer trips, but this year has been different.
— Nikkei Asian Review (paywall)

Duterte to boost China, Japan ties post-VFA
THE Philippine military will boost defense ties with allies in the region including China, Japan and Australia after President Rodrigo R. Duterte ended a military agreement with the US on the deployment of troops for war games, its new chief said on Wednesday.
— BusinessWorld

Malacañang Press Corps expresses solidarity with ABS-CBN as franchise expiry nears
Reporters covering President Rodrigo Duterte and his office on Wednesday urged for the protection of press freedom and the people’s right to information amid a government attempt to revoke the franchise of media giant ABS-CBN.
— GMA Network

Philippines keeps ranking in US IP index
The Philippines kept its ranking in the US Chamber of Commerce (USCC) International Intellectual Property (IP) Index 2020, but it registered a higher overall score from a year ago amid efforts against online counterfeiting and piracy.
— The Philippine Star

Rights, labor welfare issues may cost PHL’s trade perk with EU
The European Union is dismayed with the Philippines’s failure to comply with its commitments on human rights and labor welfare, risking the country’s trade privilege with the economic bloc benefiting nearly €2 billion worth of exports.
— Business Mirror

‘Virus may cost 95,000 jobs in tourism sector’
THE new coronavirus (COVID-19) could cause the tourism sector to lose as much as P22.7 billion a month and shed 95,000 jobs, the National Economic and Development Authority (Neda) told lawmakers in a hearing on Wednesday.
— Business Mirror

Lawmakers call for passage of ‘gig economy’ measures
AS the country’s so-called gig economy industry continues to rise, lawmakers are pushing for measures to protect freelance workers by establishing a basic regulatory framework to enable them to anticipate challenges ahead.
— Business Mirror

Philippine military chief: We will live without VFA with US
Armed Forces chief of staff General Filemon Santos Jr. expressed confidence Wednesday that the Philippine military would survive even without the Visiting Forces Agreement with the United States.
— GMA Network

No abuse of broadcast privilege, PRRD assures media
President Rodrigo Duterte on Wednesday guaranteed the Philippine media that his administration will not allow any possible abuse of privileges vested in them.
— Philippine News Agency

ABS-CBN says it has no unpaid bank obligations nor tax liability
AMID criticisms and the latest move from the government to revoke its franchise, embattled media network ABS-CBN Corp. on Wednesday clarified that it has no unpaid taxes to the Bureau of Internal Revenue (BIR) nor unpaid obligations to any bank.
— BusinessWorld

P1,500 pay hike set for “kasambahay” in Region XII
Domestic helpers or “kasambahay” in SOCCKSARGEN Region will soon receive an increase of P1,500 in their monthly salary as soon as the wage order issued by the Regional Tripartite Wages and Productivity Board (RTWPB) XII becomes effective.
— Philippine Information Agency

The story of how the Philippines got its name is attached to this soon-to-be-auctioned map
On February 22, Leon Gallery will put this rare Giovanni Battista Ramusio map under the hammer.
— ABS-CBN News

Taiwan may cancel visa-free entry for Filipinos due to PH travel ban – MECO
Then chairperson of the Manila Economic and Cultural Office (MECO) in Taipei warned on Wednesday, February 12, that Taiwan could cancel visa-free privileges for Filipinos in retaliation for its inclusion in the travel restrictions imposed by the Philippines in relation to the novel coronavirus outbreak.
— Rappler

PCOO eyes 80% success rate in eFOI requests by 2022
The Presidential Communications Operations Office (PCOO) said Wednesday it is targeting to achieve an 80-percent success rate in processing electronic Freedom of Information (FOI) requests by the end of the Duterte administration in 2022.
— Philippine News Agency

DepEd to allow class suspensions due to COVID-19
The Department of Education (DepEd) on Wednesday said it will allow the suspension of classes in schools and areas where there are confirmed coronavirus disease 2019 (COVID-19) cases.
— GMA Network

PH coronavirus watch: Suspected cases per region, as of February 12, 2020
The Philippines is now ramping up its probe of people with symptoms to prevent the spread of the 2019 novel coronavirus.
— Rappler

Expert says US forces to remain in Philippines even with VFA gone
The presence of the US forces in the Philippines will continue even without the Visiting Forces Agreement, a political science and national defense expert said on Wednesday.
— GMA Network

Divorce in PH won’t be ‘quickie’ — House panel
DIVORCE in the Philippines will not be a “quickie” process to dismantle marriages, the chairman of the House of Representatives’ Technical Working Group (TWG) said on Wednesday.
— Manila Times

Taiwan expresses ‘grave concern’ over inclusion in PH travel ban
The Taipei Economic and Cultural Office in the Philippines (TECO) denounced the Duterte administration’s move to include Taiwan in travel restrictions imposed over the novel coronavirus .
— Rappler

DA confirms 1st case of ASF in Davao Sur
The Department of Agriculture in Davao Region (DA-11) confirmed Wednesday that two of the four villages in Davao del Sur under tight watch for African Swine Fever (ASF) have been found positive of the animal disease.
— Philippine News Agency

Ombudsman clears NoCot guv of graft
The Office of the Ombudsman has dismissed for lack of evidence the graft complaint against North Cotabato Governor Nancy Catamco.
— Philippine News Agency

‘PH to lose 1.1 MMT of pork this year’
THE Philippines could lose 1.1 million metric tons (MMT) of dressed pork this year if the African swine fever (ASF) continues to spread in the country, the Philippine Veterinary Drug Association (PVDA) said.
— Manila Times

Tax court allows Makati gov’t to check Smart’s books over P3.2-B tax case
The Court of Tax Appeals (CTA) has allowed Makati City to check the financial records of Smart Communications Incorporated, in line with the local government’s bid to collect P3.2 billion in alleged unpaid taxes and fees from the firm.
— Rappler

Phivolcs proposes community-based landslide warning system for Cotabato
THE PHILIPPINE Institute of Volcanology and Seismology (Phivolcs) is eyeing to install an early warning system (EWS) in landslide-prone areas in Cotabato, one of the provinces at the foot of Mt. Apo and the most affected by the series of strong earthquakes that struck Mindanao last year.
— BusinessWorld

3 Koreans, 8 Japanese wanted for fraud arrested
THREE KOREANS and eight Japanese who are all wanted for fraud in their countries have been arrested in different parts of Luzon, the Bureau of Immigration (BI) reported on Wednesday.
— BusinessWorld

Panagbenga opening moved to late March as precaution vs coronavirus
Baguio City has moved the grand parade of the Panagbenga Flower Festival to late March, even as the other Cordillera towns scrapped their own festivals over concerns with the spread of novel coronavirus.
— Rappler

DSWD eyes completion of Soccsksargen poverty survey this month
The Department of Social Welfare and Development (DSWD)-Region 12 (Soccsksargen) is pushing for the completion within the month of the ongoing assessment of poor households in the region for possible inclusion into the government’s social protection programs.Cezario Joel Espejo, DSWD-12 director, said Wednesday they already …
— Philippine News Agency

Davao Oriental’s P22B anti-insurgency program gets regional approval
A P22-billion program intended to address the communist insurgency in Davao Oriental has been approved at the regional level, and the big-ticket projects will be endorsed for national funding, the provincial government announced earlier this week.
— BusinessWorld