Myanmar morning news for May 27 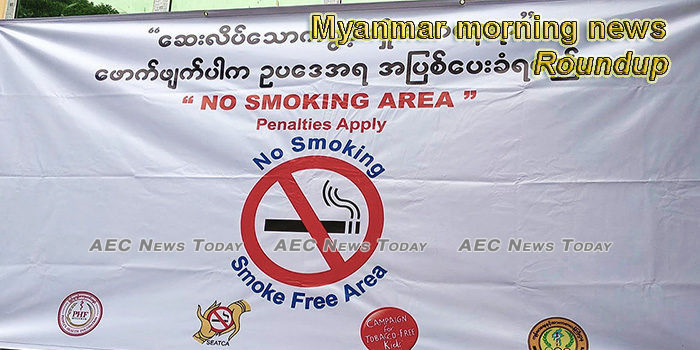 Myanmar to receive agriculture loan from World Bank
A senior government official has revealed that Myanmar will receive a loan of US$200 million (K277 billion) from the World Bank.
— Myanmar Times

Thitikorn closes in on Myanmar firm
SET-listed Thitikorn (TK) is set to finalise the acquisition of a microfinance business in Myanmar next quarter, a move expected to lend support to the company’s goal of having 30% of its loan portfolio come from neighbouring countries by year-end 2020.
— Bangkok Post

Joint fight against COVID-19 strengthens China-Myanmar bond
Xie Jian left Myanmar more than a month ago, but still gets messages from his peers in the Southeast Asian country asking about the prevention and control of COVID-19.
— ecns

Myanmar: Five Men Beaten On Tatmadaw Boat Face Terrorism Charges
Less than two weeks after video of five men being beaten by Tatmadaw soldiers went viral online, the victims of the “unlawful interrogations” appeared before the Sittwe District Court on May 22 and were arraigned on terrorism charges, lawyer U Kyaw Nyunt Maung told DMG.
— Eurasia Review

After Record Drug Bust, Questions of Opioid Crisis Creeping into Asia
The evergreen hills of northeast Myanmar’s section of the Golden Triangle are sparse, making it easy to hide out in the open a set of machines that look like squat robots, but are in fact pressure reactors that cook drug chemicals.
— VOA

Govt to survey pandemic’s effect on street children in Myanmar
The Ministry of Social Welfare, Relief and Resettlement will conduct an assessment of the conditions and needs of street children in Yangon and Mandalay next month, as it tries to halt the spread of COVID-19, a Department of Rehabilitation official said.
— Myanmar Times

Myanmar central bank confirms digital currency ban
The Central Bank of Myanmar (CBM) has outlawed the use of digital currencies in the country.
— The paypers

60 hotels, guesthouses seek to reopen in Mandalay
Sixty hotels and guest houses in Mandalay Region have applied to reopen and will be inspected starting next week, said U Min Naing, chair of the Myanmar Hotelier Association in Mandalay.
— Myanmar Times

Design faults blamed in Yangon building collapse
Design faults caused a portion of a building to collapse recently at the University of Nursing in Yangon, experts said on May 25.
— Myanmar Times

NLD, Tatmadaw in budget tit-for-tat
Legislators of the ruling National League for Democracy (NLD) and the Tatmadaw (military) argued over the allocation of additional money for defence during a discussion in parliament on May 25.
— Myanmar Times

No air quality dividend for Yangon amid COVID-19
Even as factories close and many people stay home, air pollution in Yangon has remained stubbornly bad, and the agriculture sector may hold the answer.
— Frontier Myanmar

Timeline: Myanmar’s Government Responses to the COVID-19 Pandemic
The Irrawaddy provides an overview of key events in the Myanmar government’s efforts to contain the spread of the coronavirus.
— Irrawaddy

Myanmar Submits First Report to World Court on Provisional Measures to Protect Rohingya
The ICJ said Myanmar had submitted its first report on steps to protect Rohingya, in compliance with a court order as part of Gambia’s genocide case against the country.
— Irrawaddy

Myanmar files first Rohingya case report to top UN court
Myanmar has submitted its first report to the International Court of Justice on steps it has taken to prevent the genocide of Rohingya Muslims, the UN’s top court said Tuesday morning (May 26).
— The Star Online

Developer issues tender for Ayeyarwady LNG power plant
The Myanmar-Chinese developers of a major liquefied natural gas (LNG) power plant for Ayeyarwady Region have issued a tender with a one-week deadline for companies to enter the prequalification stage.
— Myanmar Times

Myanmar Parliament Approves $700-Million IMF Loan for COVID-19 Spending
Parliament has approved an IMF loan package worth US$700 million to meet budget shortfalls as the government boosts spending to curb the economic impact of COVID-19.
— IrrawaddyS

Shan Pants, Burmese Longyi and Teenagers: Finding the Moral Imagination for Peace in Myanmar
Political structures, constitutions and peace processes cannot confer dignity or legitimacy; those things come from people’s attitudes toward, and trust in, one another.
— Irrawaddy

The Day Myanmar’s Capital Erupted Into Race Riots
On this day in 1930, violence between Myanmar and Indian workers over jobs at Yangon Port led to days of bloody clashes between the two communities across the country.
— Irrawaddy

Top officials who banned crowds from gathering blasted for gathering in crowd
Yangon’s regional government is under fire today after a top official and the chairman of its pandemic response team attended a Sunday religious festival in apparent defiance of their own rules.
— Coconuts Myanmar

The Missionary School That Educated Many of 20th-Century Myanmar’s Most Prominent Figures
Occupying its current site since 1886, the Yangon school once known as St. Paul High turned out many of the leading figures of the colonial and post-independence periods.
— Irrawaddy