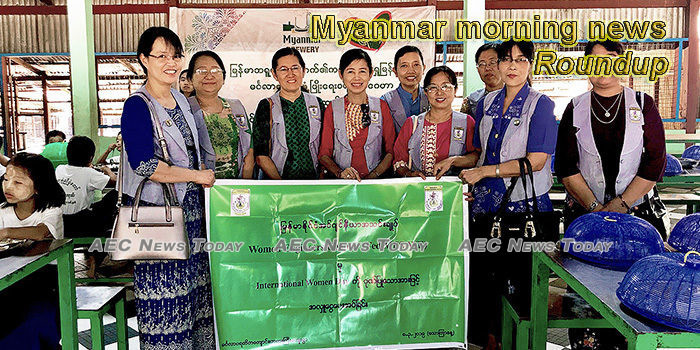 Power projects on track for completion, ministry says
To provide electricity before height of the dry season arrives in March, new power plants need to be completed on time, says Deputy Minister of Electricity and Energy U Khin Maung Win.
— Myanmar Times

Foreign insurers added more than $120M to industry in Myanmar
Investors have channeled some US$120 million and K60 billion into the Myanmar insurance sector since its liberalisation last year, according to the Myanmar Investment Commission (MIC).
— Myanmar Times

No, to cruise ship in Yangon
MYANMAR decided against allowing a tourist cruise ship, the Silver Spirit, to dock in Yangon with its passengers, days after agreeing to let them stopover for four days.
— New Straits times

UN appeals for US$877 million for Rohingya refugee response in Bangladesh
United Nations agencies and NGO partners today launched the 2020 Joint Response Plan (JRP) for the Rohingya humanitarian crisis. Building on the efforts and success of previous years, the appeal aims to raise US$877 million to respond to the needs of approximately 855,000 Rohingya refugees from Myanmar and over 444,000 vulnerable Bangladeshis in the communities generously hosting them.
— UNHCR

Myanmar Military Postpones Armed Forces Day Parade Over Coronavirus
The Myanmar military has postponed celebrations of the 75th anniversary of its anti-fascist struggle due to COVID-19 and the Health Ministry’s warning against large gatherings.
— Irrawaddy

National committee meets to promote PLWD inclusion in hotels, tourism sector
A coordination meeting at the Ministry of Social Welfare, Relief and Resettlement yesterday discussed promoting the inclusion of people living with disabilities (PLWD) in the hotels and travel sector.
— The Global New Light of Myanmar

Myanmar: New Project Aims to Improve Education Quality and Access Across Country
A project to improve access to, and quality of, basic education nationwide in Myanmar was approved today by the World Bank’s Board of Executive Directors. The project, financed by a US$100 million credit from the International Development Association (IDA), will be implemented over four school years.
— Reliefweb

No Positive Cases as Myanmar Tests For Coronavirus Amid Health System Concerns
Myanmar heath officials have tested at least 45 people for possible coronavirus infections since January, with none testing positive, according to health officials, amid growing concern that the Southeast Asian nation’s inadequate health system will not be able to effectively deal with an outbreak.
— Radio Free Asia

Two Chinese wanted for suitcase murder caught in Myanmar
Myanmar authorities have arrested two of four Chinese nationals wanted by Thai police for the murder of a compatriot whose body was found in a suitcase in the Ping River in Kamphaeng Phet province.
— Bangkok Post

To strengthen democracy, improve access for disabled
The hotels and tourism sector is one of the sectors driving socio-economic development in Myanmar.
— The Global New Light of Myanmar

Mandalay Court Collects US$227,000 for American’s Bail in Cannabis Plantation Case
A bondsman has paid a Mandalay court US$227,000 to cover the bail for a US citizen who failed to appear in court in an alleged marijuana plantation case.
— Irrawaddy

Myanmar’s Ruling Party Sacks Media-Friendly Spokesman
The NLD has sacked its respected spokesman, leaving one media representative who suffers from leukemia and is renowned for refusing to answer questions.
— Irrawaddy

Fighting Continues in Shan State Between Myanmar Military and RCSS
Fighting in Mong Kai and Keysi, Shan State has continued despite the ethnic armed group’s efforts to deescalate the situation.
— Irrawaddy

Food safety workshop held in Yangon
A workshop on developing effective strategies for safety of food sold inside and outside the markets was held in Yangon on 2 March. Union Minister for Health and Sports Dr Myint Htwe delivered a speech at the opening ceremony of workshop at Lottee Hotel. In his speech, the Union Minister highlighted the dangers of banned …
— The Global New Light of Myanmar

Wa Army Says It’s Willing to Work With Myanmar Govt to Hold Voting in Its Territory
Wa leaders have promised to arrange voting on their territory during this year’s general election, and have invited the State Counselor to visit their capital, Panghsang.
— Irrawaddy

Myanmar Will Benefit From Deeper Ties With India
As China’s influence grows, Myanmar would do well to seek stronger contributions from India to the country’s development, democratic transition and military capacity.
— Irrawaddy

APG accuses Myanmar of weakness in combating money laundering
The Asia Pacific Group on Money Laundering (APG) has accused Myanmar of being slow to combat money laundering and financing terrorism, U Soe Win, Union Minister of Planning, Finance and Industry, said during the 32nd meeting between Vice President U Myint Swe and the business community in late February.
— Myanmar Times

COVID-19 rains on Tatmadaw diamond jubilee parade
The Tatmadaw (military) has postponed a parade to mark its 75th anniversary on March 27 due to concerns about the COVID-19 epidemic.
— Myanmar Times

Facebook claims Myanmar telco spent $1.2m on fake accounts to criticise competitors
Facebook published its first Coordinated Inauthentic Behavior Report on Monday, in which the company claimed that they had moved a network of fake pages and accounts allegedly operated by Vietnam’s Viettel and Myanmar’s Mytel.
— Oodaloop

Gov’t faces hydropower project delays due to COVID-19
Due to the COVID-19 outbreak, factories have shut down in China and Chinese experts have stopped coming, causing delays to hydropower projects, according to the Ministry of Electricity and Energy.
— Eleven Myanmar

Police Arrest Chinese Suspects at Myanmar Beach over Thailand Murder
Two of four Chinese suspects wanted for a murder in Thailand have been arrested at an Ayeyarwady Region beach resort, according to Myanmar’s police.
— Irrawaddy

Myanmar morning news for May 1