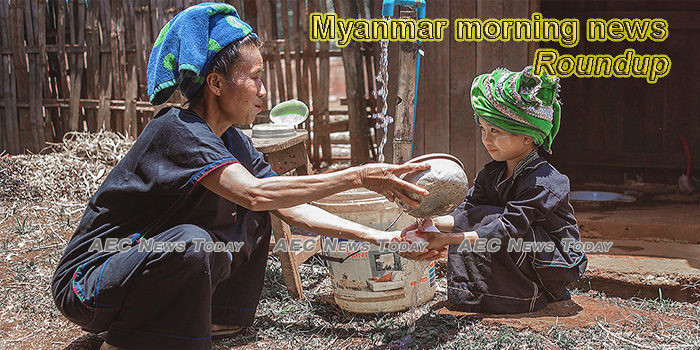 Myanmar workers seek up to K15,000 minimum wage
Workers’ groups have presented surveys to support their claim that the daily minimum wage should range between K6000 (US$4.33) and K15,000.
— Myanmar Times

Workers cast doubt on reason for factory shutdown in Yangon
Workers expressed doubt that a Chinese-owned factory in Yangon where they work needed to shut down due to a lack of raw materials.
— Myanmar Times

AA mine-blasts a bridge in Buthidaung: army
Arakan Army (AA) is attacked at a bridge on Nyaungchaung-Sataepyin Road in Buthidaung Township with mines in the early morning of March 15, announced the army on March 15.
— Eleven Myanmar

Major cinema groups suspended operations over COVID-19
Following the announcements on COVID-19 update, celebrations and crowded events are prohibited around the world. Although there has not been a confirmed outbreak of the virus in Myanmar, certain events and celebrations have been cancelled such as Thingyan Water Festival and now, the operation of cinemas has been suspended nationwide.
— Myanmore

Tide turns for sustainable tourism in a Myanmar backwater
A tiny Burmese hamlet of rickety wooden stilt-houses looking out across a broad estuary to neighbouring Thailand is the test-site for a new responsible tourism project which aims to better lives, conserve neglected habitats, and provide adventurous visitors with an authentic non-touristy experience.
— TTR Weekly

40,000 tonnes of rice exported via Muse
Rice and broken rice totalling around 40,000 tonnes were exported through Muse 105 Mile in a month due to demand from the Chinese market, according to Muse 105 mile trading zone.
— Myanmar Times

The Myanmar Govt Has Been Spared a Real Test on Coronavirus–but No One’s Luck Lasts Forever
The government has been slow to act on coronavirus, on both the health and economic fronts; so far only luck has spared it a real test of its crisis-management skills.
— Irrawaddy

Myanmar Migrants in Thailand Discouraged From New Year Homecoming Amid Covid-19 Concerns
The Myanmar Embassy in Thailand tells migrants not to travel home for water festival celebrations in April. Anyone who ignores the advice faces 14 days in quarantine.
— Irrawaddy

Myanmar Orders Quarantine, Monitoring for Arrivals from Countries Hit by Coronavirus
A mandatory quarantine is in effect for anyone who has been in Korea, Italy, Iran, France, Spain or Germany, and arrivals from China and the US will be monitored.
— Irrawaddy

State Counsellor’s televised message to public on prevention, control and treatment measures against COVID-19
People are the key; No matter how the government adopts sound policies, public participation is pivotal to achieve success.
— The Global New Light of Myanmar

Myanmar Military Case Against Irrawaddy Editor to Move Ahead
A Yangon court has accepted a military lawsuit filed against U Ye Ni over the media outlet’s coverage of clashes in Rakhine State.
— Irrawaddy

Category (1) proposals to amend Constitution not passed
Twenty-four MPs were on leave at the 23rd-day meeting of the Second Pyidaungsu Hluttaw’s 15th regular session yesterday and the remaining 630 attended.
— The Global New Light of Myanmar

Over 100 cinemas shut down in fear of COVID-19
In the wake of COVID-19 shock, more than 100 cinemas across the country have been temporarily closed for a short period from 16 March to 30 April, according to the public relations team of Thamada Cinema in Yangon.
— The Global New Light of Myanmar

UEC holds preparatory meeting for 2020 General Election
Union Election Commission met with its sub-commissions from regions, states, and Union council area yesterday to discuss preparations for successful holding of the 2020 General Election as it has completed the voter-lists compilation process in 2019.
— The Global New Light of Myanmar

Police seize 1,810 stimulant tablets in Mandalay
On 13 March, police intercepted the motorcycle at the toll gate near Naelaethit Village in Myingyan Township, Mandalay Region; 1,810 stimulant tablets, K 202,500 in cash, and a mobile phone in her purse were confiscated from the suspect, state media reported.
— Mizzima

Video on-demand service dodges claims of unpaid bills
Malaysia-based iflix insists it has not lowered the curtain on its operations in Myanmar, despite closing its office last October and allegedly owing money to the prominent actress it recruited as brand ambassador.
— Frontier Myanmar

2 govt wings discouraging onion import to protect local farmers
With Indian onion starting to reenter Bangladesh after a six-month export ban, two government wings are up for discouraging the arrival of the tuber to protect local growers from price slumps amidst ongoing harvests.
— The daily star

Govt warns manufacturers: Time is up on Myanmar labelling rule
The Department of Consumer Affairs warned manufacturers of legal action if they do not label their products in the Myanmar language.
— Myanmar Times

Myanmar Preschools Braced for Coronavirus Closures
Although there are no confirmed coronavirus cases in Myanmar, all nursery schools are likely to be forced to close until late April as a precaution.
— Irrawaddy

With Failed Myanmar Charter Reform, Military Still Controls Amnesty for Political Prisoners
Parliament rejected a proposed constitutional amendment on Monday that would have revoked the military’s power to control the presidential amnesty process in Myanmar.
— Irrawaddy

Two Women Injured by Myanmar Military in Rakhine Die in Hospital
Two women died at a hospital in Rakhine State after being hit on Friday by fire from Myanmar military forces.
— Irrawaddy