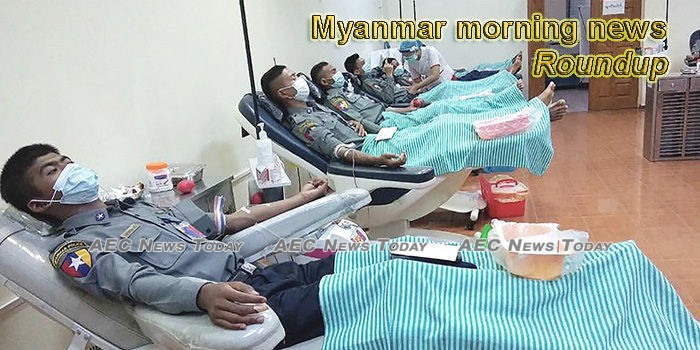 UN Supplies Over 75,000 Test Kits to Government of Myanmar in Fight Against COVID-19
The United Nations agencies, funds and programmes are continuing to provide strong support to the Government of Myanmar’s efforts to prepare and respond to the COVID-19 pandemic.
— Reliefweb

Satirical Troupe Face Extra Prison Terms for Ridiculing Myanmar’s Military
Many of the Peacock Generation troupe are already in jail for ridiculing the military last year. They now face further charges in each township where they performed.
— Irrawaddy

Petronas grabs first mover advantage in Myanmar’s LNG market
Malaysia’s Petronas has delivered Myanmar’s first ever LNG cargoes. This marks the emergence of a new consumer for the fuel in the Asia region.
— Energy Voice

Myanmar Pulls Swiss Firm to Scrutinize China’s BRI Project
The Myanmar government is working with a Swiss company to evaluate a Chinese study of the planned Muse-Mandalay Railway, part of Beijing’s Belt and Road Initiative.
— Irrawaddy

India-Myanmar vow to deepen trade, expand business and step-up border cooperation post COVID-19
India-Myanmar relations are rooted in shared historical, ethnic, cultural, and religious ties that have turned into a multi-folded trade and business partnership that helps in the economic growth of both the nation.
— Mizzima

Calling out a fabricated interview by Frontier Myanmar
In its June 5 edition, Frontier Myanmar published a story – “Desperate times for independent media as COVID-19 savages a fragile industry”.
— Myanmar Times

41 Myanmar migrant workers return home via Kawthoung border on 10 June
A total of 41 Myanmar nationals–20 males and 21 females– arrived back home through Kawthoung border from Ranong of Thailand on 10 June afternoon, making the total number 830 on this route.
— The Global New Light of Myanmar

Supplies reach IDP camps, safe shelters for measures against COVID-19
The Ministry of Social Welfare, Relief and Resettlement is providing medical and relief items to the IDP camps and safe shelters in Shan, Chin and Rakhine states for prevention of COVID-19 transmission.
— The Global New Light of Myanmar

AA Accused of Stabbing Myanmar Officer and Seizing Soldier in Rakhine State
Myanmar’s military is claiming that an army officer in plainclothes was stabbed and a private soldier was abducted by the Arakan Army in Rakhine State.
— Irrawaddy

Myanmar IDP Killed While Fetching Rice in Chin State
A displaced man in Paletwa, Chin State was shot and killed while walking to get rice from a nearby village in an area rocked by fighting between the military and the Arakan Army.
— Irrawaddy

Villagers Killed and Wounded By Myanmar Military Shelling After Alleged Bazooka Attack
A civilian was killed and other villagers wounded near Sittwe after naval vessels fired in response to an alleged RPG attack by the Arakan Army.
— Irrawaddy

Malaysia says Rohingya boat tried to enter its waters
A boat carrying hundreds of Rohingya tried to land in Malaysia this week but turned back after spotting patrol vessels seeking to stop the entry of migrants over COVID-19 fears, an official said on Thursday (Jun 11).
— CNA

Myanmar morning news for May 6