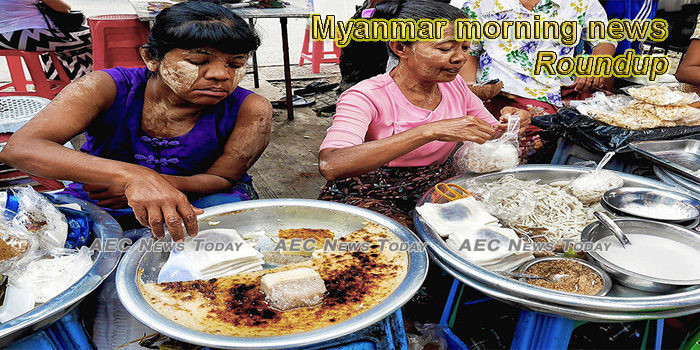 Myanmar-China border trade exceeds a billion dollars in one month
During one month of this fiscal year, the total trade value between Myanmar and China exceeded one billion US dollars with China’s imports reaching nearly 550 million US dollars, according to the Commerce Ministry.
— Eleven Myanmar

Myanmar leads ASEAN on child rights and protection
Myanmar is the leading country in Southeast Asia in eliminating corporal punishment and child labour following the ratification of a minimum age obligation and passsage of a landmark legislation.
— Myanmar Times

Strained Myanmar-Bangladesh Security Ties in Focus With Border Conference
The engagement spotlighted ongoing efforts by both countries to continue to manage a contentious aspect of their relations.
— The Diplomat

Myanmar’s economy to shine in 2020?
It was reported recently that the ASEAN +3 Macroeconomic Research Office (AMRO) had given Myanmar’s economy a positive outlook for the fiscal year of 2019 to 2020, expecting it to expand by 7.1 percent up from 6.8 percent in the previous fiscal year.
— The Asean Post

Traders see little change to fuel prices in the short term
Oil prices have spiked by more than 6 percent since the US killed top Iranian military commander Qasem Soleimani in a drone strike ordered by President Donald Trump on January 3.
— Myanmar Times

Why is most of Asia looking away from Myanmar?
The latest resolution passed by the United Nations General Assembly condemning rights abuses against Rohingya Muslims and other minority groups in Myanmar was the third on the subject.
— Khmer Times

Blast kills 4 children in Myanmar’s Rakhine
Four children were killed and five injured alongside their teacher as an explosion hit while they collected firewood in an area of Myanmar’s Rakhine state beset by fighting between the military and Arakan Army (AA) rebels.
— Mizzima

Blocking Access to Spending Report May Violate Myanmar Graft Law, Watchdog Warns Yangon Govt
An independent watchdog monitoring the Yangon government’s performance has warned that the regional administration’s ban on distributing the auditor-general’s report to lawmakers for parliamentary debate could lead to violations of the country’s anti-corruption law.
— Irrawaddy

At Myanmar Peace Talks, State Counselor Urges All Parties to Put Country First
At the long-awaited resumption of the Joint Implementation Coordination Meeting, Daw Aung San Suu Kyi urges all parties to the peace talks to look beyond their own goals.
— Irrawaddy

Myanmar authorities worry over fake news in social media
For months now stories have been circulating in social media about alleged abductions of children and a drug that can knock out a person unconscious with a touch on his or her skin.
— Myanmar Times

Court fines labour activist in Mandalay for illegal assembly
A township court on Tuesday imposed a K10,000 (US$7 dollars) fine against a labour leader for staging illegal protest over a year ago.
— Myanmar Times

Suu Kyi invokes iconic father to solidify support before election
Aung San Suu Kyi, the de facto leader of Myanmar, is calling upon the image of her celebrated father to reinforce her political support as she faces bubbling criticism of economic and domestic policies ahead of general elections in November.
— Nikkei Asian Review (paywall)

Aung San’s Image Now On Myanmar Banknotes
New banknotes bearing the image of independence hero Aung San went on release in Myanmar, on Tuesday, and long lines formed outside bank branches as customers queued to get them.
— Republic World

Why Myanmar Should Matter to India
Myanmar is only country that sits at the intersection of India’s “Neighborhood First” policy and “Act East” policy.
— The Diplomat

Growth in Myanmar forecast to remain flat in 2020, says research company
The Myanmar economy is forecast to remain at 6.5 percent in fiscal 2019-20, with four factors foreseen to limit the country’s potential, according to a recent analysis by a British research firm.
— Myanmar Times

Country’s competition commission begins to find its footing
The Myanmar Competition Commission will focus on looking into allegations of unfair competition in the market following formal reports of complaints, says U Ko Ko Lay, the secretary of the commission.
— Myanmar Times

Myanmar’s Ex-President Tells Voters to Protect Race, Religion, Military in 2020 Election
Myanmar’s former president U Thein Sein has warned that the country is facing growing threats to territory, race and religion and called on citizens to vote for candidates who will protect the country in the upcoming general election.
— Irrawaddy

KBZPay launches short-term loan for agents
The KBZPay Quick Access Loan will help agents and merchants improve their cash flows, as many face issues in facilitating peer-to-peer cash transactions. The growing volume of cash transfers requires the agents to have sufficient funds in their mobile wallets to avoid cash flow problems.
— Myanmar Times

Myanmar Freedom of Expression Advocates Call on Military to Stop Suing Critics
Freedom of expression advocates at Athan have demanded that Myanmar’s military drop all lawsuits against critics and respect media rights.
— Irrawaddy

The Day Myanmar’s Oil Workers Downed Tools
On this day 82 years ago, oil workers in Chauk in Magwe Region came out on strike for better pay and working conditions. The strike spread into the largest and longest-running national uprising during the colonial period.
— Irrawaddy

Myanmar’s Cardinal Bo weighs in on Hong Kong turmoil
Myanmar’s Catholic leader and a Bago regional MP joined politicians and civic leaders from 19 countries to call on the Hong Kong government to set up an independent enquiry into alleged police brutality during the crackdown against protesters.
— Myanmar Times

Bangladesh Border Chief Demands Rohingya Return to Myanmar
Bangladesh’s border chief has told a police delegation from Myanmar that instability and crime will grow while 1.1 million Rohingya refugees remain near the border.
— Irrawaddy

‘Have Fun in Burma’: A Fictional Exploration of Intercultural Misunderstanding
As international scrutiny of Myanmar mounts, Rosalie Metro’s novel offers perspective on how the values Westerners carry often undermine their well-intentioned efforts.
— Irrawaddy

Myeik Archipelago’s potential for sustainable tourism
Taninthayi Region where the Myeik, or Margui, Archipelago is located has prospects for the development of tourism.
— The Global New Light of Myanmar