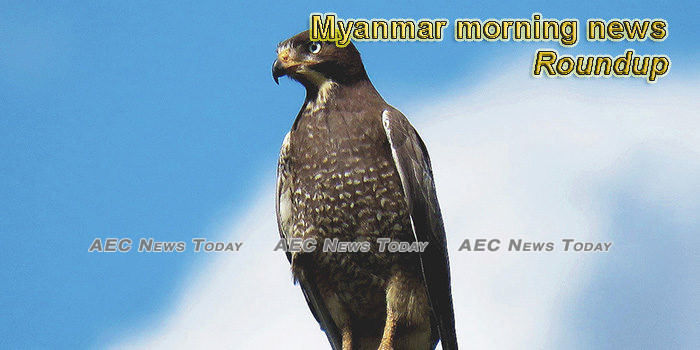 Sixty Myanmar Students to Be Evacuated From China as Coronavirus Spreads
The Myanmar Embassy in Beijing plans to evacuate 60 students from the Wuhan area by bus and plane as the coronavirus death toll rises to 80.
— Irrawaddy

Number of IDPs exceeds 106,000 in Rakhine: REC
The number of IDPs that fled their homes due to ongoing fights in Rakhine State has reached over 106,000, according to the Rakhine Ethnic Congress (REC).
— Eleven Myanmar

World Bank’s Myanmar Economic Monitor – Resilience amidst risks
The bi-annual report from the World Bank, Myanmar Economic Monitor (MEM), covering the period July-Dec 2019, was released on the 15th Jan 2020 highlights elements of resilience in the economy and also the vulnerabilities that need to be addressed in the face of global slowdown and domestic uncertainties.
— BNI Online

EU asks Myanmar to act on Rakhine war crimes
The European Union called on the Myanmar government on Monday to act on the report by a government-established international panel that found war crimes and grave human rights abuses had been committed in Rakhine State in 2017.
— Myanmar Times

Local fuel prices continue to fall
Local fuel prices have continued to go down falling by Ks55-70 per liter over the past two weeks as global oil prices decrease to US$55 per barrel, according to local filling stations.
— Eleven Myanmar

Status of license verification for printing, publishing, news agencies
The Ministry of Information had received approval from the Union government and announced the Printing and Publishing Enterprise Bylaw with Notification No. 48/2014 on 10 October 2014.
— The Global New Light of Myanmar

Myanmar aviation sector expected to become profitable, but more pain ahead first
Myanmar’s aviation industry is betting on a more profitable future with the number of airlines now reduced to half compared to 2017 and demand for domestic air travel expected to catch up with supply.
— Myanmar Times

Myanmar ex-president comes out of retirement to help USDP
Former Myanmar president U Thein Sein – who jump-started political and economic reforms in the country during his administration – will actively campaign for the main opposition United Solidarity and Development Party (USDP).
— Myanmar Times

Mon State a sweet spot for maritime trade, tourism: Picon-Deed
Maritime trade and tourism in Mon State can level up with better transport and power supply, according to a property market report.
— Myanmar Times

Ex-Myanmar President U Thein Sein to Campaign for USDP Ahead of This Year’s Election
Former Union president and current USDP chairman U Thein Sein will campaign for the opposition party ahead of this year’s election, a party spokesman said.
— Irrawaddy

Refugee writers dial into Myanmar poetry slam
Divided by hatred but united over the written word, Rohingya Muslim poets in Bangladeshi refugee camps joined Buddhist bards in Myanmar by video link as part of a ground-breaking poetry festival in a country reeling from genocide allegations.
— Mizzima

Travellers arriving in Myanmar from China must fill a health form at airport
Ministry of Health and Sports, Central Epidemiology Unit, Deputy Director Dr. Khin Khin Gyi said that travellers coming from China would be allowed to enter Myanmar only after filling up a “Health Card” at entry ports of Myanmar.
— BNI Online

Charter Amendment Committee Submits Two Bills to Myanmar Parliament Calling for Reduced Role for Military
The bills are backed by more than half of all lawmakers, except military MPs and their allies. The men in uniform complain the drafts don’t represent their views.
— Irrawaddy

620 km long human chain comprising 70 lakh people formed in Kerala in protest against CAA
Kerala Chief Minister Pinarayi Vijayan was also standing in the chain along with his family members at Palyam in Thiruvananthapuram.
— Eleven Myanmar

Rohingya Women Killed by Artillery Shell in Myanmar’s Rakhine
The Arakan Army and Myanmar’s military blame each other for an artillery shell that killed two young women when it landed in a village in northern Rakhine.
— Irrawaddy

Workshop in Ngapali focuses on strategy for improving tourism
The workshop on ‘Comprehensive Strategy for a Responsible and Sustainable Tourism Development for Rakhine State 2020-2030’ was held at Amazing Ngapali Resort in Thandwe District from 25 to 26 January, 2020.
— The Global New Light of Myanmar

Maritime trade up $1 bln current fiscal year
The value of Myanmar’s maritime trade for the period between 1 October and 17 January in the 2019-2020 financial year totaled US$8 billion, an increase of over $1 billion compared to the year-ago period, according to the Ministry of Commerce.
— The Global New Light of Myanmar

Rakhine Court Releases Civilians Held for 11 Months for ‘Ties to AA’
The Sittwe Township Court has ruled that 13 civilians detained since last February were ‘wrongfully charged’ after the military alleged they had ties to the Arakan Army.
— Irrawaddy

Amyotha Hluttaw holds first day meeting of 15th regular session
The Second Amyotha Hluttaw convened its 1st day meeting of 15th regular session yesterday, with an opening speech of Speaker Mahn Win Khaing Than, urging the MPs to perform the works of respective committees in line with laws, bylaws and regulations and the requirements of checks and balances on administrative and legislative estates, in addition.
— The Global New Light of Myanmar

Thai camera crew films segments of ‘Around the World’ in Myanmar
Film crew from Thai TV series ‘Around the World’ filmed ongoing renovation projects of historic buildings around Sule Pagoda and on Pansodan Road in downtown Yangon yesterday.
— The Global New Light of Myanmar

NLD Dismisses Outspoken MP for Hurting Party’s Image
The National League for Democracy has revoked the party membership of a Yangon lawmaker who has been critical of the regional government’s policies and performance.
— Irrawaddy

Wa shut down nightclubs to prevent entry of coronavirus
The United Wa State Army (UWSA) on Sunday said it is shutting down the entertainment centres in its autonomous territory, which borders China, as part of its effort to prevent the spread of the coronavirus.
— Myanmar Times

Why the ICJ Is Trying to Protect Myanmar’s Rohingya
The International Court of Justice issued an important decision aimed at protecting Myanmar’s persecuted Rohingya minority, but its impact is unclear.
— Reliefweb

Time to recentre power to northern Shan State’s first responders
Local responses to crises can be more effective, relevant and timely than those by external actors, as powerfully demonstrated during the fighting that erupted in northern Shan State last August.
— Frontier Myanmar

After Four Years in a British Prison in Uganda, Myanmar’s ex-Premier Came Home
On this day in 1946, U Saw, leader of British Burma, came home after spending World War II in a British prison in Uganda for saying he would support Japan if it invaded Burma.
— Irrawaddy

Confessions of Two Military Men Illustrate the Myth of ‘One Voice’
The memoirs of two senior figures in Myanmar’s ex-military government shed light on the junta’s machinations, and expose the cracks in the monolithic image it projected.
— Irrawaddy