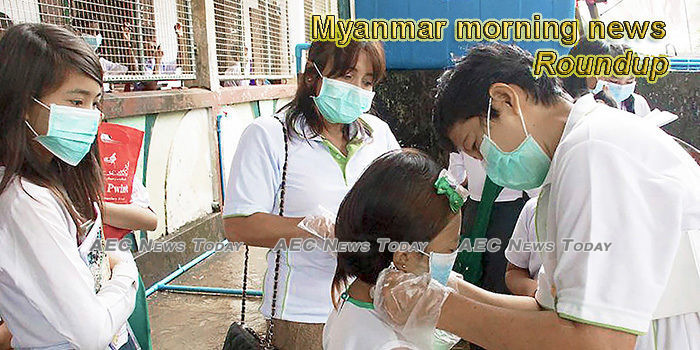 Myanmar Evacuates 59 Students From Virus-Hit Wuhan, China
All but four of the 63 Myanmar students who had been stranded in Wuhan, the center of the coronavirus outbreak, were evacuated on Sunday and are in quarantine in Mandalay.
— Irrawaddy

Myanmar could be India’s gateway to Southeast Asia
On January 17 and 18, China’s President Xi Jinping visited Myanmar, the first visit by a Chinese president to Myanmar in 19 years.
— Asean Today

Myanmar among 6 nations face ban
US President Donald Trump on Friday slapped immigration restrictions on citizens of six countries including Nigeria, in addition to the list of nations already targeted by his controversial travel ban.
— The Independent

Myanmar Turns Back China Southern Flight Over Coronavirus Fears: Government Spokesman
Authorities in Myanmar turned back a China Southern flight from Guangzhou with almost everyone on board on Friday after one of the passengers was found with flu symptoms similar to the fast-spreading coronavirus, a government spokesman said.
— New York Times

FDI up $800 mln against previous fiscal
By Nyein Nyein Myanmar attracted more than US$2 billion in foreign direct investments in the current fiscal year, an increase of $800 million compared with the corresponding period of the previous FY, said U Thant Sin Lwin, Director-General of the Directorate of Investment and Company Administration (DICA).
— The Global New Light of Myanmar

Myanmar receives over 4mil foreign tourists in 2019
YANGON: Myanmar received over 4.36 million foreign visitors in 2019, said the Ministry of Hotels and Tourism has announced.
— The Star Online

Myanmar’s border trade reaches $3.3 bln this FY
The value of border trade, as of 24 January, 2020, has reached over US$ 3.28 billion, exceeding $596 million compared to the same period last year, according to the Ministry of Commerce.
— The Global New Light of Myanmar

Transport infrastructure upgrades take shape in Chin State
By Kyaw Htike Soe Located in western Myanmar along the border with India and Bangladesh, Chin State is a mountainous region with few transportation links and remains one of the least developed areas of the country.
— The Global New Light of Myanmar

Myanmar military accused of continued human right violations by Amnesty
Myanmar’s military has continued to carry out serious human rights violations in 2019, while the government made no progress addressing the pervasive impunity of soldiers who committed abuses, London-based Amnesty International alleged Thursday in a new report on repression in Asia, according to an RFA report.
— BNI Online

National Rotavirus immunization programme calls all hands on deck
The Ministry of Health and Sports launched a Rotavirus vaccination campaign with its National Immunization Programme yesterday.
— The Global New Light of Myanmar

China coronavirus: Watermelon, muskmelon exports plunge, prices drop by half
By Nyein Nyein On account of the coronavirus outbreak, exports of watermelons and muskmelons to China have dropped, leading to prices plunging by half, said U Naing Win, chair of the Myanmar Watermelon and Muskmelon Producers and Exporters Association.
— The Global New Light of Myanmar

Myanmar-India border trade slides to $46 mln
The value of border trade between Myanmar and India reached US$46.97 million as of 24 January in the 2019-2020 fiscal year, a decline of $13.43 million from $60.4 million recorded in the year-ago period, according to statistics provided by the Ministry of Commerce.
— The Global New Light of Myanmar

International law in spotlight following Myanmar genocide verdict
The Rohingya, who have been described by the UN as the most persecuted minority in the world, experienced a glimmer of hope last week, when the International Court of Justice (ICJ) delivered a remarkable ruling that those members of the community remaining in Myanmar currently face a credible threat of genocide.
— Arab News