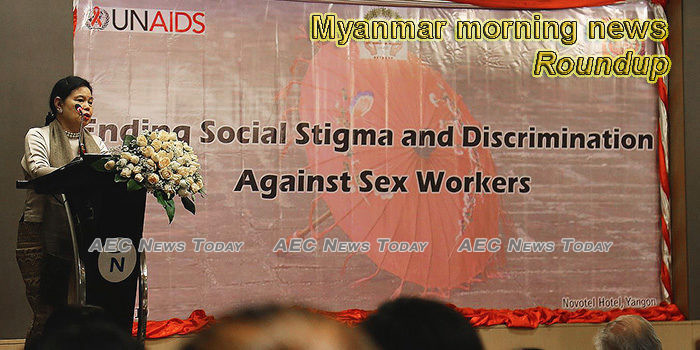 Virus outbreak could impact Myanmar garment factories by March
The Myanmar Garment Manufacturers Association (MGMA) says it fears that half the garment factories in the country may have to shut down temporarily as soon as March, due to a shortage of raw materials from China.
— Myanmar Times

Myanmar Police Charge Nine Students for Protesting Against Internet Ban in Conflict Zone
Authorities in Myanmar Monday billed 9 college students with breaching the nation’s Peaceable Meeting Regulation after they offered an objection Sunday in opposition to the federal authorities’s suspension of web options in restive Rakhine in addition to Chin states, residence to combating in between ethnic insurgents in addition to Myanmar’s armed power.
— Scoop Zone 24

Myanmar Court Issues Arrest Warrant for US Citizen in Alleged Marijuana Farming Case
A US citizen on trial for running an alleged marijuana farm in Mandalay has gone missing and a court has issued a warrant for his arrest after he failed to appear in court.
— Irrawaddy

A clouded future for e-cigarettes in Myanmar
The law is vague on the status of vaping in Myanmar, and the Ministry of Health and Sports may ban e-cigarettes before changes can be made to the relevant legislation.
— Frontier Myanmar

Sino-Indian Competition in Myanmar in the Spotlight With Indian Navy Chief Visit
Myanmar remains hugely important for India. The naval visit last week again focused attention on the role of India and China in the Southeast Asian state, even though New Delhi’s weakness lies more in non-security realms.
— The Diplomat

More Myanmar workers returning to their jobs despite virus threat
Myanmar workers are going back to China in recent days as factories located the border between two countries reopen with some shops and trade activities become active again although the regions hard hit by the coronavirus remain closed.
— Eleven Myanmar

Bill seeks to control news of outbreaks in Myanmar
At a time when the world anxiously monitors every update on COVID-19, a bill on dealing with infectious diseases has surfaced in Myanmar containing a provision to restrict reporting on the outbreak.
— Myanmar Times

New age rebels winning the fight in Myanmar
As Myanmar’s government sues for peace, its autonomous military, the Tatmadaw, faces a new type of insurgency it seems increasingly ill-prepared to counter and combat.
— Asia times

Direct Flights Between Myanmar and Buddha’s Birthplace in Nepal to Begin in May
To boost tourism with Myanmar, Nepal has announced that direct charter flights connecting Lumbini with Mandalay and Yangon will begin in May. The move is part of the “Visit Nepal 2020” campaign to boost tourism to the Himalayan country.
— Irrawaddy

Illegal goods seizures rise in 3 months
As part of effort for prevention and control of illegal trade, Myanmar was able to seize the contraband goods worth over Ks15 billion from September 2018 to October 2019, but the value of seizures of illegal goods since then till January 2020 reached over Ks9 billion bringing the total value to over Ks24 billion, said Vice President Myint Swe.
— Eleven Myanmar

Myanmar youth who evaded screening at Yangon airport after return from S Korea does not have virus
Deputy Director of Central Epidemiology Unit, Dr. Khin Khin Gyi, said that they sent a Korea returnee Myanmar national passenger, who took the airport-Sule shuttle bus at Yangon airport after arrival from Korea, to Waibargi infectious diseases hospital for screening but he was not found to have the coronavirus.
— Mizzima

Yangon’s best serviced apartments
The number of foreign investors and visitors to the country has been increasing over the past decade. Though many choose to stay in hotels or rent houses and apartments, those on a medium-term stay may prefer a different option.
— Myanmar Times

Laying down of public policies is of vital importance for service personnel
A Public Policy and Basic Social Research Methodology Training was conducted at the Assembly Hall of the Ministry of Information in Nay Pyi Taw yesterday morning.
— The Global New Light of Myanmar

Myanmar Police Probe Boss over Child Employee Burns
A 13-year boy was allegedly doused in fuel and set on fire by his boss, who accused him of stealing from the till, according to a children’s rights group.
— Irrawaddy

Direct Flights Between Myanmar and Buddha’s Birthplace in Nepal to Begin in May
Charter flights will begin carrying Buddhist pilgrims directly to Lumbini, Nepal in two months; scheduled flights are expected to follow.
— Irrawaddy

Survey records 79 Ayeyawady dolphins
A survey conducted from 10 to 20 February in the Ayeyawady River between Mandalay and Bhamo has put the population of Ayeyawady dolphins at 79, a record increase that points to the success of conservation efforts, said U Han Win, officer in-charge of Ayeyawady Dolphin Conservation as well as deputy head of the Fisheries Department.
— The Global New Light of Myanmar

Workshop on air pollution, acid deposition in progress in Nay Pyi Taw
The Meteorology and Hydrology Department and the Acid Deposition Monitoring Network in East Asia (EANET) are jointly organizing a two-day workshop titled ‘National Awareness Workshop on Acid Deposition and Other Related Atmospheric Pollutions’, at the Hotel Royal Aster in Nay Pyi Taw.
— The Global New Light of Myanmar

38 Lisu families relocated in Kachin State
Thirty eight Lisu households displaced by fighting in Kachin State were relocated on February 22 near the town of Sadone after Ks300 million had been spent.
— Eleven Myanmar

Military Proxy USDP Adds Leaders Ahead of Myanmar’s Election
The Union Solidarity and Development Party has appointed two new vice-chairs and three new executive committee members in a bid to ramp up preparations for the election.
— Irrawaddy

Hluttaw holds conference to share experiences in peace building processes
A conference titled ‘The Role of Parliament in Peace Building Processes’ was opened at the Hluttaw Building in Nay Pyi Taw yesterday afternoon, with the aims to exchange views of well-experienced international parliamentarians, Myanmar Hluttaw representatives and stakeholders in peace building processes.
— The Global New Light of Myanmar

Survey Finds Decade-High Numbers of Irrawaddy Dolphins
Despite a decade-high number, there are challenges like electro-fishing, poor water quality and food supplies for the Irrawaddy dolphin.
— Irrawaddy