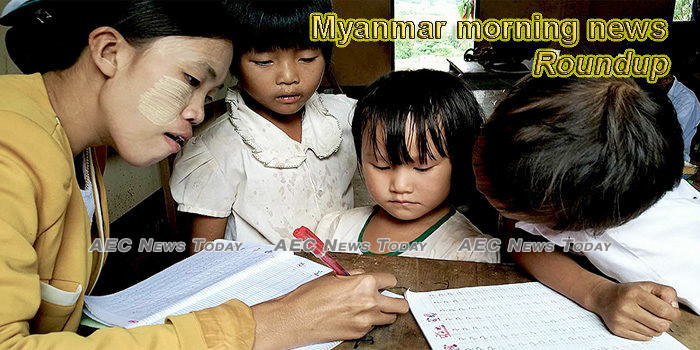 Myanmar students evacuated from SARS-CoV-2 hot zone go home (video)
Myanmar Minister for Health and Sports, Dr Myint Htwe, yesterday (Feb 16) met with the 59 Burmese students and officials repatriated from the coronavirus hot zone of Wuhan as they completed their 14-day quarantine and prepared to return to their homes.
— AEC News Today

China’s CITIC to build Myanmar’s huge Kyaukphyu Deep Seaport, first phase to cost US$1.3 bln
The planned multi-billion dollar Kyaukphyu Deep Seaport project will be developed with the contribution of 70 per cent by the China International Trust and Investment Corporation Consortium (CITIC) and 30 per cent by Myanmar, said Deputy Commerce Minister U Aung Htoo on Feb 16.
— The Star Online

Myanmar seaman drowns in Taiwan sea accident
A Myanmar seaman fell from an oil tanker and died on the spot on the weekend in southern Taiwan, the Taiwan Coast Guard said on Monday.
— Myanmar Times

China not protecting Myanmar, says envoy
Chinese Ambassador to Bangladesh Li Jiming yesterday said his country is not trying to protect Myanmar over the Rohingya issues as his country has friendly relations with both Bangladesh and Myanmar.
— The Independent BD

6.6kg of heroin, stimulants seized in Northern Myanmar
Myanmar authorities have seized a large haul of narcotic drugs including 6.6 kg of heroin and 89,300 stimulant tablets in Sagaing region, according to a release from the Central Committee for Drug Abuse Control (CCDAC) on Sunday.
— The Star Online

Survey shows inequality a serious problem in Myanmar
Inequality across different sections of people in terms of their wealth and incomes, and their initial resource endowments like education, nutrition, health, and even their collective political power are becoming central to the development policy discourse in recent years.
— BNI Online

Myanmar govt seeks resumption of ceasefire meeting in March
The Myanmar government on Sunday proposed the resumption of the regular truce monitoring meeting with the ethnic armed groups that have signed the Nationwide Ceasefire Agreement (NCA).
— Myanmar Times

Gas production and distribution inspected in Rakhine State
Union Minister U Win Khaing of the Ministry of Electricity and Energy, together with Rakhine State Chief Minister U Nyi Pu and state government’s Electricity, Industries and Transportation Minister U Aung Kyaw Zan, inspected the test drill Mahar (1) that is located at the Block A-3 of Myanmar west offshore.
— The Global New Light of Myanmar

Virus outbreak causes layoffs at Chinese-owned factory in Yangon
A Chinese-owned garment factory in Hlaing Tharyar township in Yangon Region has temporarily shut down and laid off hundreds of workers due to the COVID-19 outbreak.
— Myanmar Times

Myanmar-China Border gates see arrivals of more migrant workers
Myanmar migrant workers continue to return home due to the shutdown of plants and factories in Ruili and Kyalkhaung on China-Myanmar border in the wake of the coronavirus outbreak in China.
— Eleven Myanmar

Ethnicity, Security, Connectivity key to Indo-Myanmar borderlands – Book Review
Eleven articles by scholars and field journalists have sought to provide a fresh outlook to understanding the borderlands of India and Myanmar, troubled as they are since both countries became independent.
— Mizzima

Yangon garment workers demonstrate over handling of dispute
Over 100 workers from Zheng Zhang Popular garment factory from Yangon Region, Hlinetharyar Township, No. 2 industrial zone staged a demonstration Friday in front of Hlinetharyar Township Department of Labour Relations office and called on the government to settle labour rights issues and grievances suffered by the workers.
— BNI Online

Yangon MPs Draft Bill to Rein In Mismanagement of Public Funds
Yangon’s lawmakers are drafting a law to stop the authorities wasting funds, awarding contracts behind closed doors and failing to pay taxes on profits.
— Irrawaddy

Certificate course in Enhanced Diplomatic Skills (EDS – 6/2020) inagurates
The Inauguration Ceremony of the Certificate Course in Enhanced Diplomatic Skills (6/2020) conducted by the Strategic Studies and Training Department of the Ministry of Foreign Affairs, was held at Wunzinminyarzar Hall of the Ministry (Yangon) at 10:00 am yesterday with an opening address delivered by U Kyaw Tin,
— The Global New Light of Myanmar

Ethnic Shanni Reject Move to Grow Naga Territory in NW Myanmar
Ethnic Shanni communities in Sagaing Division are speaking out against a move by an ethnic Naga politician to add land to the Naga Self-Administered Zone.
— Irrawaddy

Water and dirty Yangon streets breed diseases
U Kyaw Aung, who is about 50-years-old, moved from Maubin in Ayeyarwady division, to a slum in Yangon over ten years ago. Over 60 migrant households live in the same squat at the corner of Seikkan Thar Street and Wutmasut Wun Htauk Street in Industrial Zone No. 4, Yay Okkan Ward, Hlaing Tharyar township.
— Myanmar Times

Myanmar’s five Ms: misunderstanding, mistrust, misinterpretation, misconception and mistreatment
These stresses, compounded by the missteps of successive administrations, have led the country to fall into a deep chasm of political and ethnic disunity and its development to lag behind other countries in the region.
— Aspi Strategist

New insolvency legislation passed
Pyidaungsu Hluttaw on February 14 passed a new Insolvency Law to further strengthen the business environment and draw more foreign investors to the country. The new legislation will become effective after a notification is issued by the President of Myanmar.
— Myanmar Times

Enforcing safety rules can help prevent accidents in heavy fog season
Fog is a major travel hazard in the winter season in Myanmar on account of the resulting poor visibility.
— The Global New Light of Myanmar

Blame game between Tatmadaw and AA over shelling on primary school
The Tatmadaw (Defence Services) and Arakan Army (AA) are blaming each other for shelling on the Khami Chaung village post-primary school in Buthidaung Township, Rakhine State.
— BNI Online