Malaysia morning news for May 8 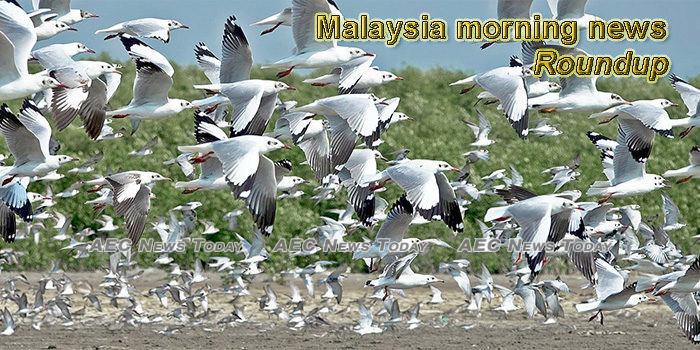 Malaysia Criticizes WHO Advisory Against Consuming Palm Oil During Pandemic
The World Health Organization’s Regional Office for the Eastern Mediterranean published a nutrition advisory for adult consumers while the COVID-19 outbreak lasts, suggesting, among others, to consume olive, sunflower or canola oil instead of palm or coconut oil, a recommendation drawing criticism from Malaysia, Reuters reported.
— Olive Oil Times

How China & Kuwait Funnelled 1MDB Kickbacks To Pay Jho’s Low’s Top US/UK Law Firms EXCLUSIVE
As part of his legal settlement over the Department Of Justice civil case late last year (criminal charges remain pending) Jho Low was allowed to set aside some $15 million from the assets seized in the United States to pay the law firms who had defended that action, including Kobre & Kim and UK based Schillings.
— Sarawak Report

Manhunt in Malaysia as 145 workers flee quarantine
Nerves frayed in the Malaysian capital, Kuala Lumpur, this week when 145 workers went on the run from a construction site that had seen an outbreak of Covid-19 cases, prompting a police manhunt.
— Global Construction Review

Time to Embrace, Not Shun, Malaysia’s Migrant Community
Malaysia should recognize our shared humanity and welcome neighbors in need.
— The Diplomat

Malaysia: US Justice Officials Recover another $49M in 1MDB Funds
The U.S. government has recovered another $49 million tied to the corruption-plagued Malaysian state fund 1MDB that allegedly was used to purchase luxury properties in California and New York City, the Department of Justice (DOJ) announced.
— Benar News

FMM: Section 17A of MACC Act should go on as scheduled
The Federation of Malaysian Manufacturers (FMM) is urging the government not to backtrack on the implementation and enforcement of Section 17A of the Malaysian Anti-Corruption Commission (Amendment) Act 2018.
— The Borneo Post

Felda distributes aid worth RM6.7m to settlers affected by MCO
The Federal Land Development Authority (Felda) has begun distributing RM5.6 million worth of essential goods to 112,638 of its settlers affected by the movement control order, its director-general Datuk Othman Omar said.
— Malay Mail

Interstate travel: Smooth traffic flow on major highways
The first day of interstate travel for applicants of Gerak Malaysia to return home after being stranded at various locations in Kuala Lumpur following enforcement of the Movement Control Order (MCO) saw smooth flow of traffic on major expressways and at toll plazas leaving out of the federal capital.
— The Sun Daily

Survey: More Malaysians mentally adapted to live under lockdown by third MCO phase
Anxiety filled most Malaysian hearts when the government imposed the first two weeks of lockdown to curb Covid-19. But by the fourth week, more had adapted and began to feel at ease with the restrictions, a survey by market.
— Malay Mail

Anwar: MOF had no choice but to waive moratorium interest rates following public pressure
Datuk Seri Anwar Ibrahim described the government’s announcement over the banking sector’s decision to waive the additional interest or profit charges on installments for hire-purchase loans during the moratorium as…
— Malay Mail

MOPV vaccine exercise in Sabah postponed to June
The polio immunisation exercise in Sabah, involving the administration of the monovalent oral polio vaccine (mOPV) that was supposed to have been carried out in April, has now been pushed forward to June.
— The Sun Daily

Health reforms must survive political transitions: Expert
Malaysia needs a sustainable Health Reform Act that could survive any changes over time, according to a health systems specialist.
— The Sun Daily

Interstate travel for those stranded due to MCO begins today
Entering the fourth day of the implementation of the Conditional Movement Control Order (CMCO) today, the focus is certainly on the interstate travel of those who were stranded at various locations in the country since enforcement of MCO last March 18 to return home.
— The Sun Daily

MTUC chides Putrajaya for forcing state govts to abide by CMCO
The Malaysian Trade Union Congress (MTUC) said that all states in the country should be given the flexibility to decide the pace at which their respective economies are reopened under the conditional movement control order.
— Malay Mail

City’s poor to get daily essentials
Kuching South City Council (MBKS) is collaborating with Everrise in a ‘You Donate, We Deliver’ donation campaign.
— New Sarawak Tribune

No additional charges to be imposed on repayments for HP loans: MOF
No additional interest/profit charges will be imposed on borrowers with conventional hire-purchase loans or Islamic fixed-rate financing during the six-month moratorium period, said Finance Minister Tengku Datuk Seri Zafrul Abdul Aziz.
— The Sun Daily

Selangor MB sacks six city councillors within a day
Six city councillors in Selangor were sacked in a day by Mentri Besar Datuk Seri Amirudin Shari, as those who had their tenures terminated decried a political vendetta behind the move.
— Malay Mail

Survey: Fewer Malaysians look to Facebook for Covid-19 news as some shift to MoH for updates
A survey by market research firm Vase.ai found the majority of Malaysians still looked to Facebook as their primary source of information on Covid-19, although consumption dropped after the movement control order was.
— Malay Mail

Ismail Sabri: Whole company will be shut down if a single worker gets Covid-19
Authorities will shutter the entire operations of any firm that has even one worker infected with the coronavirus disease (Covid-19), according to Datuk Seri Ismail Sabri Yaakob.
— Malay Mail

Full Parliament meet needed as ministers using Covid-19 as ‘blank cheque’, says Kit Siang
Lim Kit Siang made yet another bid today for a full parliamentary meeting on May 18, insisting that Covid-19 spending must be examined as some ministers were allegedly using the pandemic as an excuse to act without oversight.
— Malay Mail

In heart of KL, traders struggle to find way back from business wilderness of MCO
Textile traders at Jalan Tuanku Abdul Rahman and Masjid India are finding it hard to revive their businesses that have been shut for over 40 days as a result of the movement control order (MCO).
— Malay Mail

SMC should have been ready for appointment of rubbish collection contractor – MCA
The Sandakan Municipal Council (SMC) should have been ready for the appointment of a contractor to handle rubbish collection and cleanliness in Sandakan a few months before the contract of the previous contractor expired end of April, said Malaysian Chinese Association (MCA) central committee member Datuk Chew Kok Woh.
— The Borneo Post