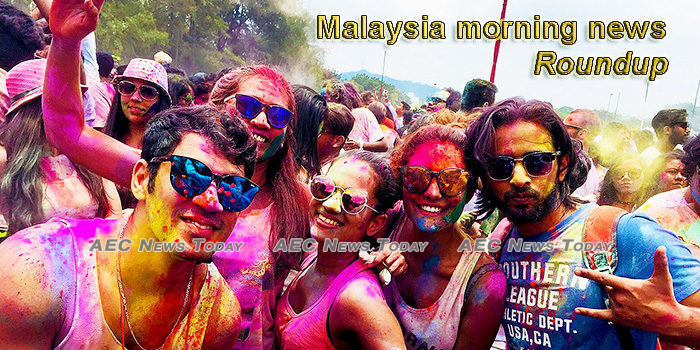 Malaysia, Thailand bar cruise ship over COVID-19 fears
Malaysia and Thailand have barred a cruise ship carrying about 2,000 people, including dozens of Italians, from docking due to fears about the new coronavirus, an official said Sunday (Mar 8).
— CNA

Cabinet line-up expected to be announced Tuesday: Zuraida
The new federal Cabinet line-up is expected to be announced Tuesday, according to Ampang MP Zuraida Kamaruddin.Zuraida also expressed hope that at least 30% of the line-up selected by Prime Minister Tan Sri Muhyiddin Yassin would be comprised of women, to enable more female-friendly policies to be adopted.
— The Sun Daily

Churches in Sabah take measures to curb Covid-19
For over a month now, churches no longer provide holy water at the entrance for Catholics to apply to their foreheads to make the sign of the cross.
— The Star Online

Prepare White Paper on state’s demands, GPS told
Sarawak People’s Aspiration Party (Aspirasi) president Lina Soo today urged the ruling Gabungan Parti Sarawak (GPS) to come up with a White Paper that will set out a roadmap which lists all the legitimate demands of.
— Malay Mail

No Covid-19 positive case at Jasin Hospital
The Malacca Health Department has refuted a viral claim on social media that a Covid-19 case has been transferred to the Jasin Hospital for treatment.
— The Sun Daily

Six years on, families demand new search for MH370
Six years since Malaysia Airlines flight MH370 vanished from radars, relatives of the 239 people who were on board are calling on authorities to revive efforts to find the missing plane.
— The Sun Daily

Covid-19 prompts Selangor govt to advise cancellation of public events
The Selangor government today advised all events involving public participation to be postponed following the second wave of Covid-19 infection in the country.
— The Sun Daily

Malaysia confirms 10 new COVID-19 cases, all close contacts of a previous case
The Ministry of Health confirmed 10 new cases of COVID-19 on Saturday (Mar 7), bringing the total number of cases in Malaysia to 93.
— CNA

Covid-19: BNM’s RM3.3b fund, banks’ preparedness will help alleviate SMEs’ financial burden
As the COVID-19 outbreak widens with Malaysia entering the second wave of spread, the banks’ preparedness along with measures undertaken by Bank Negara Malaysia (BNM) are a shot in the arm for the Small and Medium Enterprises (SMEs) during this difficult time.
— The Sun Daily

At Women’s Day march in KL, youths urge child marriage ban now, highlight climate crisis
Malaysians who gathered today in the nation’s capital in conjunction with International Women’s Day listed seven key demands, with one of the most prominent messages being the call for a ban to child marriages which are.
— Malay Mail

Merger of parties not the only way to build strong political force, says Jeffrey
The Sabah Star leader says coalitions have also proven to work many times, including BN’s victory in the recent Kimanis by-election.
— FMT News

Couple caught red-handed with drugs, believed to be dealers
A couple in their twenties were arrested with possession of 24.1g of syabu and police believe they may have been dealing the drugs around Inanam town.
— The Star Online

Bakun dam’s water release will not cause floods: Sarawak
Any controlled release of water from the Bakun Dam in Belaga in the central interior of Sarawak will not cause floods in the downstream areas, State Utilities Minister Datuk Dr Stephen Rundi Utom said today.
— The Sun Daily