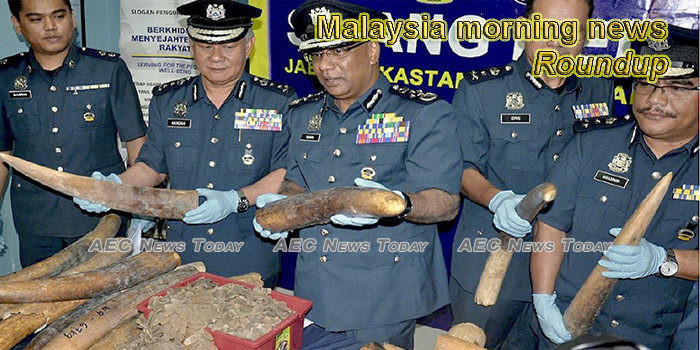 How a $7 billion dispute helped bring down Malaysia’s Mahathir
In the weeks before his shock resignation as prime minister threw Malaysia into turmoil, Mahathir Mohamad was getting agitated.
— The Jakarta Post

CM: Civil servants in Melaka must remain calm, carry on with duties
Civil servants in the state are reminded to maintain their work quality and remain calm in carrying out their duties in accordance with the laws and policies of the government.
— Malay Mail

Health Ministry investigates people close to infected Khazanah executive
It’s +1 in Malaysia’s Covid-19 case tally after a Khazanah senior executive was confirmed to have the virus on Sunday.The Health Ministry said it initiated an investigation immediately, following claims of an ex-minister and his deputy coming into close contact with the infected individual.
— The Sun Daily

Proton’s market share hits 77-month high
National carmaker Proton posted strong results for the second consecutive month of 2020 with sales growing over 80 per cent in February compared to the same month last year, garnering 23.8 per cent of the month’s market share, its highest since August 2013.The company said a total of 9,974 units of vehicles were registered.
— The Sun Daily

Now, MIDA also postpones annual review over Covid-19 fears
The Malaysian Investment Development Authority (MIDA) announced today that its media conference on its annual performance has been postponed as a precaution to the coronavirus disease (Covid-19) outbreak.
— Malay Mail

Explainer: What are the possible scenarios of a no-confidence motion in Malaysian parliament?
Malaysia has been rocked by political upheaval over the last week, with the shock resignation of Dr Mahathir Mohamad, the collapse of Pakatan Harapan (PH) and Mr Muhyiddin Yassin being sworn in as the country’s eighth prime minister.
— CNA

Health D-G: Family, secretary of 26th Covid-19 patient cleared
The family members and secretary of a senior government-linked corporation (GLC) executive who contracted the coronavirus disease (Covid-19) have all tested negative for the virus.
— Malay Mail

Muhyiddin to meet KSN, dept heads on his first day as PM
Newly-minted Prime Minister Tan Sri Muhyiddin Yassin who began his first day in office today, is scheduled to meet with the Chief Secretary to the Government (KSN) and heads of departments and agencies to coordinate the administration of the government.
— The Sun Daily

Manufacturing sector tested by Covid-19, PMI slips to 48.5
Malaysia’s manufacturing Purchasing Managers’ Index (PMI) fell to 48.5 in February, from 48.8 in January, as the delivery of key raw materials from China was disrupted by the coronavirus outbreak, according to a note by IHS Markit.
— The Sun Daily

Bursa Malaysia settles 1.06% lower at 1,466.94
Bursa Malaysia recouped some of its earlier losses to settle 1.06 per cent lower today as investors remained uncertain over the local political developments amid lingering Covid-19 fears.
— The Sun Daily

Prosecutors to cite Zahid for contempt after bid to delay trial repudiated by PMO
Prosecutors today sought to move the High Court to cite Datuk Seri Ahmad Zahid Hamidi for contempt, after the Umno leader allegedly made false representation to the court to postpone his ongoing corruption trial this.
— Malay Mail

Malaysia’s new PM Muhyiddin Yassin takes office amid economic challenges
Muhyiddin Yassin took office as Malaysia’s new prime minister on Monday, capping a week of political chaos caused by the shock resignation of Mahathir Mohamad, and as the country’s economy weakens mainly due to the spread of the coronavirus.
— CNA

Perak excos soldier on while in the dark about the fate of Pakatan state government
Perak Pakatan Harapan (PH) state executive committee chairmen are uncertain if the state government is still valid after the realignment of political parties that led to Tan Sri Muhyiddin Yassin becoming the prime minister.
— Malay Mail

UDA board member confirmed Covid-19 positive
UDA Holdings Berhad (UDA) confirms that one of its board members has tested positive for Covid-19. In a statement today, UDA said that the affected individual is now being quarantined in a government hospital.
— The Borneo Post

My case not dropped, just postponed for today, says Zahid Hamidi
Umno president Datuk Seri Dr Ahmad Zahid Hamidi said his ongoing court case was only postponed for one day and has not been dropped. He said the trial would resume tomorrow.
— The Borneo Post

Ex-Sarawak PKR duo defend decision to support Muhyiddin as PM
Two former PKR lawmakers today defended their decision to support Tan Sri Muhyiddin Yassin as the prime minister after they were accused of betraying the trust of voters in Sarawak by jumping ship before the collapse of Pakatan.
— Malay Mail

Despair yesterday, spirit to fight corruptors today: Hannah Yeoh
Segambut Member of Parliament Hannah Yeoh (pix) may have been a casualty of the recent political crisis, losing her position as the Deputy Minister for Women, Family and Community development, but her spirit to serve continues.
— The Sun Daily

Johor PAS congratulates PM, urges rakyat to support new leadership
Johor PAS today congratulated Tan Sri Muhyiddin Yassin on his appointment as the eighth Prime Minister while urging the people to give their support to the government and the country’s new line of leadership.
— The Sun Daily

Najib’s son fails to stay proceedings of IRB suit
The High Court here has dismissed former Prime Minister Datuk Seri Najib Razak’s son, Datuk Mohd Nazifuddin’s application for a stay of proceedings of the Inland Revenue Board (IRB) lawsuit against him to seek RM37.6mil in unpaid taxes, pending an appeal on the tax assessment to the IRB.
— The Star Online

Civil servants in Malacca must remain calm, carry on with duties: CM
MALACCA: Civil servants in the state are reminded to maintain their work quality and remain calm in carrying out their duties in accordance with the laws and policies of the government.
— The Sun Daily

No clampdown as long as people adhere to the law, says IGP
Inspector-General of Police Tan Sri Abdul Hamid Bador (pix) said today that police will not restrict or prohibit the people from expressing their discontent over the current political situation as long as it is carried out within the perimeters of the law.
— The Sun Daily

PM: No meeting with political leaders today
Prime Minister Tan Sri Muhyiddin Yassin is not meeting any political leaders today, his office said.The statement was issued after Umno president Datuk Seri Ahmad Zahid Hamidi’s corruption trial was adjourned this morning apparently for him to meet the prime minister to discuss the formation of the new Cabinet.
— The Sun Daily