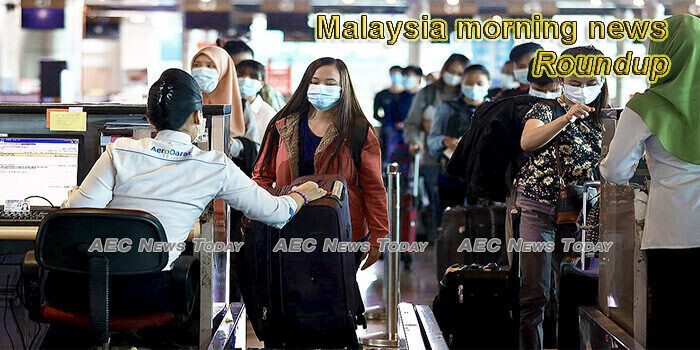 Let’s fight racism in Malaysia with verbal hygiene
It’s good to know that more and more of us in Malaysia are showing support in many forms for the #BlackLivesMatter (BLM) movement that was sparked in the United States when African-American George Floyd was killed while in custody by a white police officer.
— The Star Online

MCO diets drive up Malaysia’s obesity rates
Many Malaysians have been complaining about their weight gain during the movement control order (MCO) period, which was not really a surprise considering that they were homebound and less active physically.
— The Star Online

Malaysia MOP imports jump in April
MOP deliveries to Malaysia are accelerating from a slow start to the year, as restocking ramps up after a protracted MOP tender season.
— Argus Media

Covid-19: US businesses in Malaysia adjusting, seizing opportunities
United States-based companies in Malaysia have resumed operations and are adjusting to the— with a focus on mitigating the risks that emerged while driving efficiency and productivity.
— Malay Mail

Minister says no cost overrun in Gemas-JB EDT rail project despite delay
The Gemas-Johor Baru electrified double-tracking (EDT) rail project will not experience any increase in overall cost even though it is expected to be completed one year later than the initial date.
— Malay Mail

Peter Anthony down with vertigo, case postponed to July 10
The court case involving Sabah Infrastructure Development Minister Datuk Peter Anthony who is due to face charges under the Malaysian Anti-Corruption Commission Act in the Sessions Court today, has been postponed to July 10 after he was admitted to a hospital in Kota Kinabalu.
— The Borneo Post

Obesity rate at worrying levels in Malaysia
Many netizens have been complaining about their weight gain during the movement control order period, which was not really a surprise considering that they were homebound and less active physically.
— Malay Mail

Ex-PKR leader told to show proof of mass resignation or face legal action
Another former Parti Keadilan Sabah (PKR) leader who claimed to have resigned from the party with 2,000 members will be asked to furnish their names and membership numbers to the state leadership.
— The Borneo Post

Timing of suit against Musa suspicious – Abdul Rahman
Umno Supreme Council member Datuk Seri Abdul Rahman Dahlan questioned the timing of Sabah Foundation’s suit against former chief minister Tan Sri Musa Aman.
— The Borneo Post
More than four to a table: Businesses rejoice but customers still wary of crowds at eateries
Even as restaurants are finally allowed to operate at full capacity — no more just four customers to a table — there are those who have yet to venture outside their homes for a meal.
— Malay Mail

In Johor, around 50 PKR women leaders quit party and declare support for Perikatan
Around 50 Johor PKR women leaders, including those from the national, state and divisions, have quit the party today after claiming they have lost confidence with the party.
— Malay Mail

As impasse on PM candidate remains, DAP and Amanah urge Anwar and PKR to accept six-month wait
DAP and Amanah urged allies in the so-called “Pakatan Plus” grouping to reach a compromise today, saying they were duty-bound to regain control of the government from the unelected Perikatan Nasional.
— Malay Mail

Snap election best way to resolve Malaysia’s political issues, says Mahdzir
A snap general election is the best solution to resolve the current political issues, especially with regard to the difference between the number of government and opposition members of parliament, said Umno vice-president.
— Malay Mail

Cambodia Morning News For May 2