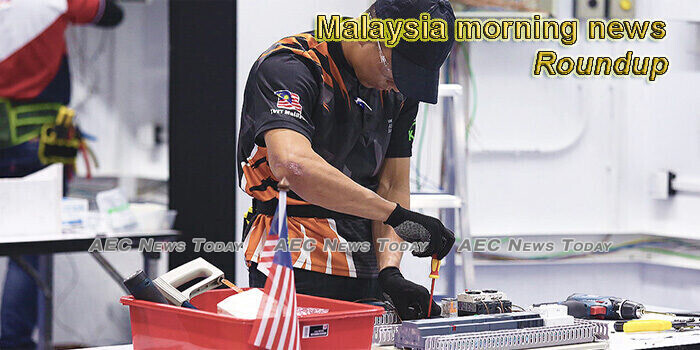 Malaysia’s tourism faces RM45 bln in losses due to Covid-19 – Nancy
The country’s tourism sector is estimated to suffer losses amounting to RM45 billion this year as a result of the closure of the country’s borders due to the Covid-19 pandemic, said Tourism, Arts and Culture Minister Datuk Seri Nancy Shukri.
— The Borneo Post

Malaysia’s May jobless rate rises to 5.3%
Malaysia’s unemployment rate escalated to 5.3% in May 2020 to 826,100 unemployed persons, from 5% in April, according to the Department of Statistics Malaysia.
— The Sun Daily

Dr Mahathir says against nepotism, removed cousin over corruption taint, now nephew won’t talk to him
Tun Dr Mahathir Mohamad reiterated today that he will not tolerate nepotism, disclosing that it had even estranged him from some of his relatives.
— Malay Mail

Covid-19 vaccine to be bottled by two local firms once discovered – Khairy
The government has identified two local pharmaceutical companies to fill and finish the Covid-19 vaccine once it is made available.
— The Borneo Post

15% fee reduction for public varsity students due to MCO, says Higher Education Minister
Students at public higher learning institutions will get a reduction of up to 15% for their hostel, administrative and activity fees, says Datuk Dr Noraini Ahmad.
— The Star Online

The Coalition Of Crooks Just Performed Another Illegal Act
The first vote to test the strength of the backdoor government of ‘PM8′ has apparently proven the claim that he lied to the Agong back in February when he claimed he had a majority of MPs.
— Sarawak Report

Tarek’s Treasure Trove Tagged In London
Whilst Swiss prosecutors have dragged their feet for over two years examining a slew of alleged crimes by the Saudi director of PetroSaudi, Tarek Obaid, the said suspect has been observed continuing to live it up as normal in Geneva, wallowing in his usual nightspots and ordering champagne at 6 Star hotels.
— Sarawak Report

LRA SSP3 upgrading work completed, water supply registration begins today
The restoration of water supply to areas affected by the work to replace and upgrade the critical assets at Sungai Selangor Water Treatment Plant Phase 3 (LRA SSP3) has begun at 9 am today and will continue until 5 pm on Friday.
— The Sun Daily

SMK Merbau Miri blazes trail with QR code for students’ records, safety
SMK Merbau Miri has taken the initiative of introducing the Quick Response (QR) code to speed up the process of recording students’ details after they have had their temperature checked and managing their records.
— The Borneo Post

Passenger, aircraft movements doubled in the first nine days in July – MAHB
Air travel in Malaysia showed further signs of recovery in the first nine days of July compared to June, thanks to the relaxation in travel restrictions which continue into the second month, according to Malaysia Airports Holdings Bhd (MAHB).
— The Sun Daily

MCO did not dampen buying interest, iProperty survey shows
The implementation of the movement control order (MCO) from March 16 to contain the Covid-19 pandemic did not dampen interest in property as prospective seekers increased to 45% from 44% prior to the containment measures, according to a survey by iProperty.com.my.
— The Sun Daily

Petaling Jaya woman suffers RM700,000 losses in Macau scam
A female civil servant suffered losses of almost RM700,000 after a Macau scam syndicate duped her into believing she was involved in a money-laundering scheme.
— Malay Mail

Ministry to create roadmap for national vaccine development: Khairy
A roadmap serving as a blueprint for the National Vaccine Development will be created to ensure the country’s safety and self-reliance and safety concerning vaccines.
— The Sun Daily

Was Immigration action too harsh?
The decision to revoke the work permit of a Bangladeshi who criticised the government for its handling of immigrants during the movement control order (MCO) was met with mixed response.
— The Sun Daily

Smooth reopening of schools as students, teachers comply with SOP
After more than four months of “leave” following the movement control order (MCO) which was enforced to curb the spread of the Covid-19 pandemic, the re-opening of schools in the new normal today went smoothly in.
— Malay Mail

Stop targeting transgender people for ‘rehabilitation’: Aliran
Aliran expressed alarm and concern in learning that the Minister in the Prime Minister’s Department in charge of religious affairs, Zulkifli Mohamad Al-Bakri, has given “full licence” to the Federal Territories Islamic Religious Department (Jawi) to arrest transgender people and provide them with religious education so that “they will.
— The Sun Daily

Glomac sees revenue of RM58.39 million for 4Q
Glomac Bhd posted a net loss of RM8.6 million for the fourth quarter ended Apr 30, compared to a net profit of RM11.21 million in the previous corresponding quarter on fair value loss on investment properties.
— The Sun Daily

Transport minister: Cabinet has approved harsher penalties for drunk drivers
The Cabinet has given its approval in principle to amend Sections 41 to 45 of the Road Transport Act, allowing for harsher penalties against those found to be driving under the influence of drugs and alcohol, said Datuk.
— Malay Mail

Optimism over oil prices returns but risks remain: AmInvestment Research
Even though a measure of optimism has returned for crude oil prices, oil producers are expected to proceed with their planned production cuts for this year, given that demand globally remains depressed amid the prolonged Covid-19 movement restrictions and social distancing measures which could mean potentially long-term changes in energy.
— The Sun Daily

Teachers, parents express relief over SDMC’s decision to postpone school reopening in Kuching division
Teachers and parents have expressed relief that the Sarawak Disaster Management Committee (SDMC) has decided to postpone the reopening of schools for Transition Classes, Form 1 to Form 4 and Lower 6 classes in three Districts within Kuching division for now.
— The Borneo Post