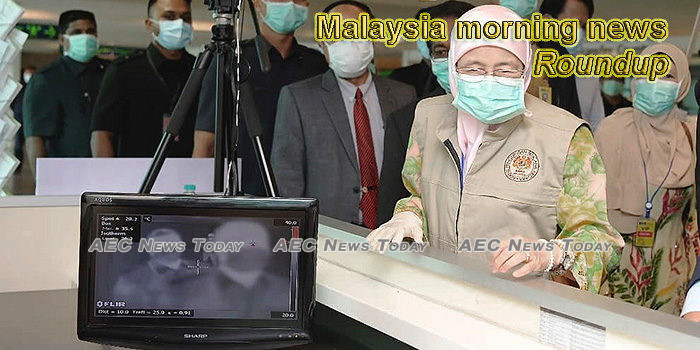 MCA criticises govt’s response to coronavirus outbreak
The MCA has slammed the government for allegedly not being proactive enough in combating the novel coronavirus (2019-nCoV) outbreak.
— The Sun Daily

Bersatu’s top three leaders get unanimous support from state reps ahead of party polls
It would appear that the top three leaders in Pakatan Harapan (PH) coalition’s youngest party, Parti Pribumi Bersatu Malaysia, need not fear being dislodged from their positions at the upcoming internal elections.
— Malay Mail

Journalists union urges govt to drop public mischief charge against award-winning newsman
The National Union of Journalists (NUJ) has appealed to the government to withdraw charges against a veteran journalist accused of causing public alarm over the ongoing Wuhan virus outbreak.
— Malay Mail

Ringgit closes lower against US dollar
The ringgit closed lower against the US dollar today, as the greenback firmed, supported by relatively solid US economic data and uncertainties surrounding the Coronavirus outbreak, a dealer said.
— The Sun Daily

No such thing as ‘unofficial’ gag order, says Sabah and S’wak Chief Judge
A Sessions Court judge did not issue a gag order to the media not to name a former state Malaysian Communication and Multimedia Commission (MCMC) deputy director in connection with a graft case, says Tan Sri David Wong Dak Wah.
— The Star Online

CJ of Sabah and Sarawak says press free to name ex-MCMC official charged with corruption
The press may name the former Malaysian Communication and Multimedia Commission (MCMC) deputy director charged with criminal breach of trust despite being told not to by a judge, Tan Sri David Wong clarified today.
— Malay Mail

1 to 3 months for government guarantee to be approved, says Mohd Irwan
The High Court here today was told that the average time for the Government Guarantee application to be approved by the Cabinet is one to three months.
— The Sun Daily

Bank officer requested RM6 mln in RM100 bills for Rosmah, court told
The High Court was told today that the bank that was used to withdraw money to pay an alleged bribe to Datin Seri Rosmah Mansor was short on bills on both occasions.
— The Borneo Post

ChemOne launches US$3.38b PEC in Johor
ChemOne Group, an oil and gas, petrochemicals and natural resources conglomerate, has announced the launch of the US$3.38 billion Pengerang Energy Complex (PEC) in Johor.
— The Sun Daily

Decision on Petronas’ application for stay of suit hearing on Feb 11
A High Court here fixed Feb 11 to deliver its decision on the application by Petroliam Nasional Berhad (Petronas) for a stay of proceedings of a lawsuit filed by Sarawak Comptroller of State Sales Tax (SST) and the state government against them.
— The Sun Daily

Prosecution to prove Rosmah received RM6.5 mln cash over solar project
The prosecution will prove that Datin Seri Rosmah Mansor had used her influence to receive a bribe of RM6.5 million in cash from a company as an inducement to help the company obtain a solar hybrid project, the High Court was told today.
— The Borneo Post

Road users’ attitudes a contributing factor to increasing accidents, says Lam Thye
The inability of Malaysians to practise road safety culture is the reason why road accidents are on the rise every year, says Tan Sri Lee Lam Thye.
— The Star Online

We’ve been transparent about coronavirus since Day 1, says health minister
Health Minister Dzulkefly Ahmad says they have tracked 74 people who came into close contact with Malaysia’s 10th coronavirus patient and 33 of them are healthcare workers.
— FMT News

Water in Sungai Muda river being tested after e-waste scare
Water company may consider shutting out river water if found to be polluted but warns of supply interruption to millions in Penang.
— FMT News

Johor official urges public not to trust unverified info on Wuhan virus
A Johor official said the public should only use official sources of information on the novel coronavirus (2019-nCoV) outbreak.
— Malay Mail

Malaysia doing ‘very, very well’ in handling Wuhan virus contagion, says WHO rep (VIDEO)
A representative from the World Health Organisation (WHO) today commended Malaysian authorities for its open and informative management of the Wuhan virus outbreak since it spread from Chinese to 28 other countries.
— Malay Mail

12 detained so far by MCMC over coronavirus fake news
The Malaysian Communication and Multimedia Commission (MCMC) has detained a total of 12 individuals throughout the country for posting fake news on the novel coronavirus (2019-nCoV).
— The Star Online

Goldman Sachs (Singapore) PTE case on bonds worth RM27.2b, transferred to High Court
The prosecution’s application to transfer its case filed against Goldman Sachs (Singapore) Pte in connection with the issuance of 1Malaysia Development Berhad (1MDB) bonds worth RM27.2 billion (US$6.5 billion), from the magistrates court to the High Court here today, was allowed.
— The Sun Daily

Two more M’sians confirmed with coronavirus, total cases at 12 (Updated)
Two Malaysians who were part of the group that returned from Wuhan, China, on Tuesday morning, have tested positive for the novel coronavirus (2019-nCoV).
— The Sun Daily

Johor govt to postpone all events involving crowds
The state government has decided to postpone all its events in February that involve large crowds following the coronavirus outbreak.
— The Star Online

Melcat to ex-CM: Show us proof that Johor stopped water sale to Melaka
Following contradictory statements made by the former and current chief ministers regarding the sale of raw water from Johor to the state, the Melaka Select Committee on Competency, Accountability and Transparency (Melcat) says it will accept evidence that Datuk Seri Idris Haron supposedly has on the issue.
— The Star Online

SRC trial: Former Treasury sec-gen says application for govt guarantees usually takes months, not days
A former senior government official told the court today how companies seeking government guarantees would usually have to wait between one to three months to see the application go through, and that it was not a matter.
— Malay Mail

DOSH: RM50k fine, two years jail for employers who fail to protect workers against Wuhan coronavirus (Video)
Employers who fail to protect their employees against the Wuhan coronavirus can be fined up to RM50,000 or face up to two years of imprisonment, says Department of Occupational Safety and Health (DOSH) Sarawak director Dr Nor Halim Hasan.
— The Borneo Post

Rosmah could influence govt’s decisions, court told
Even without an official position, Datin Seri Rosmah Mansor, the wife of the former Prime Minister had allegedly acted “bossy” which could influence decisions in the government, the High Court was today told.
— The Borneo Post

Personal hygiene of utmost importance, warns expert amid coronavirus threat
Parents should take preventive measures to protect their children against any viral infection, more so now in light of the 2019 novel coronavirus (2019-nCoV) outbreak.
— Malay Mail

Too-tall trailer hits Penang pedestrian bridge near ferry terminal, nearly brings it down (VIDEO)
An overhead bridge in front of the Penang Ferry Terminal at Weld Quay nearly collapsed onto the highly trafficked road below this evening when a 16-wheeler trailer crashed into it.
— Malay Mail