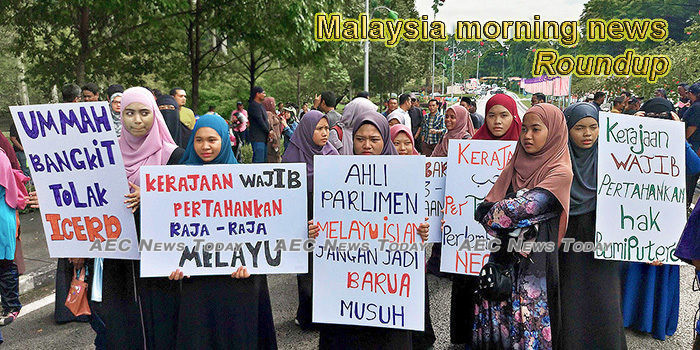 UM graduate claims trial over alleged provocative remarks in VC protest
Universiti Malaya (UM) graduate Wong Yan Ke has claimed trial at the Magistrate’s Court today for allegedly attempting to provoke a breach of the peace over his protest against the university’s vice-chancellor Datuk.
— Malay Mail

District council issues stop work order for project on reforestation land
A stop-work order has been issued to the Perak Corporation Berhad (PCB) for carrying out works at a plot of reforestation land in Tanjung Malim without prior approval from the authorities.
— The Star Online

Commentary: Mahathir Mohamad remains the eye of the political storm brewing in Malaysia
Prime Minister Mahathir Mohamad has emerged from the fray unscathed so far. He remains unbeatable, even if a snap election were to be called, says James Chin.
— CNA

Civil servants urged to stay apolitical: Cuepacs
The Congress of Unions of Employees in the Public and Civil Services (Cuepacs) has urged all civil servants in the country to remain apolitical and to keep abreast of the current political situation.
— The Sun Daily

Sarawak CM: Politicians’ greed for power reason for Pakatan’s collapse
Chief Minister Datuk Patinggi Abang Johari Openg today said the collapse of the Pakatan Harapan (PH) federal government is caused by greed for power. “It is all about fighting who should be the prime minister.
— Malay Mail

NAP 2020 an effort to develop automotive ecosystem
The level of granularity featured in the National Automotive Policy 2020 (NAP 2020), in comparison to its predecessors, signifies the government’s steadfast efforts in ensuring that a considered policy document is put in place to develop the automotive ecosystem in Malaysia.
— New Sarawak Tribune

Putra veep pleads not guilty over racist remarks on social media
Lawyer Mohd Khairul Azam Abdul Aziz today claimed trial at the Magistrate’s Court here for racial incitement He was charged under Section 505(c) of the Penal Code for allegedly trying to incite Malays to commit an offence.
— Malay Mail

Sime Darby’s Q2 earnings slip 11% to RM282m
Sime Darby Bhd’s net earnings for its second quarter ended Dec 31, 2019 saw a 11% dip to RM282 million, from RM317 million in the same quarter a year ago, on the recognition of a deferred tax credit of RM129 million arising from the change in real property gains tax (RPGT) rates in the previous corresponding period.
— The Sun Daily

Second batch of Malaysians back from Wuhan undergo mandatory quarantine in Nilai
A total of 66 individuals, comprising 46 Malaysian citizens and 20 of their non-citizen family members, who arrived from Wuhan, China this morning, are being housed at the monitoring centre at the Higher Education Leadership.
— Malay Mail

Wee: 12 mobile bus stops to be set up in MBKS area to cater for free school bus service initiative
A total of 12 mobile bus stops will be set up in the area under the jurisdiction of Kuching South City Council (MBKS) to cater for the free school bus service initiative as announced by the Sarawak government in 2020 State Budget last year, said its mayor Dato Wee Hong Seng.
— The Borneo Post

Optimax to issue 70m new shares for ACE Market listing
Optimax Holdings Bhd is heading for a listing on the ACE Market of Bursa Malaysia Securities Bhd, with its initial public offering (IPO) entailing a public issue of 70 million new shares.Of this, 13.5 million shares will be made available by the Malaysian public; 4 million shares for eligible employees and directors; and 52.5 million shares.
— The Sun Daily

Talk of Anwar’s nomination for PM renews uncertainty gripping Malaysian politics (VIDEO)
A series of news reports and cryptic quotes from PKR lawmakers now suggest that Datuk Seri Anwar Ibrahim may have been named as Pakatan Harapan’s choice for prime minister, despite earlier affirmations of support for Tun.
— Malay Mail

Three eateries, spice store ordered shut over cleanliness issues
Three eateries and a spice store were ordered to shut by the Penang Island City Council (MBPP), after rat droppings and live cockroaches were found separately on their premises.
— The Star Online

Xiaomi Malaysia hands out free power banks to media in front of Istana Negara
These are trying times in the Malaysian political landscape, but it’s always nice to see a little compassion for those who are working tirelessly to keep us up to date on the news.
— Malay Mail

PKR MPs arrive at Istana Negata in open-top bus
If PAS and Umno members of parliament hopped on a bus to the Istana Negara yesterday for their audience with Yang di-Pertuan Agong Al-Sultan Abdullah Ri’ayatuddin Al-Mustafa Billah Shah, the PKR MPs made their trip there today ‘roofless’ by arriving in a ‘Hop-On Hop-Off’ bus.
— The Borneo Post

In a bid to spur domestic tourism, Penangites get 50pc discounts for ticketed attractions in the state
Penang kicked off a “Penang-lang 50% off” campaign to energise the state’s economy today. The Association of Tourism Attractions Penang (ATAP), in collaboration with Penang Global Tourism and the state tourism committee,.
— Malay Mail

Xiaomi Malaysia gives away free power banks to media personnel at Istana Negara
DURING moments like these, it’s both exciting and tiring to be part of the media – even more so for the men and women stationed outside Istana Negara. You may have heard that the reporters who were stationed outside the palace received food from the Agong in the last few days.
— The Sun Daily

MSM loss widens in Q4, chairman to step down as part of deal on FGV directors’ fees
MSM Malaysia Holdings Bhd saw its net loss for the fourth quarter ended Dec 31, 2019 widen to RM40.28 million, from RM10.35 million in the previous corresponding quarter due to the continuous depletion of its average selling prices (ASP) and decline in export volumes throughout the year.
— The Sun Daily

Man and wife arrested, drugs worth RM134k seized
A contractor and his wife were arrested after police found drugs worth more than RM134,000 at their house in Kampung Selamat, Sitiawan.
— The Star Online