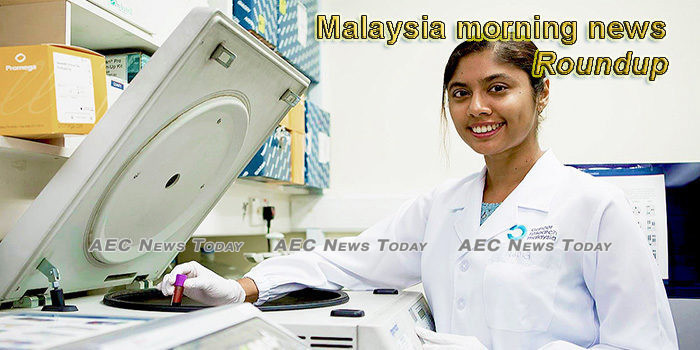 Chinese woman, now in HKL isolation ward, identified as 19th victim of Covid-19
The Health Ministry has identified and confirmed the 19th local victim of the 2019 novel-coronavirus (Covid-19) today.
— The Sun Daily

RTD: We will not compromise on corruption claims, action will be taken
The Road Transport Department (RTD) has vowed to take stern action, including dismissal, against its officers if they are found to be involved in corruption.
— The Sun Daily

Sabah approves 10-year plan to conserve elephants
The Sabah government has approved a 10-year plan for the conservation of the dwindling elephant population in the state.
— The Sun Daily

VMY 2020 target to remain despite Covid-19’s impact, says minister
Tourism, Culture and Arts Minister Mohamadin Ketapi says it is too early to lower the target of 30 million visitors.
— FMT News

Unimas to help expedite tests on Covid-19 suspected cases
Universiti Malaysia Sarawak (Unimas) has offered to assist the Sarawak Health Department to expedite the tests on the people suspected to have been infected by Covid-19, the novel coronavirus disease.
— The Sun Daily

Not proper to use Arab donaton to buy luxury watch: Anifah
The High Court here was today told that it was not proper for former Prime Minister Datuk Seri Najib Abdul Razak to buy a luxury watch for his wife Datin Seri Rosmah Mansor using the so-called Saudi Arabia donation.
— The Sun Daily

Deputy Minister says letter to National Art Gallery was to support freedom of expression
Muhammad Bakhtiar Wan Chik has clarified that the appeal letter he sent to the National Art Gallery (NAG) over censored artworks of a local artist was written in his personal capacity.
— The Star Online

Lynas shares surge 10% on report Malaysia renews rare earths’ plant license
Malaysia has agreed to renew Australian firm Lynas Corp Ltd’s license to operate its rare earths processing plant in the country, Malaysian media reported on Thursday, sending shares of the company up as much as 10%.
— The Sun Daily

Focus on improving economy, not on vote of confidence: Patriot
There are bigger priorities now than a vote of confidence for the prime minister, Persatuan Patriot Kebangsaan (Patriot) said today.
— The Sun Daily

Fly MAS to Tokyo to support #TeamMalaysia and stand a chance to win domestic flight tickets
Chant your way into a return flight ticket to any domestic destination courtesy of Malaysia Airlines (MAS).
— The Borneo Post

Unrestricted digital material can be fake news that destroys society: Mahathir
The abundant unrestricted reading material in the digital arena can be a source of fake news and other content that can destroy society, Prime Minister Tun Dr Mahathir Mohamad said today.
— The Sun Daily

MARC: Monetary, fiscal policy mix needed this year
Following the release of economic growth figures, which surprised on the downside, the Malaysian Rating Corporation Bhd (MARC) believes that a mix of monetary and fiscal policy will be needed over the course of this year to prevent further downside.
— The Sun Daily

Kit Siang: Pakatan Nasional rumours just attempts to disintegrate PH
Speculations of a new Malay-based government dubbed the “Pakatan Nasional” are merely conspiracy theories being played up by the opposition to put an end to Pakatan Harapan’s (PH) reign as the ruling administration.
— The Sun Daily

Sabah govt will leave no stone unturned in quest to solve elephant deaths, says DCM
Five endangered pygmy elephants have died in six weeks, with the latest found dead in a plantation in Lahad Datu area on Sunday (Feb 9).
— The Star Online

From ‘woke-washing’ to doing it for the ‘Gram: What makes Gen-Z tick in Malaysia?
Malaysia’s Generation Z’s behaviour and attitudes are shaped by six pop culture elements, a study by Ipsos UU in Malaysia in partnership with Ogilvy Malaysia has revealed.
— Malay Mail

Sarawak health director dismisses Covid-19 ‘positive’ case as fake news
The Sarawak Health Department has denied that there is a confirmed positive Covid-19 case in the state.Its director Dr Chin Zin Hing said the message being spread on social media was not true.
— The Sun Daily

Rosmah able to influence Najib’s actions as PM, former MoE sec-gen testifies
Datin Seri Rosmah Mansor is very influential, to the point that she can influence the actions of her spouse Datuk Seri Najib Razak within his capacity as the prime minister, the High Court heard today.
— Malay Mail

Unrestricted digital material can be fake news that destroys society – Dr Mahathir
The abundant unrestricted reading material in the digital arena can be a source of fake news and other content that can destroy society, Prime Minister Tun Dr Mahathir Mohamad said today.
— The Borneo Post

After top court ruling, Johor lawyers urge other states to gazette ‘bin Abdullah’ fatwa for illegitimate Muslim children
Other states in Malaysia should emulate Johor by gazetting a religious edict to impose “bin Abdullah” or “binti Abdullah” as part of the names of Muslim children born outside marriage, lawyers for the Johor Islamic.
— Malay Mail