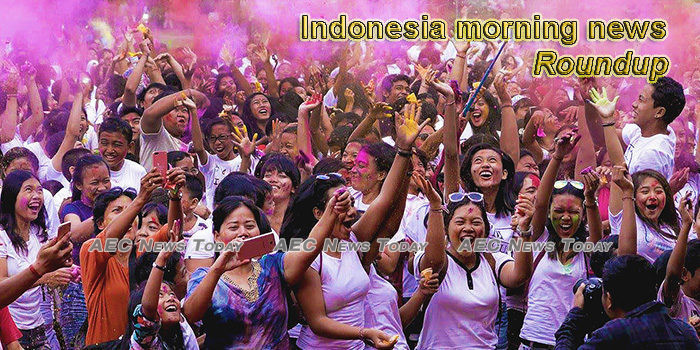 Indonesia to Send 30 Large Fishing Vessels to North Natuna Sea
Indonesia will send 30 large fishing vessels from the nothern Javanese coast – an area known locally as Pantura – to the North Natuna Sea to help assert the country’s sovereignty over the stretch of ocean claimed by China and christened the South China Sea by the Asian giant.
— Jakarta Globe

Indonesia to Have Covid-19 Quarantine Facility Ready by March-end
– The Public Works and Public Housing Ministry said the building facility that will serve as observation, shelter and quarantine center for infectious diseases, including the new coronavirus or Covid-19, will be completed at the end of March.
— Tempo.co

Indonesia Not Disclosing Covid-19 Contact Tracing
The Indonesian government is not disclosing the contact tracing data of people who had interacted with confirmed Covid-19 cases.
— Tempo.co

Indonesian bourse caps stock drops at 10% as equities start to rebound after bruising day
The Indonesia Stock Exchange (IDX) has issued a new regulation that allows stocks, at all price ranges, to fall by a maximum of 10 percent in an effort to anchor the Jakarta Composite Index (JCI) after a deep drop on Monday.
— The Jakarta Post

Two COVID-19 Patients Tested Negative Yet Still Being Isolated
The government announced today, March 10, that two out of nineteen COVID-19 patients have been declared negative for the virus yet still being isolated until the second test.
— Tempo.co

Dutch King Offers Apology for Past Violence
Dutch King Willem-Alexander offered a public apology to Indonesia over past excessive violence committed by its colonial troops during years after Indonesia declared its independence on August 17, 1945.
— Tempo.co

Indonesia prepares additional measures to stabilize markets, halt tax payments amid virus risks
Indonesia is preparing measures similar to those made during the 2008 global financial crisis, including buying back government bonds and halting income tax, to restore confidence in the financial markets and soften the economic impacts of COVID-19.
— The Jakarta Post

Europe, Middle-East among regions poised to offset decreasing investments from China
The Investment Coordinating Board (BKPM) is setting its sights on alternative sources of foreign direct investments (FDI) because it expects the COVID-19 outbreak is about to cause a sharp decline in the flow of investments from China, Indonesia’s second-largest foreign investor.
— The Jakarta Post

IMF calls for ‘substantial’ stimulus, coordination against virus
The International Monetary Fund called on governments worldwide Monday to join forces and roll out aggressive financial supports for the coronavirus-infected global economy, including direct payments to workers and businesses.
— The Jakarta Post

Profiteers cash in on irrationality over COVID-19 face masks
The government’s repeated warnings often go unheeded as irrationality prevails amidst the growing panic over news of the spread of the COVID-19 coronavirus in Indonesia in the past week.
— The Jakarta Post

Persahabatan Hospital Isolates 8 Covid-19 Suspects
Persahabatan General Hospital announced that it has isolated eight people suspected to have been infected by the 2019 coronavirus, also known as Covid-19.
— Tempo.co

Rehab or Prison for ‘No Remorse’ Teen Murderer?
The Indonesian Child Protection Commission, or KPAI, has suggested rehabilitation instead of prison term would be a better course for a teenager who has admitted to killing a child in a gruesome murder case that has shocked the country.
— Jakarta Globe

Suspected COVID-19 patient discharged from Jakarta hospital
A patient has been discharged from Jakarta’s Sulianti Saroso Infectious Disease Hospital (RSPI) after a thorough medical examination confirmed that the patient is healthy and no longer infected with the novel coronavirus disease (COVID-19).
— Antara News

KAI: 30% Train Tickets for Eid Homecoming Sold Out
State-owned railway operator PT KAI stated that per March 10, at least 835,000 tickets for this year’s Eid homecoming or Lebaran had been sold out.
— Tempo.co

Four striking workers killed in car crash at East Java factory gates
Four striking workers at PT Sumber Bening Lestari, the producer of Flow mineral water, have died after a car crashed into a tent in which they were sleeping in front of the company’s gates in Pasuruan, East Java, in the early hours of Tuesday morning.
— The Jakarta Post

South Sumatran farmers learn to manage own forests through government-run program
Edi Susanto of Muara Medak, South Sumatra, can now cultivate a plot of land in the village forest without being afraid of being chased by officers.
— The Jakarta Post

Villages in Indonesia lack skills to manage development funds
Village head Heriyan of Serjiabo, South Sumatra, has a lot on his plate when it comes to administering and managing the village funds.
— The Jakarta Post

Long hard climb: Students clamber over a wall to reach their school in Kupang
A four-meter-tall wall has blocked an access road leading to Petra private Christian elementary school in Alak district, Kupang, East Nusa Tenggara (NTT), forcing students to climb over it on their way to the school.
— The Jakarta Post