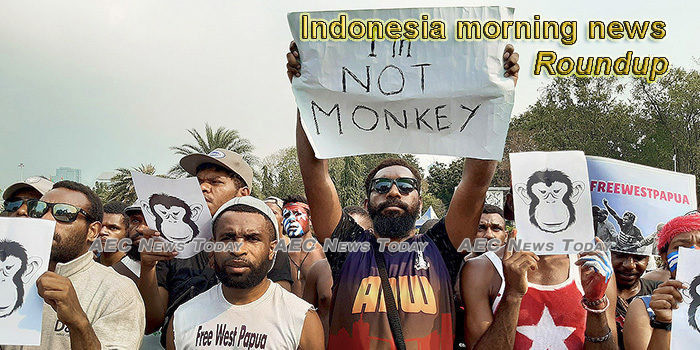 Thousands caught in floods in Indonesia’s sinking capital
Floods that have crippled much of Indonesia’s capital worsened Tuesday, inundating thousands of homes and buildings, including the presidential palace, and paralyzing transport networks, officials and witnesses said.
— Fox News

‘It is not COVID-19’: Indonesian health official mixes up disease and virus
A Health Ministry official said on Monday that the Japanese national who tested positive for the novel coronavirus upon his return from a trip to Indonesia was “not a case of COVID-19”.
— The Jakarta

Still no case reported in Indonesia as COVID-19 reaches Kuwait, Bahrain
Indonesia has reported zero cases of the novel coronavirus as of Monday evening, while Kuwait and Bahrain have confirmed their first cases and two foreigners have been reported to suffer from the disease upon returning from vacations in Bali.
— The Jakarta Post

Indonesian Crew Quarantined in Diamond Princess Voices Concern
An Indonesian national working as a crew for the Diamond Princess cruise ship voiced fear over the quarantine and how it exposes him, and other Indonesians who are not infected, to a higher risk of transmitting the novel coronavirus.
— Tempo.co

Indonesia to focus on manufacturing, tourism and investment to revive the economy
The government will focus on the development of the manufacturing and tourism sectors, as well as attracting more foreign and local investment, in order to revive the country’s economic growth, which has been on a downward trend lately amid growing uncertainty in the global economy, a senior official has said.
— The Jakarta Post

Indonesia hopes to attract $87b investment, create 3m jobs through omnibus bill: Airlangga
The government is upbeat that the sweeping omnibus bill on job creation will bolster investment and open up more jobs for Indonesians, as it braces for tough public scrutiny during the bill’s deliberation at the House of Representatives.
— The Jakarta Post

Floods disrupt teaching, learning activities in Jakarta’s 159 schools
Academic activities at over 150 schools in DKI Jakarta were suspended owing to floods that obstructed access to the schools and their buildings.
— Antara News

Coronavirus outbreak continues to drive rupiah to plunge
Indonesia’s rupiah opened lower by 26 points (0.19 percent) to Rp13,898 against the US dollar, Tuesday morning, in the Jakarta interbank market amid fears of coronavirus outbreak that infected over 30 countries outside mainland China.
— Antara News

BMKG forecasts heavy rains until March in Jakarta, other areas
The Meteorology, Climatology, and Geophysics Agency (BMKG) forecasted continued torrential rainfall and extreme weather in Jakarta and other provinces all through February until March over the Tropical Cyclone Ferdinand, an official stated here on Tuesday.
— Antara News

Omnibus bill makes it easier to start an airline
The omnibus bill on job creation currently being deliberated at the House of Representatives (DPR) proposes some changes to requirements and licensing procedures that will make it easier for investors to enter the aviation business.
— The Jakarta Post

Omnibus bill’s tripartite forum upsets labor unions
As the government is insisting on keeping the provisions in the proposed omnibus bill on job creation on labor rights, another union has decided to leave a tripartite forum set up to support the deliberation process.
— The Jakarta Post

VP hopes regional elections do not disunite people
Vice President Ma’ruf Amin hopes for the 2020 concurrent regional elections to not lead to disunity and conflict among the people due to differences in political choices.
— Antara News

State firm can allocate 9.1m tons of fertilizer
State-owned fertilizer company PT Pupuk Indonesia (Persero) has expressed its readiness to allocate 9.1 million tons of subsidized fertilizer as proposed by the Agriculture Ministry, an increase from the previous 7.9 million tons, for 2020.
— Antara News

What will Indonesia do while on the Human Rights Council?
Helping hands: Foreign Minister Retno Marsudi (center) joins hands with Rakhine State Chief Minister Nyi Pu (third right) and other officials during the presentation of Indonesian aid to Myanmar’s strife-torn Rakhine state in the capital Sittwe in January 2017.
— The Jakarta Post

SoftBank leads $265 million investments in two US-based start-ups
SoftBank on Monday led a new funding round of US$165 million in California-based Karius and invested $100 million in New York-headquartered AI company Behavox, as the technology giant builds a portfolio under its second Vision Fund.
— The Jakarta Post

Indonesia pushes for universality in convention against torture
In between the 43rd United Nations Security Council Session in Geneva, Switzerland, Monday, February 24, Indonesia initiated an event on the sidelines themed the UN’s Human Rights Convention Against Torture Initiative.
— Antara News

Yasonna Laoly Updates 1,276 Ex-ISIS Indonesians in Syria
Law and Human Rights Minister Yasonna Laoly said there are 1,276 Indonesians who left the country to join ISIS in Syria, and 297 of them still have their passports and complete identity documents.
— Tempo.co

Jakarta Flood: KAI Promises Full Refunds for Delays, Cancelation
State train operator PT KAI said the company will fully refund tickets of long-distance trains to passengers whose trips were affected by delays, due to the Jakarta flood this morning.
— Tempo.co

PLN Turns Off 1,612 Substations due to Jakarta Flooding
State-run electricity company PLN is forced to temporarily shut down a total of 1,612 substations affected by flooding in Jakarta, West Java, and Banten.
— Tempo.co

KPAI sets up ethical council after ‘swimming can cause pregnancy’ blunder
The Indonesian Child Protection Commission (KPAI) has formed an ethical council following a controversial statement made by one of its commissioners claiming that women could get pregnant from swimming in the same pool as men.
— The Jakarta Post

Miles away, Indonesian students continue studies, hope to return to Wuhan soon
It has been a week since Diza Laila returned to her family in Medan, North Sumatra, after being repatriated earlier this month from Wuhan, China, where she was studying.
— The Jakarta Post

Police name two more suspects in deadly scout trek that killed 10 students
Police have named two more suspects, identified only as DDS and R, in their investigation of a trek along a river in Sleman, Yogyakarta, that saw 10 students killed in a flash flood.
— The Jakarta Post

Govt Sets Discount of Flight Tickets to Boost Tourism
The government has decided to set a 50 percent discount of flight tickets as the incentive to boost the tourism industry following the recent downturn caused by the coronavirus or Covid-19 outbreak.
— Tempo.co

Indosat Books $113m Profit After Sales of Towers
Indosat, Indonesia’s third-largest telecom company by market capitalization, booked a third annual profit in the past seven years thanks to windfalls last year from the sales of its telecommunication towers, a jump in its cellular business and across-the-board cost-cutting efforts.
— Jakarta Globe