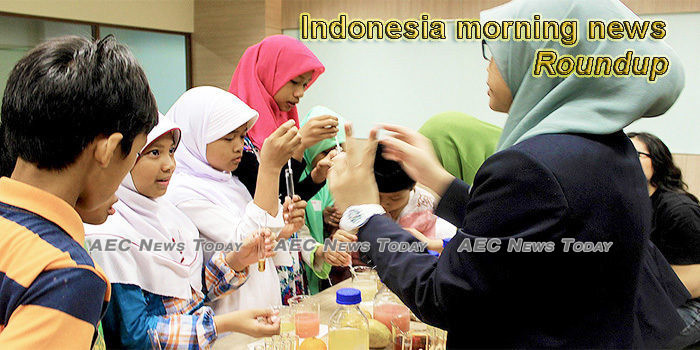 ‘We will trace his movements’: Bali officials respond to report of coronavirus-infected tourist
The Bali Health Agency says it will investigate and verify the information that a Chinese tourist who traveled from Wuhan to Bali last month tested positive for the novel coronavirus that causes the COVID-19 disease on Feb. 5 after he arrived in Huainan city in Anhui province in China.
— The Jakarta Post

Indonesians travelling from S’pore to Indonesia won’t be refused entry
The Indonesian government will not refuse entry to Indonesian citizens returning home to Indonesia from Singapore, the Indonesian embassy in Singapore clarified on Tuesday, Feb. 11, as misinformation has been released stating otherwise.
— Mothership

Indonesia among ‘world’s largest aviation markets’: Boeing
Vietnam, Thailand and Indonesia are in motion to become Southeast Asia’s top three economies in driving future demand for new aircraft, according to one of the world’s top plane manufacturers.
— The Jakarta Post

‘It’s insulting’: Indonesia criticizes US study concerns over no coronavirus cases
Indonesia has criticized a US study questioning why the world’s fourth most populous nation had not yet recorded a case of coronavirus, calling the findings an insult and insisting it was on high alert.
— The Jakarta Post

Indonesia to tackle overloading in 2022: Transport Ministry
To make Indonesia free from over-dimension and overloading (ODOL) in 2022, strict action will be initiated against cargo companies violating dimensions and loading rules, the Transportation Ministry has stated.
— Antara News

Moody’s Warns of Sharp GDP Drops for Commodity Producers as Coronavirus Outbreak Rages On
Indonesia and most commodity-producing countries in the world are facing a potential 0.5 to 1.5 percent cut in their economic growth this year as the fallout from coronavirus outbreak in China continues, rating agency Moody’s Investors Service warned on Tuesday.
— Jakarta Globe

Greenpeace: Jakarta’s Air Quality Is Poor despite in Rainy Season
Greenpeace Indonesia announced that the average air quality of Jakarta throughout January 2020 was in the category of moderate up to unhealthy.
— Tempo.co

Public should not worry over 238 Indonesians returning home: Minister
Indonesia’s government urged people to not harbor concerns over 238 Indonesians to be reunited with families in their provinces of origin after their 14-day quarantine in Natuna, Riau Islands Province, and declared healthy by authorities.
— Antara News

WHO Representative Asserts Indonesia’s Zero Coronavirus Case
The World Health Organization (WHO) representative to Indonesia Dr. Navaratnasamy Paranietharan during his visit today at the University of Indonesia’s Faculty of Public Health (FKM UI) said that Indonesia is well-prepared to respond to cases of coronavirus.
— Tempo.co

Immigration authorities in the Indonesian province of East Nusa Tenggara deported six people of Australian and Dutch nationalities to their countries Wednesday for conducting research without a permit in Rote Ndao District.
— Antara News

Jakarta Govt Promises to Audit Formula E Budget
The Jakarta government has stated that the budget implementation of Formula E will be audited.
— Tempo.co

Not all Chinese workers at Meikarta project illegal, Bekasi official says
The Bekasi administration is looking into allegations of Chinese citizens working illegally at Lippo Group’s Meikarta township project in the West Java regency, after a politician’s comment raised concerns over the issue.
— The Jakarta Post

GBK to Become Alternative Circuit for Jakarta’s Formula E Event
The Gelora Bung Karno Area Management Center (PPK GBK) has prepared the Formula E circuit as an alternative if the National Monument (Monas) area can not be used.
— Tempo.co

Some tourist resorts in Bintan cease operations over corona outbreak
Several tourist resorts and parks in the Lagoi integrated and exclusive tourist area in Bintan Island, Riau Islands Province, have stopped operating in the face of the spread of coronavirus in several countries.
— Antara News

Layers of the Garlic Corruption Scandal
IN early February, garlic supply at Anas Sarnil’s kiosk at the Kramat Jati Market, East Jakarta, shrank. On February 7, only 100 sacks of garlic were piled at the nine-square-meter stall.
— Tempo.co

Zulkifli Reelected PAN Chairman in Chaotic Congress
A National Mandate Party (PAN) politician broke his leg and chairs were thrown to the air during the chaotic party congress on Tuesday that ended with chairman Zulkifli Hasan retaining his post.
— Jakarta Globe

‘It’s what they want’: Blurred pictures of female UNJ students stirs debate on equality
Instagram posts showing blurred photos of female members of a student executive body (BEM) in a state university in Jakarta have stirred debate on social media about gender equality among university students.
— The Jakarta Post

Finally, Catholic appointed as acting head of Catholic affairs directorate-general
After six months of the position being filled by Muslim officials, Religious Affairs Minister Fachrul Razi has named Aloma Sarumaha, a Catholic, as the acting head of the Catholic Community Guidance Directorate General.
— The Jakarta Post

Which Cell? Confused Police Detain Transgender Celeb in Drug Case
West Jakarta Police said they had no idea where to detain transgender celebrity Lucinta Luna, who was arrested for alleged illegal possession of drugs, until they finally decided to put her in an isolated cell at a detention facility for women on Wednesday.
— Jakarta Globe

A Balance of Art: Art Moments Jakarta 2020
After a successful debut in 2019, a premium art fair organized by some of Indonesia’s major art collectors, Art Moments Jakarta, will return this year on Apr. 17 to Apr. 19 at the Sheraton Grand Jakarta Gandaria City Hotel.
— Jakarta Globe