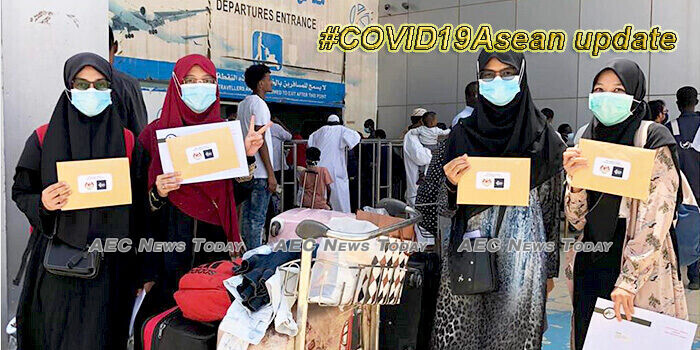 The Philippines yesterday reported 113 deaths to see total fatalities soar to 1,773, while 2,357 new cases saw the active caseload jumped to 41,464, of which 522 are regarded as serious or critical. Following treatment 321 people were declared as recovered.

The active caseload in Singapore yesterday eased down yesterday to 3,795** on the back of 202 new infections and 256** discharges, while nine new cases and five recoveries in Malaysia saw the active caseload there edge up to 96, one of who is said to be serious or critical.

Seven new cases in Thailand among returnees yesterday saw the number of active infections there edge up to 92, one of which is reportedly serious or critical, while one new infection and two recoveries in Myanmar saw the caseload ease to 61.

There were no reports of changes in Brunei, Cambodia, Lao PDR, or Vietnam during the period.

Since the first Asean case of COVID-19 was identified in Thailand on January 12 there has been 210,904 confirmed cases recorded in Asean member countries with 121,729 people, or about 58.27 per cent of all Asean infections, having been treated and discharged.

In the past 24-hours the number of COVID-19 ‘survivors’ throughout Asean increased 1.68 per cent DoD, while deaths increased 2.95 per cent.

There has been 6,005 deaths attributed to COVID-19 in Asean member countries, representing a case mortality rate (CMR) based on completed cases (number of discharged + number of dead) of 4.70 per cent. Based on the total number of Asean infections the regional CMR is 2.87 per cent.

As of today, July 19, some 39.81 per cent of all confirmed COVID-19 infections throughout Asean remain active.

According to the Worldometers tally, China yesterday reported 22 new cases, however, this had been filed after the close-off for July 17 and represent that day’s figures.

In late filings after the close for July 18 China added 16 new case, including 13 community transmissions, to see 251 active infections, with 78,775 reported recoveries and 4,634 deaths. There has been 83,660 COVID-19 cases recorded in China.

The Worldometers tally attributes Mexico with the third most number of COVID-19 deaths globally yesterday, however the 736 new deaths and 7,257 new cases noted were filed after the close-off for July 17 and represent that day’s figures.

The third most number of infections globally during the period were reported in South Africa where 13,285 new cases saw active infections there climb to 163,701, while 144 deaths saw the COVID-19 fatality tally climb to 4,948. There has been 350,879 COVID-19 cases in South Africa of which 182,230 people have reportedly recovered.

The next most number of infections recorded in the previous 24-hours were in Colombia, Russia, Guatemala, Peru, and Argentina, who reported between 3,223 and 8,560 new cases each.

In the past seven days COVID-19 related illnesses have been blamed for the deaths of 35,563 people.

Global COVID-19 overview up to July 19

COVID-19 in Asean: update for March 19 — deaths soar in Indonesia