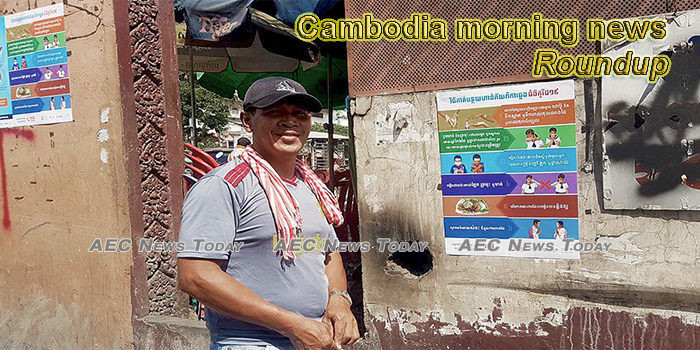 Ministry: More motorists abide by road traffic law
The Ministry of Public Works and Transport said yesterday the number of vehicles that had been checked for defects increased fivefold as traffic police nationwide last week imposed increased fines for traffic violators in accordance with the government’s mission to reduce traffic accidents in the Kingdom.
— Khmer Times

With No Buyers, Phnom Penh’s Waste Pickers Are Helpless
Every evening, Phnom Penh residents can see little flashlights making quick movements around the city’s markets – the beam of light swaying from sidewalk to sidewalk.
— VOA Khmer

GMAC Warns That 200,000 Garment Workers Will Be Suspended
The Garment Manufacturers Association in Cambodia (GMAC) on May 4 urged garment, footwear, and travel goods buyers sourcing from Cambodia to honor their contracts as an estimated 150,000 garment workers have been suspended.
— Cambodianess

WHO warns of second virus wave
The World Health Organization warned yesterday, Cambodia remains at high risk of a second wave outbreak of COVID-19, although Cambodia has achieved a good response to the first phase of the coronavirus.
— Khmer Times

Ministry of Health Finds No New Cases of COVID-19
The Ministry of Health on Tuesday said it had found no new cases of Coronavirus Disease 2019 (COVID-19) and added that only two patients remain hospitalized as of May 5.
— Cambodianess

GMAC demands all payment from buyers
The Garment Manufacturers Association (GMAC) in Cambodia has reiterated an appeal to buyers to source their goods from Cambodia as the economic situation becomes worse with nearly 200 factories suspending their operations because of the COVID-19 pandemic.
— Khmer Times

William Guang Dismissed from Consultative Council
Sok Sovann Vathana Sabung, widely known as William Guang, head of Khmer Rise Party, on Tuesday (May 4) was dismissed as a member of Supreme Council for Consultation and Recommendation, two days after a standoff involving Guang in a national park in Preah Sihanouk province.
— Cambodianess

Lucrative Farming of Australian Lobsters
As Cambodia’s Australian lobster farming is well on track to supply one tonne of the lucrative food product a day to the market, it’s encouraged for expansion in a near future.
— AKP

Aviators gradually resume flights in and out of nation
More regional airlines have begun to slowly reinstate flights to Cambodia’s international airports this month – under strict biosecurity guidelines – as the industry attempts to desperately revive itself from its worst period in aviation history.
— Khmer Times

Customs department lifts ban on face mask exports
The General Department of Customs and Excise has lifted the ban and requirement for permission from the Ministry of Health to export all types of masks.
— The Phnom Penh Post

ANA allows 1,110 home repairs in Angkor
The Aspara National Authority (ANA) permitted 1,110 property owners in the Angkor Archaeological Park area to repair their homes during the first quarter of this year.
— The Phnom Penh Post

Tourism to be reactivated with new guidelines for Kingdom
The Ministry of Tourism plans to introduce new guidelines this month for business health standards for tourism-related businesses such as hotels, restaurants and resorts as the ministry aims to increase domestic tourism.
— Khmer Times

Cyber Security in COVID-19 Crisis Urged to Be Strengthened
In the light of novel coronavirus pandemic imposing challenges to businesses around the globe, strengthening the cyber security has been urged to avoid any cyber security issues at the time when businesses have had to shift workforce from in-office to working from home.
— AKP

Malaysia, Emerging Peanut Market for Cambodia
Malaysia is emerging as a new market of peanut for Cambodia, according to a report of the Ministry of Agriculture, Forestry and Fisheries.
— AKP

Doctors and staff at hotel used for virus treatment to be quarantined
A group of about 30 frontline doctors and medical officers who were in direct contact with COVID-19 patients and about 100 staff of a hotel, which was converted into a quarantine treatment facility in Sihanoukville, were placed under quarantine as the last patient has recovered.
— Khmer Times

No loans from $100 million financing scheme
The governments new $100 million Small and Medium Enterprise Co-Financing Scheme has yet to approve any applications, receiving only some ínquiries pending approval, according to a bank representative.
— Khmer Times

Preah Sihanouk orders removal of booths from tourist beach
The Preah Sihanouk provincial administration has notified merchants selling goods at the beach located in Village 1, Commune III, Sihanoukville, to remove their booths from the coast within 15 days from May 5.
— The Phnom Penh Post

Education programme gives dropouts a second chance
The Ministry of Education, Youth and Sport has trained officials on the implementation of the Basic Education Equivalency Programme (BEEP) and use of UNESCO-sponsored e-learning platforms.
— The Phnom Penh Post

CCF calls for coronavirus relief fund and donations
The social welfare NGO, Cambodian Children’s Fund, which has educated children to lead their families out of poverty since 2004, is confronting financial hardships in the wake of the COVID-19 pandemic.
— Khmer Times

Cambodian Northwestern Provinces to Experience Heat Wave This Week
Northwestern provinces of Cambodia will face a heat wave this week, according to the new forecast shared by the Ministry of Water Resources and Meteorology.
— AKP

Bloo to the rescue: The story behind a very new software
The escalating Coronavirus pandemic has changed the way businesses operate in many countries, including Cambodia. Work from home (WFH) – remote work – is now a common and accepted trend.
— Khmer Times

Traders are stockpiling ivory, rhino horns in SEA
A wildlife Justice Commission (WJC) report said wildlife traders have stockpiled large quantities of ivory in Vietnam, Laos and Cambodia because of difficulties in transporting it to China due to Covid-19 travel restrictions and border closings.
— The Phnom Penh Post

Timber theft is down overall in Prey Lang but perpetrators persist
Officials at the Kampong Thom provincial Department of Environment seized six homemade tractors and more than three cubic metres of logs during a routine operation at three different locations, but the perpetrators escaped.
— The Phnom Penh Post

Destructive corn pest controlled
An official from the Battambang provincial agricultural department said that the Fall Amyworm that destroys corn farms has been controlled by agriculture officials.
— Khmer Times

Fake Cop With Glock Charged With Scam
Police arrested a fake 2-star police officer for taking $ 10,500 from victims under the promise of giving positions in the National Police.
— CNE

Battambang UXO Kills Teen, Injures Three
According to Battambang Provincial Police Office, on 5 May 2020, at 09.20 there was an explosion from a UXO which left one person killed and three others seriously injured in Ou Chrov point, Thmey village, Takhmout commune, Samlot district, Battambang province.
— CNE

Fire kills children, destroys property
Two children were killed in an early morning blaze on Tuesday when petrol poured into a bottle from its 30l container spilt onto a burning candle in their home in O’Chum commune, O’Chum district, Ratanakkiri province.
— The Phnom Penh Post