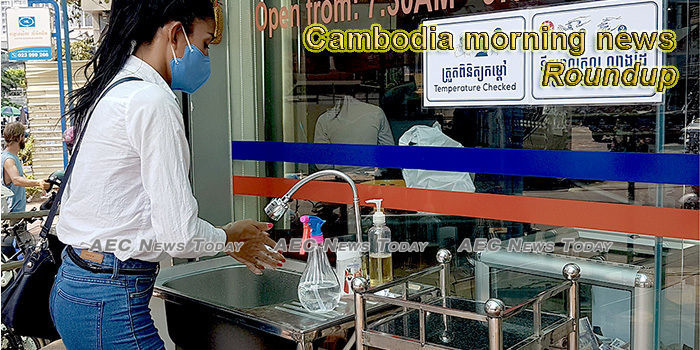 Prime Minister Hints at Declaring State of Emergency; Criticizes Price Gouging
Prime Minister Hun Sen said Wednesday he was considering the possibility of declaring a state of emergency, though he said it in the middle of an irate speech criticizing price gouging.
— VOA Khmer

‘Overstay’ charges might be waived
Sok Phal, Secretary of State at the Interior Ministry, has exclusively told Khmer Times that he is seeking approval from the Minster of the Interior Sar Kheng to waive overstay fines for tourists stranded in the country due to the ongoing severe disruption to flights caused by COVID-19.
— Khmer Times

Online Tourist Accommodation Log Launched to Prevent Covid-19 Spread
Ministry of Tourism launches an online system of tourist accommodation management for all hotels and guesthouses to better prevent the epidemic of Covid-19.
— AKP

Beer gardens ordered to be shuttered to stem COVID-19
The Tourism Ministry yesterday issued a directive for the indefinite closure of beer gardens across the Kingdom in a bid to quell rising COVID-19 figures.
— Khmer Times

More than 170 Chinese tourists quarantined in Bavet city
Svay Rieng Provincial Health Department has quarantined 174 Chinese nationals to ensure they are not infected with COVID-19 upon their arrival in Bavet city last night, an official said.
— Khmer Times

Interior Minister: Over 40,000 Cambodian Workers in Thailand Repatriate as of 26 March
Cambodian Minister of Interior Sar Kheng said that from 22-26 March 2020, approximately 40,000 workers repatriated from Thailand after learning that the host country announced to close borders.
— Fresh News

Cambodia’s aviation sector hard hit by Coronavirus pandemic
Cambodia has recorded a staggering 40 percent decline in flights coming in or going out due to COVID-19.
— Khmer Times

Japan requested to recruit 100,000 for skilled workforce
Minister of Labour and Vocational Training, Ith Sam Heng, has asked Japan to increase the number of Cambodian workers to 100,000 in future as it plans to recruit 30,000 skilled workers in building maintenance alone.
— The Phnom Penh Post

Mine Exploration Licences Open for Public Bidding
Ministry of Mines and Energy announced to open for applications for public bidding on mine exploration licences in four areas in three provinces.
— AKP

Mysterious century-old structure found at bottom of Angkor pond
The Apsara National Authority (ANA) has discovered a mysterious 1,000-year-old structure of a wooden building at the bottom of a pond after the Angkor Wat temple’s conservation team completed restoring its northern cave.
— The Phnom Penh Post

Struggling textile industry gets reprieve with new tax breaks
The government has decided to waive 50 per cent to 100 per cent tax on the textile industry for six months as a means of easing its financial burden, stated a Ministry of Economy and Finance prakas.
— The Phnom Penh Post

Cambodia-Indonesia trade rise to record high in 2019
Bilateral trade between Cambodia and Indonesia jumped 46 per cent to a record high of more than $792 million last year, from $543 million in 2018, the Ministry of Commerce said.
— The Phnom Penh Post

Two inmates ask Supreme Court to have their convictions overturned
Two people sentenced to 14 years in prison each for killing a barmaid during an argument in Banteay Meanchey province in August 2016 are at the Supreme Court appealing to be released from prison.
— Khmer Times

Former CNRP activist nabbed for offering online English classes
Authorities detained a high school teacher in Kampong Chhnang province on Thursday after he was caught conducting online classes despite the fact that schools had been ordered to close temporarily to prevent Covid-19 infections.
— The Phnom Penh Post

Soldiers, residents trade blame over illegal logging in Mondulkiri
INDIGENOUS people in Mondulkiri province plan to file a complaint with the provincial court against a military officer from the Army Base “K1” in O’Raing district’s Dak Dam commune, for clearing forest land for personal ownership within the Phnom Nam Lear Wildlife Sanctuary.
— The Phnom Penh Post