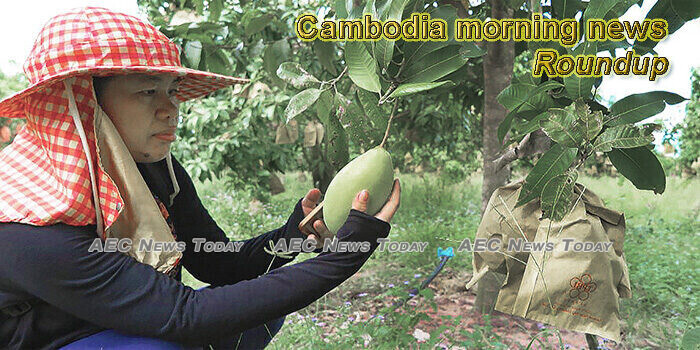 Pakistan to relocate lonely elephant to Cambodia sanctuary
A Pakistani court approved the relocation of a lonely and mistreated elephant to Cambodia on Saturday after the pachyderm became the subject of a high-profile rights campaign backed by music star Cher.
— The Jakarta Post

High alert for Covid-19 as students return from abroad
Cambodian students are returning from abroad in increasing numbers to government testing and quarantines that are awaiting them upon arrival.
— The Phnom Penh Post

The World According to Cambodia’s CPP
On August 12, the European Union will finally follow through on its threat to impose a suspension of trade preferences on Cambodia.
— The Diplomat

COVID-19: Three More Patients Recovered; Remaining Active Cases 35
Three more patients of the novel coronavirus (COVID-19) have been cured, announced the Ministry of Health in a press release made public this morning.
— AKP

Ministry of Health issues measures for upcoming holiday
Ministry of Health today issued a statement with guidelines that the public has to follow to prevent the spread of the coronavirus during the substitute holidays to be held in August.
— Khmer Times

Cambodia Collects US$2.95 billion as Fiscal Revenue in First Half of 2020
The Royal Government of Cambodia collected US$2,956 million as revenue from all sources of taxes, a slight decrease of 0.7 percent compared to the same period last year.
— AKP

The U.S. Woman who Flew the COVID-19 Quarantine Facility in Phnom Penh Has Been Found
The authorities have placed a woman under 14-day quarantine in a hotel in Kampong Cham City after locating her following her escape from a Phnom Penh quarantine facility where she was meant to stay after her arrival from the United States on July 15.
— Cambodianess

Gov’t Statistics Show Mekong Water Levels Are Precariously Low
Government data released on July 17 showed water levels in the Mekong River are lower than at this time last year, on account of poor rainfall along the mainstream in Cambodia, with others pointing to hydropower dams in China and Laos.
— VOA Khmer

Cambodia’s Dog Meat Ban: What Can We All Do Next to Help?
Siem Reap Province’s pledge to ban all kind of dog meat trade last week on July 8 earned acclaim both internationally and domestically.
— Cambodianess

Over 310,000 Domestic Tourists Travel in First Two Weeks of July
A total of 313,300 domestic tourists visited different tourist attractions across Cambodia in the first two weeks of July 2020.
— AKP

New expressway, Capital to Bavet city
The Cambodian government has plans to build an expressway from Phnom Penh to Svay Rieng province’s Bavet city, said the Office of the Council of Ministers in a statement released today.
— Khmer Times

Cambodian Customs Collects Almost US$1.3 Billion in First Semester
The General Department of Customs and Excise (GDCE) of the Ministry of Economy and Finance earned in total over 5,152.6 billion Riel or US$1,272.2 million in the first half of this year, down 16.2 percent compared to the same period last year.
— AKP

World Banks Approves a US$100 Million Project for Cambodia
The World Bank’s Board of Executive Directors today approved a US$100 million credit from the International Development Association (IDA) for the Cambodia Road Connectivity Improvement Project.
— AKP

Sokha on local tour, stays out of politics
Former Cambodia National Rescue Party (CNRP) leader Kem Sokha is touring the Kingdom to pay his respects to fallen heroes and learn about the effects of Covid-19 on farmers and the tourism sector, one of his lawyers said.
— The Phnom Penh Post

Prey Veng’s potential as a Wetland Zone mulled as Protected Natural Area
The Ministry of Environment is planning to include parts of a potential multi-purpose wetland area locally called “Boeungsne-Tuolporn Talei” in Prey Veng province as a protected natural area.
— Khmer Times

Keeping COVID-19 ‘locked out’: Overcrowding a major concern
The Interior Ministry’s General Department of Prisons said yesterday it has been successful in preventing COVID-19 from spreading to inmates, although overcrowding remains a concern.
— Khmer Times

Pursat Police Pull Up Hidden Plantation
A marijuana crop grown on around 2 hectares was raided and burned by Veal Veng District Police in cooperation with District Military Police in Pursat Province.
— CNE

Chinese Man In Court After Slashing Hotel Staff With Blade (Video)
According to the report, Mr. Kuch Kimlong, the spokesman of the Phnom Penh Municipal Court, said that a Chinese man used a weapon to chase a Cambodian security guard in a hotel, causing serious injuries because he was angry. On the morning of July 19, 2020, Deputy Prosecutor Sok Keo Bandith decided charge the man with intentional violence with aggravated circumstances.
— CNE

Prostitution scheme busted in P Sihanouk
Preah Sihanouk police sent four Chinese men and a Russian woman to the provincial court on Sunday after detaining them on Thursday at a guesthouse for involvement in a prostitution case in Mittapheap district’s Commune II.
— The Phnom Penh Post

Chinese Man Arrested With Firearm
A Chinese man was arrested by the O’Beak Kam Police Station for illegally carrying a weapon in Phnom Penh.
— CNE