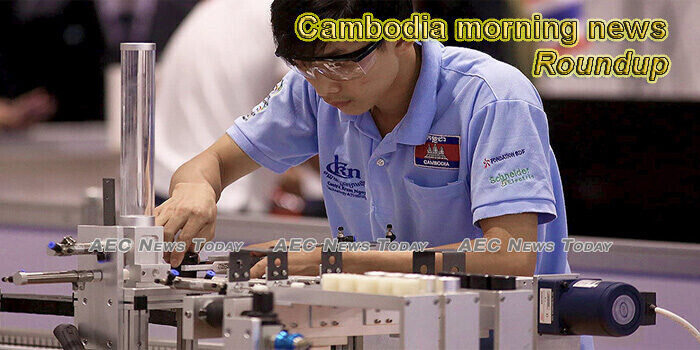 Gov’t: ‘Immigration Campaign’ To Stop Anti-Ethnic Vietnamese ‘Nationalism’
The Cambodian Interior Ministry said its handling of immigration issues, especially with ethnic Vietnamese minority groups in the country, was an attempt to stifle “nationalistic politics” used by the opposition to target the government.
— VOA Khmer

Cambodia to Sign FTA with China to Boost Agro Exports, Potentially Offset EBA Losses
Prime Minister Hun Sen is scheduled to be in Beijing on August 12 to sign a free trade agreement with his Chinese counterpart. The new agreement is expected to usher in an enhanced level of economic cooperation between the two countries, deemed especially important to Cambodia.
— VOA Khmer

Cambodian People to Be Compensated with Five-day Holiday in 3rd Week of August
Cambodian people are going to get their Khmer New Year Holiday back in the third week of next month.
— AKP

Resolution calls for indemnity pay continues
Twenty-two representatives from unions in the garment and footwear, construction, tourism and entertainment service sectors on Monday gathered in front of Prime Minister Hun Sen’s residence to send a petition to the premier, seeking for his intervention regarding indemnity payments.
— Khmer Times

Government Collects US$1.6 billion in Tax Revenue
General Department of Taxation (GDT) collected 6,820.48 billion Riel (approximately US$1,684 million) in tax revenue in the first semester of this year, a 12 percent increase compared to the same period last year.
— AKP

Cambodian accused of compatriot’s murder on fishing boat
A Cambodian crewman is accused of murdering a fellow national on a fishing boat off the southern province of Nakhon Si Thammarat in the Gulf of Thailand.
— The Thaiger

Australians in Cambodia have returning flights cut
The Australian government has announced it will cut the total number of inbound flights by almost half as health officials scramble to suppress a resurgence of COVID-19 infections.
— Khmer Times

Thais let Cambodians remove goods from border market
Thai provincial authorities have agreed to allow Cambodian traders from Banteay Meanchey province’s Poipet city to reenter the Rong Kluea market in Thailand to remove their belongings left behind after the borders between the two countries were closed over COVID-19 fears.
— Khmer Times

PP squatters set to relocate
Nearly 100 families living on a public sidewalk in Boeung Keng Kang district’s Tomnop Teuk commune in Phnom Penh were recently given plots of land by the government in Khasch Kandal district’s Vihear Suor commune in Kandal province to encourage them to move.
— The Phnom Penh Post

Interior Ministry sees a danger to Kingdom: Illegal migrants ‘are a security risk’
The Ministry of Interior has branded illegal migrants in the Kingdom as being a “risk to national security” and is cracking down on them following years of inaction due to “political considerations”.
— Khmer Times

Residents told to seek medical care for dengue
Ratanakkiri provincial governor Thong Savon has called on residents not to believe in superstition and instead seek treatment at health centres if they believe they have contracted dengue fever.
— The Phnom Penh Post

Bastille Day spirit in aiding Cambodia to fight Covid
As COVID-19 continues to threaten the lives of the people around the world with more than 12 million infected and more than half a million deaths around the globe, France, which is one of the major donor countries to Cambodia, is also hit by the unprecedented coronavirus spread.
— Khmer Times

Kingdom, VN vow $7B in trade
Cambodia and Vietnam have pledged to lift up bilateral trade to $7 billion this year by facilitating cross-border shipments amid tightened measures at border checkpoints to prevent the outbreak of the Covid-19 disease.
— The Phnom Penh Post

Koh Kong villagers trade logging for agriculture
Over 200 families living in Koh Kong province’s Sovanna Green Village Community who used to log timber and hunt wild animals for a living have now turned to agriculture to sustain themselves.
— The Phnom Penh Post

Old CNRP office will stay shut, court says
The Phnom Penh Appeal Court on Monday ruled that it will not give a former Cambodia National Rescue Party (CNRP) office back to its current owners, the Candlelight Party, due to its connection to complicated crimes.
— The Phnom Penh Post

Rattanakiri Province Has 14 Tourism Destinations
Rattanakiri, a mountainous northeastern province of Cambodia, is well-known for its stunning natural beauty and ethnic diversity.
— AKP

Ratanakkiri police seize timber, build court cases
Ratanakkiri provincial police have handed over a mix of 33 pieces of timber to provincial environmental officials as evidence to build a court case after they were seized in O’Yadav district.
— The Phnom Penh Post

Wildlife Alliance lauded for patrols
The Ministry of Environment highly values the efforts of the Wildlife Alliance in helping Cambodia to protect its environment and natural resources in the Cardamom Mountains, which cover 1.4 million hectares in Koh Kong, Pursat and Kampong Speu provinces.
— The Phnom Penh Post

Seahorse’s Vulnerability Voiced
Conservationists have urged for more engagement of fishing communities to protect seahorse, as over half of its population has declined so far.
— AKP

Marking 70 years of fluid but constructive Cambodia-US ties
The Kingdom and the US have highlighted their long history of diplomatic relations which have gone through “ups and downs” and voiced optimism for good cooperation.
— Khmer Times

Forest activist ‘beaten’ at forum
A forestry activist has claimed that he was physically attacked and injured at a public forum organised by Lumphat district authorities on July 8 and is now receiving medical treatment in Phnom Penh.
— The Phnom Penh Post

Scavenger Arrested Over Wife’s Murder
A man suspected of killing his wife and escaped for 2 days has been arrested by the specialized force of Meanchey District Police Inspectorate in cooperation with Stung Meanchey 1 Administrative Police Force at 11 o’clock In the morning of July 13, 2020 at Trea village, Sangkat Stung Meanchey I, Khan Meanchey.
— CNE

Man On Drugs Burns House, Assaults Fire Chief
A young man set fire to his house and lay down in the middle of the road, preventing the fire truck from entering to put out the fire. When a fire chief attempted to move him away, the suspect then hit him with a belt on the sub, causing head injuries. The suspect was detained by the authorities.
— CNE