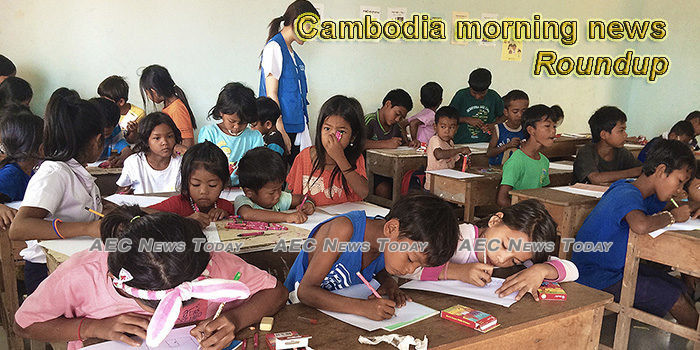 Gov’t takes steps to lower logistics, transport costs
With the threat of losing trade privileges in the EU drawing closer, the government is taking measures to reduce logistics and transportation costs to safeguard the Kingdom’s competitiveness.
— The Phnom Penh Post

CHRC and Kingdom’s mission to UN blast comments on Sokha trial
The Cambodian Human Rights Committee and Cambodia’s Permanent Mission to the UN headquarters in Geneva have blasted comments made by three Special Rapporteurs about the ongoing trial of former CNRP leader Kem Sokha.
— Khmer Times

Khmer Rouge Victims Welcome Preservation of Textiles At Tuol Sleng Museum
Khmer Rouge victims from the S-21 prison in Phnom Penh said last week they were appreciative of efforts to restore and preserve textiles and clothing belonging to victims detained at the notorious site.
— VOA

Stop order but fulling of Kampot mangrove swamp continues
Despite a stop order issued to a prominent businessman, the mangrove forests, a vital source of the province Kampot eco system is again under threat as land fill has started again.
— Khmer Times

Drunk Military Officer Fires At Sky
Police took a drunken military officer in for questioning after shots were fired in Dangkor.
— CNE

Cambodian International Airports Expect More Growth This Year
The three international airports in Cambodia are expected to serve more passengers this year, but at a slower pace, pointed out a news release of Cambodia Airports AKP received this morning.
— AKP

Visit of Defence Attache from US Embassy to Ream Naval base shrouded in mystery
The visit of the U.S. Defense Attache, Colonel Marcus Ferrara, seconded to the U.S. Embassy in Phnom Penh to the Ream Naval Base on 13th January has raised more questions than answers.
— Khmer Times

Baby Elephant Found Dead
An elephant was found on January 17 at the Phnom Prich Wildlife Sanctuary after becoming separated from its herd.
— Thmey Thmey

Cambodia, Vietnam Vow to Continue Combating All Forms of Cross-border Offences
The Kingdom of Cambodia and the Socialist Republic of Vietnam have been committed to continue taking strict measures to prevent and crack down on all forms of offences, particularly drug and forest offences along the common border.
— AKP

Ups and downs of tourism industry
The local tourism sector has shown steady growth in the last few years due, in no small part, to the soaring number of Chinese choosing the Kingdom as a holiday destination.
— The Phnom Penh Post

Fatal Bokor Mountain Stabbing sees 7 suspects arrested
What was supposed to be a night of merry making at the Monivong Bokor National Park turned to tragedy when an argument amongst two group of men led to the fatal stabbing of one.
— Khmer Times

PASSENGER NUMBERS ON THE RISE AT CAMBODIA’S AIRPORTS
A total of 11.6 million passengers passed through the airports last year as Phnom Penh handled a record six million passengers (+11.2%) and Sihanoukville 1.6 million (+158%), although traffic at Siem Reap dipped by 12.3% to 3.9 million.
— Airport World

Bankrupt hotel workers strike
Around 100 former employees of the Great Duke hotel which closed on December 31 were on strike Monday for wage seniority and other benefits.
— Thmey Thmey

3 Youths Caught With 4 Dead Porcupines
Four porcupines were killed, and three juveniles were caught by police trying to sell them.
— CNE

UNDP set to address Kingdom’s challenges
In a bid to find solutions to the world’s biggest challenges, the UN Development Programme (UNDP) on Monday launched the Accelerator Labs in Cambodia.
— The Phnom Penh Post

Displaced Otres vendors protest
More than 50 vendors from Otres beach in Sihanoukville on Monday protested outside Prime Minister Hun Sen’s house in the capital, seeking a solution and compensation after their stalls were dismantled by provincial authorities.
— The Phnom Penh Post

Ministry: Work on National Road 3 nearly halfway done
The restoration of National Road 3, linking Phnom Penh and Kampot on the coast, is 45 per cent complete, the Ministry of Public Works and Transport said.
— The Phnom Penh Post

Kep Gardens Association: Planting seeds of knowledge in Cambodia
Australian couple Andrew and Janine Judd came to Cambodia on holiday in 2006. Knowing the long history of violence and poverty the country had experienced, the couple did not expect to be greeted with an outpouring of hospitality and kindness. Yet that was exactly what they received.
— The Phnom Penh Post

Cambodia morning news for May 13