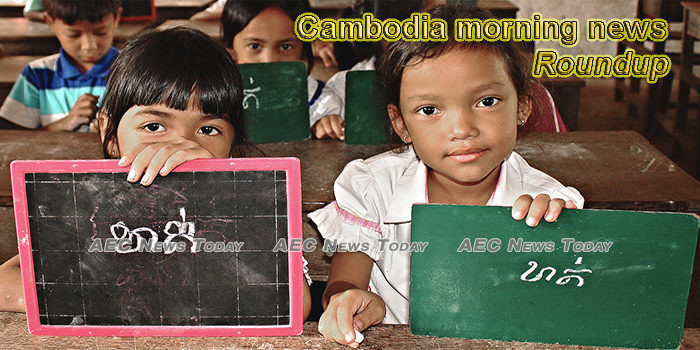 PM Hun Sen Thanks Thailand, Indonesia, and Japan for Updating Status of Westerdam Passengers (Video inside)
Cambodian Prime Minister Hun Sen thanked Thailand, Indonesia, and Japan for announcing that their citizens, who were passengers of Westerdam cruise ship docking in Cambodia, were tested “negative” of Covid-19.
— Fresh News

Imports down over Covid-19
Shipments of goods between the Kingdom and China are declining amid the Covid-19 outbreak, according to local logistics experts.
— The Phnom Penh Post

Cambodia Sends 68,040 Workers Abroad in 2019
Scores of 68,040 Cambodians were dispatched to work abroad in 2019, bringing the total number of Cambodian workers abroad to 1.2 million, according to a report from the Ministry of Labour and Vocational Training.
— AKP

Agriculture Ministry Curbing H5N1 Outbreak into the Kingdom
Ministry of Agriculture, Forestry and Fisheries has called for the prevention of possible spread of H5N1 bird flu outbreak in Vietnam to the Kingdom.
— AKP

Westerdam Ship and Crew to Depart Cambodia on 22 February
Senior official of Sihanoukville port said on Thursday that the Westerdam cruise ship and its 747 crew will depart the port on 22 February 2020.
— Fresh News

Couple sent to court over secret sex services at their restaurant
The Interior Minister’s Anti-Human Trafficking and Juvenile Protection Department on Thursday questioned a married couple before sending them to the Phnom Penh Municipal court.
— The Phnom Penh Post

COVID-19: WHO Releases Clear Cooperation on Westerdam Cruise Ship Case
The World Health Organisation (WHO) is working closely with the Ministry of Health (MOH), the Royal Government of Cambodia and technical partners, including the US Centres for Disease Control and Prevention (US CDC) and Institute Pasteur Cambodia, to support the public health response to the Holland America MS Westerdam cruise ship event in the context of the coronavirus disease 2019 (COVID-19) outbreak.
— AKP

Why the EU’s New Cambodia Wrist Slap Won’t Weaken Hun Sen’s Iron Grip
Though the move is not entirely insignificant, it pales in comparison to the other challenges the government faces and is working to address.
— The Diplomat

Thailand, Cambodia launch cross-border QR payments
BOT (Bank of Thailand) and NBC (National Bank of Cambodia) have jointly announced the launch of a QR code-based retail payments link between the two Southeast Asian countries, according to Regulation Asia.
— The Paypers

Another 5G Pilot Trial Conducted Successfully
Yes Seatel, one of the telecom companies in Cambodia, has conducted successfully the pilot trial of the latest generation wireless technology for digital cellular network – 5G.
— AKP

Lango critics not legally registered
Minister of Interior Sar Kheng has denounced the group of 100 NGOs and associations that called for the Law on Associations and Non-Governmental Organisations (Lango) to be repealed as between 70 and 80 per cent of them are not even legally registered.
— The Phnom Penh Post

Sar Kheng slams land grab episode
Minister of Interior Sar Kheng slammed a provincial council member over a recent state land cut of 1,000ha in Banteay Meanchey province, declaring that the council did not have the right to do so.
— The Phnom Penh Post

Council scrutinises results of the 2019 national census
The Supreme Council for Consultation on Wednesday began questioning Minister of Planning Chhay Than over alleged irregularities in the 2019 census.
— The Phnom Penh Post

Rubber exports increase 17%
Cambodia exported 27,445 tonnes of rubber worth $40 million in the first month of the year, up 17 per cent compared to the same period last year, Ministry of Agriculture, Forestry and Fisheries official Khuon Phalla told The Post on Thursday.
— The Phnom Penh Post

Ministry reports increase in human trafficking cases
The Interior Ministry in their annual report said law enforcement agents cracked down on 163 human trafficking and sexual exploitation cases last year, an increase of 29 when compared to the same period in 2018.
— Khmer Times

Ministry calls for crackdown on pesticide-laced fruit and veggie imports
The Agriculture Ministry has requested the Interior Ministry and the Ministry of Economy and Finance to intervene and prevent the import of fruits and vegetables that contain pesticides into Cambodia, to improve food safety and increase local cultivation.
— Khmer Times

Health Ministry acts on medication past expiry dates
The Ministry of Health and its partner organisations yesterday launched the “Community Mobilisation Initiatives to end Tuberculosis ” project and called on people to stop the distribution of expired pharmaceutical drugs, especially drugs used to combat tuberculosis.
— Khmer Times

Hun Many hails Kingdom’s exceptional recovery
Hun Many, a National Assembly member, yesterday highlighted the Kingdom’s remarkable progress from toppling the Khmer Rouge regime to being a peaceful and developing country.
— Khmer Times

Demand for urgent measures to increase tourist numbers
Because of the global tourism market slowdown caused by the Novel Coronavirus Covid-19 and its impact on Cambodia, the Pacific Asia Travel Association Cambodia Chapter (PATACC), which represents about 135 members across the country, has submitted a letter to the government requesting urgent measures.
— Khmer Times

Golden children grow their own vegetables
This weekend sees the participation of 25 youths from Sovann Komar children’s village in a mission to expand a garden and cultivate their own organic vegetables.
— Khmer Times

Billions of dollars set to boost visitor attractions in Kingdom
The government has announced that it is preparing to develop a special tourism area in the coastal province of Sihanoukville. In a move to diversify its tourism offerings, citing a need to boost tourism flow into the area.
— Khmer Times

Amelia Bambridge’s brother speaks about her death
The brother of British backpacker, Amelia Bambridge, who drowned after disappearing from a beach party in Cambodia, has spoken of his heartbreak after discovering pictures of her dead body online.
— Khmer Times

Aussie missionary on bail in Cambodia continues with his gospel work
Australian missionary Martin Chan is back in his Cambodian home with his wife Deborah Kim. It’s been 12 days since he was granted bail from the cramped prison outside the capital of Phnom Penh where he spent the past three months.
— Khmer Times

Report: some Cambodia casinos defying online gambling ban
Rumors of the demise of Cambodia’s online gambling sector may have proven slightly exaggerated, at least, if certain media reports are to be believed.
— CalvinAyre

Illegal logging report disputed in K Speu
Civil society organisation ACNCIPO director Chea Hean said on Thursday that he has discovered a resurgence of large-scale logging within areas of the South Cardamom Mountains in Kampong Speu province’s Oral district, a claim shot down by authorities.
— The Phnom Penh Post

Army recruits set to begin training
A total of 2,476 candidates have been selected to become army recruits after having passed the recent examinations, with 80 per cent of them being children of working soldiers.
— The Phnom Penh Post

NGO staff in court for RCAF plate abuse
Ten staff of the NGO Wildlife and Fishery Protection and Preservation were sent to court on Thursday for using Royal Cambodia Armed Forces (RCAF) number plates, and using their positions to threaten people.
— The Phnom Penh Post