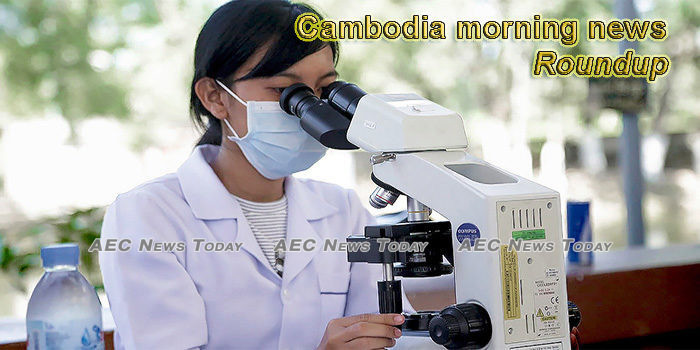 EU Partially Suspends Trade Privileges, Selected Garments And Footwear To Be Tariffed
The European Union Commission announced on Wednesday that it will suspend trade privileges on certain products exported from Cambodia to the economic bloc, affecting more than $1 billion in exports and partially imposing tariffs on selected garment and footwear exports.
— VOA Khmer

Pariah ship heads to Cambodia, deaths hit 1,115: Virus update
The impact of the coronavirus continues to spread, as Japan found new infections on a cruise ship while a major bank in Singapore evacuated 300 employees from an office floor after a worker tested positive.
— Bangkok Post

Cambodia will not give in to EU trade preferences
Cambodia’s strongman leader Hun Sen said Tuesday his country would not “bow its head” to the European Union (EU) as the bloc prepares to decide whether to cancel trade benefits to the kingdom over its human rights record.
— The ASEAN Post

Japan to Further Support for Cambodia
Japan will continue its support for Cambodia in different sectors, including mine clearance and organisation of Asia-Europe Summit this year and ASEAN Summit in 2022.
— AKP

Cambodian NA Satisfied with Cambodia-Cuba Cooperation
The National Assembly (NA) of Cambodia is satisfied with the good cooperation between the Governments of Cambodia and Cuba, which have brought about benefits to both sides through the exchange of visits and mutual support on international arena.
— AKP

Cambodia spared after scare, people should not panic as death toll mounts at epicentre
Ly Sovann, spokesman for the Ministry of Health told local media that a Dutch patient’s test results for coronavirus have come back negative.
— Khmer Times

Cambodia’s Schools, Students and Teachers in Numbers
Cambodia has a total of 14,522 kindergartens, primary and high schools – about 13,300 of them are state-run.
— AKP

Smoke-Free Environment in Tourism Sector Boosted
Ministry of Tourism has called on business owners in tourism sector to cooperate in making the country a smoke-free zone.
— AKP

Taking the Khmer Rouge tragedy and turning it into music
When actor Joe Ngo was growing up, his parents would tell him stories about their time as labor camp prisoners under the Khmer Rouge regime.
— Khmer Times

Citizens encouraged to raise concerns in public forums
The Senior Minister in charge of the government’s special mission on landmines, UXO and engineering, Meas Sophea, on Tuesday encouraged people to provide input and constructive criticism in public forums without fear.
— The Phnom Penh Post

Journos trained in code of ethics
The Ministry of Information on Wednesday held a full-day training workshop to strengthen the sense of professionalism among journalists.
— The Phnom Penh Post

UNHCR lauds Cambodia’s work supporting refugees
The UN High Commission for Refugees (UNHCR) on Tuesday reiterated its commitment to supporting Cambodia in the protection of refugees and asylum seekers.
— The Phnom Penh Post

Working group created to halt virus spread
Despite not having any new cases in the Kingdom, the Ministry of Health has formed a working group dedicated to stopping the spread of the new coronavirus.
— The Phnom Penh Post

TCBC Celebrated 70 Years of Thailand-Cambodia Diplomatic Relations.
To Focus on Commercial Strength and Bilateral Investment for the Growth of CLMV Economy
— Bangkok Post

Canadian lawyer flees child sex claims to teach in Cambodia
When disgraced Ottawa lawyer J.D. Coon fled the country as a child-sex fugitive in December 2013, he went to Cambodia to teach at a children’s school.
— Khmer Times

Sub-decree to raise fines for traffic rules violations
With this year being designated a critical one in the fight to reduce road casualties, specialists from the National Road Safety Committee are drafting a new sub-decree to punish those that break traffic rules.
— The Phnom Penh Post

Convicted murderer seeks reduction of sentence
A 28-year-old convicted rapist-cum-murderer asked the Appeal Court on Wednesday to reduce his life sentence meted out by the provincial court.
— The Phnom Penh Post

Stolen Buffalo Shot After Cop Gored
One of four male buffalo bulls was shot dead after a police officer was injured while cracking down on their theft.
— CNE