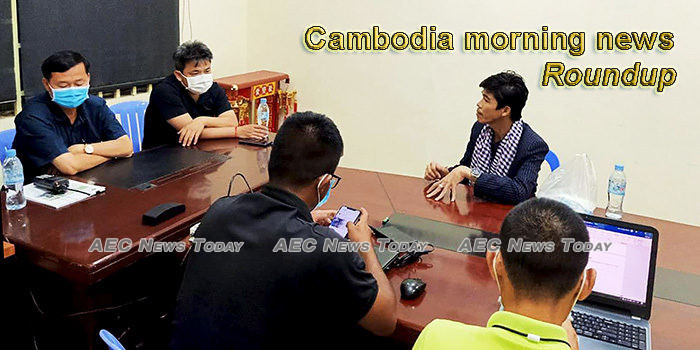 Covid-19 at ‘alarming rate’, health ministry says
The Covid-19 risk level for individual transmission is at an “alarming rate” in the Kingdom and its probability is “not low”, warned Health Ministry spokesperson Or Vandine.
— The Phnom Penh Post

Zero New Cases Reported for 15th Day in Cambodia as Caution Still Urged
The Cambodian Ministry of Health said Monday there were no new cases of the novel coronavirus, marking the 15th day without an infection, with health officials warning against complacency and calling the situation “alarming.”
— VOA Khmer

Cambodia’s Export to Thailand Up 115% in Q1
Cambodia’s export to Thailand has seen a significant increase in the first three months of this year, although the two countries have faced strict movement of cross-border trade due to the deadly COVID-19 pandemic.
— AKP

Health Ministry and WHO: COVID-19 Pandemic is Not Over for Cambodia
In their weekly press briefing, the Ministry of Health on Monday morning confirmed that Cambodia had once again detected no new cases of Coronavirus Disease 2019 (COVID-19) and that two more patients had recovered from the virus.
— Cambodianess

NBC: Drop loan fees, cancel fines for debtors
In a recent announcement, the National Bank of Cambodia (NBC) requested banks and financial institutions to reduce loan-related fees and cancel fines for borrowers for the rest of the year as the Kingdom battles the Covid-19 pandemic.
— The Phnom Penh Post

Nearly 10,000 Garment Workers Suspended Over COVID-19 Impact
Spokesman for the Ministry of Labour and Vocational Training Heng Sour said on Monday that nearly 10,000 garments workers have lost jobs and wages due to the temporary closure of around 130 garment factories.
— Cambodianess

Kol: Political will needed to fight ‘graft’ in the Kingdom
Before former Transparency International Cambodia (TI Cambodia) executive director Preap Kol stepped down earlier this month, he delivered a 17-minute speech sharing his views on the fight against corruption in the Kingdom.
— The Phnom Penh Post

US training for rangers postponed
The Ministry of Environment said a standardised training programme for Cambodian rangers in collaboration with the US Department of State, US Agency for International Development (USAID) and the US Forest Service (USFS) has been postponed amid the Covid-19 pandemic.
— The Phnom Penh Post

Cambodian Minister of Health Reminds Citizens to Be Vigilant of Covid-19 despite High Recovery Rate
Minister of Health Mam Bunheng share three recommendations to combat Covid-19, according to the press release issued by the Ministry of Health that the Fresh News received on Monday.
— Fresh News

CDC approves 10 more investment projects in April
The Council for the Development of Cambodia (CDC) issued final registration certificates to 10 new investment projects that are worth more than $40.28 million and expected to generate 5,602 jobs. All 10 were certified from April 20-24.
— The Phnom Penh Post

Government makes push for organic veggies
The government introduced an organic agriculture policy to boost production and export, according to a prakas from the Ministry of Agriculture, Forestry and Fisheries on Sunday.
— The Phnom Penh Post

More 620-megawatt to Be Added to Grid This Year
At least 620-megawatt generated from local power sources are in the government’s plan to be added to the grid this year, increasing the power supplies in the Kingdom to 4,000 megawatts.
— AKP

British Man Dies In Kampot
On April 27, 2020, a 60-year-old British man, ROBERT PAUL CADDY, was found dead in a guesthouse in Kampot.
— CNE

‘Jealous’ major held for killing wife
A military officer was sent to the Phnom Penh municipal Military Police for questioning on Monday after “accidentally” shooting his wife to death in Meanchey district’s Chak Angre Krom commune and fleeing to neighbouring Kandal province.
— The Phnom Penh Post