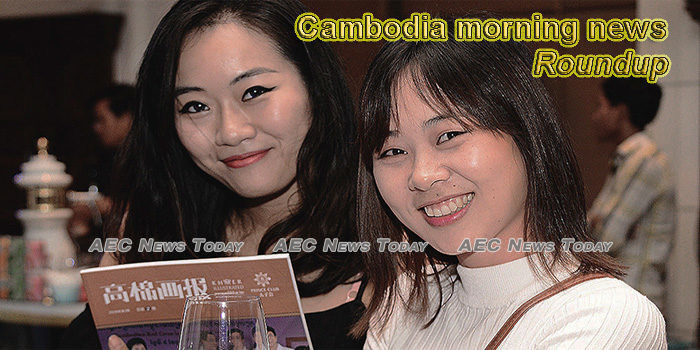 Aftermath of Chinese Exodus from Sihanoukville
Over the past few years with the influx of Chinese nationals and Cambodians working in Sihanoukville, landlords have been laughing all the way to the bank through rentals.
— Khmer Times

Deportations are an obligation facing all nations including Cambodia, says Ambassador Murphy
Deportations of Cambodians living in the United States, including Lowell, have been on the rise.
— Khmer Times

MS Westerdam, COVID-19 and US Ambassador Patrick Murphy
Hundreds of Americans were on the Westerdam cruise ship but with fears of the novel coronavirus, also called COVID-19, gripping the region, the boat was turned away from dock after dock.
— Khmer Times

Caritas transforms farming in Cambodia
In Cambodia, where 1 in 8 people live below the poverty line, the search for work can often separate families.
— Khmer Times

Sar Kheng Warns of Complacency, Says Officials Must Serve Despite No Opposition
Interior Minister Sar Kheng on Wednesday told provincial officials that the absence of an opposition party did not mean they could ignore serving the average Cambodian and they needed to address citizens’ needs.
— VOA Khmer

Anti-logging taskforce touts its case statistics
The National Committee for the Prevention and Crackdown on Natural Resource Crimes, led by the National Military Police, on Wednesday denied that it has hesitated to crack down on illegal logging in Kantuy Neak area located in a protected area in Ratanakkiri province.
— The Phnom Penh Post

Poor families claim land concession sold to others
A group of 160 poor families from the Bunong indigenous community in Mondulkiri province’s Pech Chreada district have filed a complaint against their representative, accusing him of selling land earmarked for them as part of a social land concession.
— The Phnom Penh Post

Sar Kheng in Laos for meetings
Minister of Interior Sar Kheng led a high-level ministerial delegation on a three-day visit in Laos on Wednesday, a ministry press release said.
— The Phnom Penh Post

Plans in place to fight any Covid-19 outbreak
Prime Minister Hun Sen appealed to citizens, ministries and institutions on Wednesday to participate in the fight against the spread of Covid-19, even though no Cambodian has so far contracted the virus.
— The Phnom Penh Post

Journalism amid COVID-19: Professional vs citizen
Despite the government’s claim no Cambodian has been infected by the COVID-19, fake news is rife online.
— Khmer Times

Cambodia, Bangladesh to sign agreement on direct air linkages
The Ministry of Foreign Affairs with its Bangladeshi counterpart, announced plans of signing an agreement to grant the introduction of direct flights from Dakha to Phnom Penh to boost trade volume and tourism.
— Khmer Times

Fish lane built at Pursat dam
A fish passage has been installed at Kbal Hong Dam in the Pursat River to aid the migration of 100 fish species, the Mekong River Commission (MRC) said on Wednesday.
— The Phnom Penh Post

Villagers complain of stench at Takeo farms
Villagers in Takeo province’s Lompong commune in Bati district are complaining that nearby pig and poultry farms are emitting strong odours caused by animal waste. This, they said is leading to health problems and an increase in flies in the area.
— The Phnom Penh Post

Crackdown on unlicensed sand dredging in Ratanakkiri province
Officials from the Ratanakkiri provincial Department of Mines and Energy and Military Police launched a crackdown on unlicensed sand dredging in Kon Mom district’s Sre Angkrang commune which has seen several exhibits seized but no confirmed arrests.
— The Phnom Penh Post

Village doctor arrested over patient’s death
Police in Oddar Meanchey province on Wednesday sent a village physician to the Oddar Meanchey Provincial Court after a man under his care died on Monday.
— The Phnom Penh Post

Hun Sen launches tirade against feng shui master
Prime Minister Hun Sen yesterday rebuked a Singaporean national for insulting the Kingdom over a performance which he alleged was a show of disrespect to the Royal Ballet of Cambodia and to the traditional Khmer culture.
— Khmer Times

Three casinos failed to pay seniority indemnity, says Union
Three casinos in Poipet city have failed to disburse seniority payments to nearly one thousand employees who have worked with the establishments for up to six years, according to unionists.
— Khmer Times

No justice yet for Kep and Sihanoukville collapse victims
Survivors and families of dead victims of building collapses in Kep and Preah Sihanouk provinces are calling for justice over the deadly incidents amid little progress from the courts.
— Khmer Times