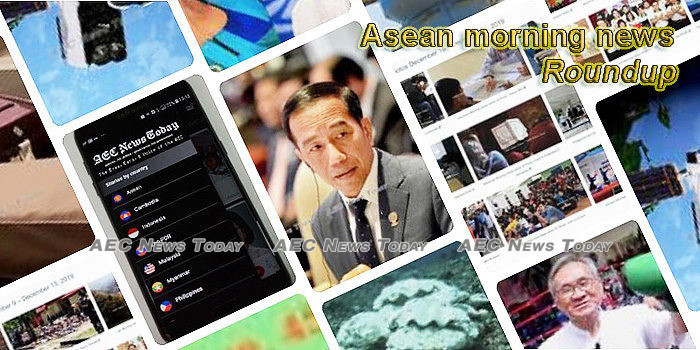 RCEP finale: Double U-turn intrigue
With the Regional Comprehensive Economic Partnership (RCEP) approaching its final stages, some Asean countries are revealing what can only be described as erratic behaviour.
— Bangkok Post

Natuna Conflict: DPR Says Indonesia Must Lobby Neighbors
The House of Representatives’ Commission I suggested the government make a diplomatic breakthrough in dealing with tensions with China in Natuna waters.
— Tempo.co

Healthy Ageing APAC Summit 2020: Academic and industry experts from Singapore, India, Thailand and Malaysia join the bill
Last week we announced that Brands Suntory, Blackmores, Herbalife, Nippn, Amado and Cerecin were among the big name brands confirmed for our Healthy Ageing APAC Summit, and now we can reveal a raft of academic and industry experts have been added to the bil.
— Foodnavigator-asia

Indonesia readies town near Komodo dragon site to host ASEAN, G-20
Indonesia is preparing a town near a World Heritage site inhabited by Komodo dragons, the world’s largest lizards, to host summits of Group of 20 and the Association of Southeast Asian Nations in 2023, President Joko Widodo said Monday.
— The Mainichi

Asean Secretariat invites India for RCEP meeting next month in Bali
The Asean Secretariat has invited India to participate in a meeting called in Bali on February 3 and 4 on RCEP agreement to sort out concerns of New Delhi, an official said.
— Outlook

Direct shipping service expected to boost bilateral trade with Brunei
Strolling around the alleys of minimarkets or supermarkets in Brunei Darussalam, it feels like shopping in Indonesia.
— The Jakarta Post

Global call for applicants to the plastics data challenge by The Incubation Network
The Plastics Data Challenge is a global innovation challenge that will source, support, and scale innovative technologies, methodologies and working prototypes that help entrepreneurs and others collect, analyse and leverage data to understand and address the leakage of plastic waste into the environment.
— Eco-Business

Southeast Asia ups airport security fearing fatal virus
Travelers from China are being screened at several airports across Southeast Asia in the wake of a deadly viral outbreak which originated in the country.
— Anadolu Agency

Vietnam chairs meeting of ASEAN-IPR Governing Council
The 18th meeting of the Governing Council of the ASEAN Institute for Peace and Reconciliation (ASEAN IPR) took place in Jakarta, Indonesia, on January 21, the first during Vietnam’s ASEAN Chairmanship Year 2020.
— Vietnamplus

Snack it Right: DuPont launches research-based ASEAN campaign based on seven concepts
DuPont’s food and beverage arm has just launched a snacking campaign focused on research into ASEAN consumer trends and has identified seven food and beverage concepts to zoom into within this.
— Foodnavigator-asia

Filipinos ‘most worried’ of China’s power in SEA
China’s growing political and economic influence in Southeast Asia (SEA) has become a major concern in the region, but nowhere is that unease stronger than in the Philippines, according to a recent survey of officials, academics and other professionals in SEA.
— Philippine Daily Inquirer

Islamic State Resilience In Southeast Asia? – Analysis
Despite the death of IS’ “caliph” Abu Bakr al-Baghdadi in October 2019, events in Southeast Asia have since shown that IS networks, while weakened through the loss of key leaders and fighters, have regrouped and continued attempts to launch attacks.
— Eurasia Review

Cambodian Authorities On Alert for Novel Coronavirus During Chinese New Year
Cambodia will deploy around 2,000 officials across the country to monitor the return of Chinese nationals during the annual Chinese New Year celebrations this week, after a pneumonia outbreak in China’s Hubei province.
— VOA

Losing dolphins for more hydropower
The construction of the Don Sahong hydropower dam in Laos has affected the habitats of Mekong River dolphins, causing their numbers to dwindle in Stung Treng province.
— Khmer Times

Travelers to Korea, Japan should be wary of nCov: Ministry
The Health Ministry has appealed to Indonesians keen on traveling to Korea and Japan to exercise caution in the face of new-fangled cases of the novel coronavirus (nCov) virus being reported in the countries.
— Antara News

US backs UXO-related activities with US$5 million
The United States government will provide more than US$4.96 million in assistance to Laos from 2019 to 2022 to support an unexploded ordnance (UXO) survey as well as clearance and capacity development activities.
— Vientiane Times (paywall)

Malaysia returns plastic waste to 13 countries
Malaysia has sent back 150 containers of plastic waste to 13 mainly rich countries since the third quarter last year, with the environment minster warning on Monday that those who want to make the country a rubbish bin of the world can “dream on.”
— Columbian

Indonesia calls out Malaysia for ‘ineffective’ security
The government has lambasted the “ineffective coordination” of Malaysian authorities following the abduction of five Indonesian fishermen last week in waters off Sabah, the latest incident to underscore the lack of security in the tri-border area between Malaysia, Indonesia and the Philippines.
— The Jakarta post

Malaysia wields anti-terrorism laws to fight wildlife poaching
Malaysia is stepping up the fight to protect its critically-endangered wildlife by using tough anti-terrorism and money-laundering laws against poachers.
— The Straits Times

Signs of life at ‘no-man’s land’ around Philippine volcano
A desolate landscape of ash dunes and bare trees left by the eruption of the Philippines’ Taal volcano lay in contrast with a few signs of life at ground zero of the disaster on Tuesday.
— CNA

Number of families affected by Taal unrest now over 68K
A total of 68,439 families have so far been affected by the eruption of the Taal Volcano, the National Disaster Risk Reduction and Management Council (NDRRMC) said Tuesday.
— Philippine News Agency

Wuhan virus: Singapore to isolate all travellers from China with pneumonia
From Wednesday (Jan 22), Singapore will place all pneumonia patients who have been to China in recent weeks under isolation, the Ministry of Health (MOH) said on Tuesday.
— Channel NewsAsia (very annoying popups)

Singapore’s War on Diabetes: How industry has played a key role in government’s health battle
Three years after Singapore officially launched its War on Diabetes campaign, with the aim of ‘mobilising the whole nation’ to tackle the condition, we assess how the food and beverage industry has been a key ally in the battle.
— Food Navigator-Asia

Bangkok City Hall suspends classes in 437 schools on Wednesday
The Bangkok Metropolitan Administration (BMA) has suspended classes at 437 schools under its supervision for one day and introduced staggered working hours for all its officials from Wednesday, as airborne PM2.5 dust is forecast to remain excessive in most parts of the capital.
— Thai PBS News

Extra precautions as human transmission of new virus confirmed
Health officials are taking precautions to protect themselves against the new coronavirus after China confirmed it can be transmitted between humans.
— Bangkok Post

Bikers pay price for riding on paths
Bangkok Metropolitan Administration (BMA) has collected more than 21.5 million baht in fines from thousands of motorcycle riders who ignored laws and rode on pavements.
— Bangkok Post

Vietnam’s sugar industry expected to face more difficulties this year
According to the Vietnam Sugarcane and Sugar Association (VSSA), the country produced 1.47 million tons of sugar in the 2017-2018 crop and in the 2018-2019 crop, the production dropped to 1.17 million tons with the area of sugarcanes reducing by 30-60 percent compared to the previous years and 17 out of 30 sugar refineries suffering losses.
— Sggp News

EU-Vietnam free trade deal gets green light in trade committee
The Committee on International Trade backed the free trade and investment protection agreements between the EU and Vietnam on Tuesday.
— Europal

Asean morning news for May 19