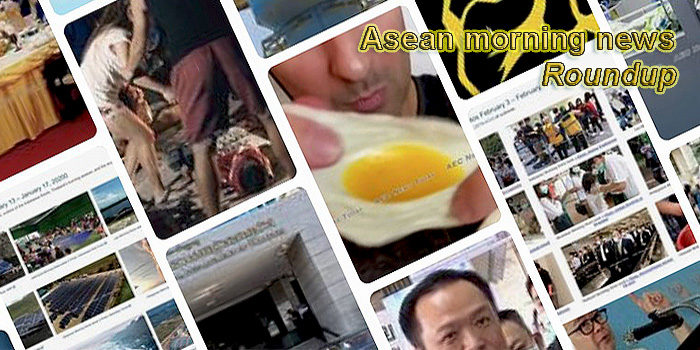 The Coronavirus and ASEAN – Live Updates by Country
Due to the developing situation in China and Asia concerning the Coronavirus, we will be operating this article as a running live update service to keep businesses involved in ASEAN and Asia updated with the latest relevant regional news.
— Asean Briefing

‘Steady wave’ of fake news on coronavirus in the region: Facebook fact-checker
No, you cannot steam your face masks in order to reuse them in the battle against the novel coronavirus.
— CNA

ASEAN together can make a high mountain
The chairmanship of ASEAN rotates annually in alphabetical order, and the clock usually starts ticking from the ASEAN Foreign Ministers’ Retreat.
— The Jakarta Post

Vietnam’s ASEAN Chairmanship 2020: What To Expect – Analysis
Vietnam was long perceived as a security threat by other ASEAN members, before it joined ASEAN in 1995.
— Eurasia Review

SEA unicorns creating new wave of entrepreneurs, startup capital
The thriving startup ecosystem and string of unicorns in Southeast Asia have helped create a new community of entrepreneurs who are investing in other startups and offering access to new capital that may not have existed before.
— ZDNet

This Sector in Southeast Asia Showed Growth, Even as It Slowed for Other Regions
Four out of five countries in Southeast Asia showed a 3 per cent growth in sales of technical consumer goods in 2019, a study by analytics firm GfK Global showed, in sharp contrast to other regions in the world that reported a slowdown.
— Entrepreneur

SE Asia Stocks-End firmer as China halves tariffs on some U.S. goods
Southeast Asian stocks closed firmer on Thursday after China decided to slash tariffs on some U.S. imports, offering relief to markets that were gripped by slowdown worries amid the coronavirus outbreak.
— Reuters

D2C: Is it time for the next phase of ecommerce in SEA?
Direct-to-Consumers (D2C) startups globally strive to achieve the type of recognition achieved by Dollar Shave Club and Warby Parker in the US by selling premium branding with relatively affordable pricing.
— e27

Hanoi FC among Southeast Asia’s best
The capital city’s football club is placed in the top six teams of the region in the latest ranking by Asian Football Confederation (AFC).
— VnExpress International

Taking male rape seriously
Just a few months ago, the world was horrified from the news of Reynhard Sinaga – said to be the most prolific rapist in British history, with 159 counts of sexual offences against 48 men and an estimated 70 victims who have yet to be identified.
— The Asean Post

China will support Kingdom despite EBA withdrawal: Official
President Xi Jinping has reassured Prime Minister Hun Sen that China will continue to support the Kingdom’s economy despite a potential Everything-but-arms suspension by the European Commission this month.
— Khmer Times

Cambodia’s First Patient with the Wuhan Coronavirus Believed Cured
“The patient’s health is now better,” the ministry said in a press release. “He went through laboratory tests two times [conducted] by the Institut Pasteur du Cambodge and they have shown negative results as of February 6, 2020.”
— Thmey Thmey

Man held, released after insulting PM on Facebook
A man who insulted Prime Minister Hun Sen in a Facebook post regarding the coronavirus a few days ago in Pursat province has been released following his arrest on Monday.
— The Phnom Penh Post

Forty specimens tested negative for Wuhan coronavirus: Ministry
The Health Ministry revealed Wednesday that 40 specimens of individuals being monitored for the novel coronavirus have tested negative, while two others are still under observation.
— The Jakarta Post

Health ministry requests int’l support to prevent virus outbreak
Health minister Associate Prof. Bounkong Syhavong met with the country’s development partners on Tuesday to ask for their support to enhance Laos’ capacity to combat the deadly virus, which has infected at least 24,300 people and killed more than 490 across the globe.
— ANN/Vientiane Times

First Malaysian-transmitted coronavirus case confirmed
The health ministry today confirmed another two coronavirus cases, bringing the total number of confirmed cases to 14. One person is a Malaysian woman while the other is a 37-year-old Chinese national.
— FMT

Ban on house workers to Kuwait remains
THE DEPARTMENT of Labor and Employment (DoLE) on Thursday announced the partial lifting of the total deployment ban on overseas Filipino workers (OFWs) to Kuwait, which excludes household service workers.
— BusinessWorld

Persons under probe for 2019-nCoV infection climbs to 178 — DOH
Health Secretary Francisco Duque III said that out of the 178 PUIs, three have tested positive for 2019-nCoV as earlier reported, 48 have tested negative, while 127 are still pending confirmation.
— GMA Network

Wuhan virus: Singapore becomes 2nd most infected country after Japan outside of China
Yesterday (5 Feb), it was reported that Ministry of Health (MOH) has confirmed four new cases of the novel Wuhan coronavirus in Singapore.
— The Online Citizen

PM urges public to use water sparingly during current drought
Prime Minister Prayut Chan-o-cha has beseeched the Thai people not to waste water, saying that the volume of water in the country’s 15 major sources is at a critically low level and no significant rainfall is forecast until May.
— Thai PBS News

Thai Public Health Minister reverses stance on banning all Chinese tourists from entering country, says it is not a solution
Public health minister Anutin Charnvirakul on Thursday said imposing a travel ban on Chinese nationals would not help the government’s fight against coronavirus epidemic.
— The Pattaya News

Two more Vietnamese tested positive for the coronavirus, raising total infections to 12
One patient is the 49-year-old mother while the other is the 16-year-old sister of the infected female worker, who is 23, in the northern province of Vinh Phuc. The mother started coughing on February 3, while the sister had coughing and fatigue. VNExpress, a local media reports on Thursday.
— Vietnam Insider