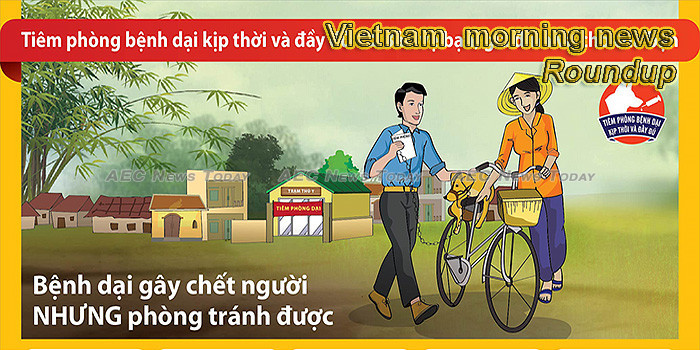 More import and export procedures to be put online by 2020
The Agency of Foreign Trade under the Ministry of Industry and Trade is expected to deploy over 30 online administrative procedures at level 3 and 4 by 2020.
— NDO

E-commerce & e-logistics become indispensable to Vietnamese exporters
At a conference held on September 13 by the Ministry of Industry and Trade (MoIT) and the Ministry of Agriculture and Rural Development, there was agreement that the new requirements by China and other international markets remain a challenge to Vietnamese exporters, urging them to make changes to adapt.
— Fresh Plaza

USAID helps Vietnamese SMEs improve linkage capacity
The Government Office, the Ministry of Planning and Investment and the US Agency for International Development (USAID) launched the USAID Linkages for Small and Medium Enterprises (LinkSME) in Hanoi on September 24.
— VietnamPlus

Vietnam-Russia Bilateral Ties Deepen, Boost Investment
Russia was one of the first countries to establish diplomatic relations with Vietnam, laying the groundwork for a strong bilateral and economic relationship between the countries.
— Vietnam Briefing

US$22.1 million to strengthen linkages for Vietnamese SMEs
The United States Agency for International Development (USAID), the Government Office and the Ministry of Planning and Investment (MPI) co-launched a project on strengthening reforms and enhancing the linkage capability of Vietnam’s small and medium-sized enterprises (SMEs) in Hanoi on September 24.
— NDO

Banks raise short-term deposit rates to more than 8%
Commercial banks have recently raised their interest rates for six-month deposits to a record high of more than 8 per cent per year.
— Viet Nam News

World’s Latest Automotive Manufacturer Comes out of Vietnam
Vietnam wants to enter big time manufacturing in a big way – and is in a hurry to do it.
— Engineering

So you’re moving to Vietnam?
“Whilst Thailand is often nicknamed the ‘land of a thousand 7-elevens’, with a convenience store on just about every corner, there are none of these in Vietnam, yet.”
— The Thaiger

Conference to be held next month on SOE restructuring
Sixty-two SOEs will cut State ownership to 50-65 per cent after being equitised such as telecoms groups Mobifone and VNPT, the Vietnam National Coffee Corporation (VINACAFE) and the Vietnam Cement Industry Corporation (Vicem).
— Viet Nam News

Shares in dairy firm Vinamilk soar after trip to China
Shares in dairy giant Vinamilk have unexpectedly soared by 4 per cent in the last two days after the company’s milk products were launched in China last week.
— Viet Nam News

Unilever begins programme to grow trees
From now through next February some 30,000 saplings will be planted around the country under a Unilever programme called “Ươm mầm xanh” (Germinate green seeds).
— Viet Nam News

Women in tech: Carman Chan’s Click Ventures is one of the most consistent VC funds globally
Serial entrepreneur turning angel investor turned VC, Carman Chan is one of the top women in tech in Asia The venture capital market has more than doubled in size over the past five years says a research by Prequin. And Asia is not too far from all the VC action. Hong Kong’s Click Ventures is […]
— e27

RCEP talks to solve trade barriers and find mutual ground
The final round of negotiations for the Regional Comprehensive Economic Partnership (RCEP) – a trade agreement between the ten member states of ASEAN and its six partners: Australia, China, India, Japan, New Zealand and South Korea – will focus on resolving issues and reaching mutual ground on market openness, trade freedom for goods and services as.
— Viet Nam News

Climate change awareness week launched in Việt Nam
A week-long series of activities to raise awareness about climate change is set to kick off on Friday across Hà Nội, Đà Nẵng and Hội An.
— Viet Nam Net

Realty, banking drives VN-Index up
Shares of banks and property developers were the main factors that pushed the southern index up in the morning session.
— Viet Nam News

It’s Vietbuild expo time again in HCM City
The Vietbuild International Exhibition with the theme real estate, architecture, and interior and exterior decoration will be held in HCM City from September 25 to 29.
— Viet Nam News

Vietnam’s UPGen expands its spaces to Thailand and Malaysia
Coworking solutions provider, UPGen is one of only a few home-grown workspace operators to be pursuing regional expansion Vietnam’s largest flexible and custom workspace solutions provider UPGen, announced its expansion into Southeast Asia with new locations in Bangkok and Kuala Lumpur.
— e27

Vietnam bolsters parliamentary cooperation with Asian, European nations
Standing Vice Chairwoman of the National Assembly (NA) Tong Thi Phong on September 23 had bilateral meetings with foreign delegates on the sidelines of the 4th Meeting of Speakers of Eurasian Countries’ Parliaments (MSEAP) which takes place in Kazakhstan on September 23-24.
— NDO

Experts call for new mindset in managing SOEs in Vietnam
The ultimate objective of enterprises is to maximize profit, so the government should not consider SOEs an instrument for marco-economic management, as this approach could cause disruptions to their operations, said an expert.
— The Hanoitimes

Vietnam, US work together to combat African swine fever
The spread of African swine fever (ASF) continues, causing losses for breeders, said Pham Van Dong, head of the Department of Animal Health at the Ministry of Agriculture and Rural Development.
— VietnamPlus

Vietnam puts right conditions in place for startups to grow
The trade war gave a big boost, but let’s not forget that Vietnam is a fast-growing market in its own right and has the right conditions for the startup scene to grow and mature regardless, said Nikhilesh Goel, co-founder and COO of Southeast Asia investment firm Validus Capital.
— The Hanoitimes