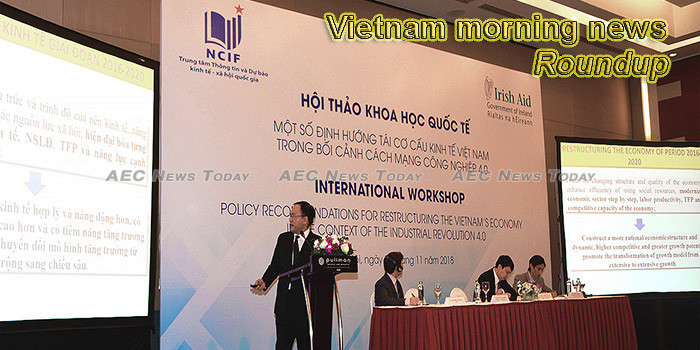 USDA trade chief considered Vietnam major potential importer of US products
Last year, Vietnam was the seventh largest market for US agricultural products at US$4.2 billion.
— The Hanoitimes

Vietnam set to be biggest contributor to growth of SE Asia digital spending
The rapid digitalization of communities in Indonesia, Thailand and Vietnam made these countries the top contenders for the region`s digital spending crown.
— The Hanoitimes

Hanoi, HCM City build smoke-free environments in public areas
The cities are trying to encourage people not to smoke in hospitals, hotels, restaurants and bus stations in order to reduce the harmful effects of passive smoking.
— VietnamPlus

Vietnam begins to realise marine aquaculture potential
Coastal aquaculture is being developed in many localities but the output is very small compared to the country’s potential, experts have said.
— VietnamPlus

Five countries in South Asia and SEA with the best prospects for online micro consumer lending
According to the analysts of the financial holding Robocash Group who made a corporate ranking of countries in South and Southeast Asia, Laos, India, the Philippines, Myanmar and Vietnam have the highest prospects for the development of online micro consumer lending.
— Vietnam Insider

Vietnam was ranked 10th among the top 20 countries to visit in 2020: Conde Nast Traveler
Many other Southeast Asian countries were included in the list with Indonesia taking the first position, followed by Thailand.
— Vietnam Insider

Indonesia’s first president popular among Vietnamese citizens
Indonesia’s first president Soekarno has been popular among Vietnamese citizens as he had a close relationship with the country’s first leader, Ho Chi Minh, the Ambassador of Indonesia to Vietnam Ibnu Hadi said during an interview for ANTARA, here, Saturday.
— Antara News

VN banks report higher profit
VIetnam’s banks are reporting better profit for the third quarter this year, with Vietcombank leading the way despite the predicted slowdown in credit growth.
— The Phnom Penh Post

E-commerce to give firms more export chances: workshop
Vietnam has been recording strong development in e-commerce, through which businesses will have more chances to promote export, an official said at a workshop in Hanoi on October 18.
— NDO

Grapes from the Spanish region of Murcia have arrived in the big cities of Vietnam
The three hundred people who attended a reception at the Spanish embassy in Hanoi, including diplomatic corps and Spanish residents, on the occasion of Hispanic Day were gifted a basket of Murcian grapes as a celebration of the fruit’s arrival in that country.
— Fresh Plaza

Vietnam’s growing alcohol and salt addiction
The news that almost 60 percent of Vietnamese consume excessive salt and alcohol is one of the negative consequences of its remarkable economic progress.
— The Asean Post

Vietnamese culture and cuisine impress French people
A programme promoting Vietnam’s heritage and cuisine was held in the town of Argelès-sur-Mer in the south of France on October 17-18.
— NDO

Apartment prices rising faster than rents in Saigon
The selling price of apartments in HCMC increased 11.8 percent on average in Q3, while rents rose 5.4 percent.
— VnExpress

FPT profit up 28 percent in 9 months
Vietnamese IT giant FPT Corporation posted a 28 percent increase in pretax profit in the first 9 months of the year, mainly contributed by its technology sector.
— VnExpress

VN deputy minister: Schools need to focus more on entrepreneurship
Entrepreneurship has been ignored by schools and young people in Vietnam for too long, Deputy Minister of Science and Technology Bui The Duy has said.
— The Phnom Penh Post

Vietnam places order for Japanese satellite
The Vietnamese government on Friday concluded a contract with major Japanese trader Sumitomo Corp. for a Japanese-made satellite to monitor the weather and climate for disaster prevention.
— The Japan News

Vietnam Marine veteran in New Mexico hospice care reunites with beloved dog one last time
A New Mexico veteran who served with the Marines in Vietnam said a final goodbye last week to the beloved dog he had to put up for adoption when he entered hospice care.
— Fox News

Banks report higher profits
Banks are reporting better profits for the third quarter this year, with Vietcombank leading the way despite the predicted slowdown in credit growth.
— VietnamPlus

Saigon’s Most Popular Hindu Temple
For most first time Indian visitors to Vietnam, it comes as an absolute and very pleasant surprise to find a sacred Hindu Temple, which is still open for worship, in the very heart of a bustling downtown area of Saigon.
— Sggp News

Map of E-commerce Vietnam for Q3/2019: Sendo raises to 2nd, Lazada misses the top 4 in website traffic
According to the latest update from Map of E-commerce conducted by iPrice Group, the number of visitors to Sendo’s website in the third quarter reached 30.9 million per month.
— Vietnam Insider

Stronger actions urged to reduce plastic waste in aquaculture sector
Experts and researchers gathered at a national conference held in the central city of Da Nang on October 20 to discuss measures to reduce ocean debris from aquaculture activities.
— VietnamPlus

Central kitchen model heats up in Vietnam
The increasing demand for food delivery applications has helped spread the trend of central kitchens from China, India, Japan and Indonesia to Vietnam.
— VietnamPlus