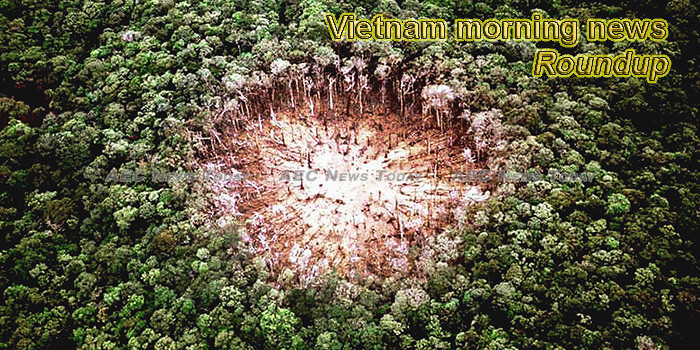 Vietnam pledges to uphold the law in South China Sea at ASEAN summit
Vietnam has said it will continue to uphold international laws in the South China Sea to ensure peace and stability in the region.
— VnExpress

Malaysia to boost trade volume with Vietnam
Vietnam-Malaysia Business Association spokesperson Dinh Hai Yen said that for last year, Vietnam’s total export of various goods to Malaysia was US$3.81 billion, while its import from Malaysia was US$1.75 billion.
— New Strait Times

Husbandry industry aims to export 15-30 percent of production by 2030
According to figures by the General Statistics Office of Vietnam, in the period from 2008 to 2018, meat production increased by more than 1.5 times; eggs rose by 2.3 times; fresh milk climbed by 3.6 times; and industrial animal feed surged by 2.4 times.
— Sggp News

US project to promote rooftop solar technology, electric vehicles
Rooftop solar and advanced battery storage technology are among innovative energy security solutions to be promoted by a $14 mln USAID project in Vietnam.
— VnExpress

US forecasts bright outlook for trade with Vietnam
Vietnam has become central to the US policy in the Asia-Pacific region as ties between the two countries have strengthened in recent years, Marie Damour, the US consul general in HCM City, said at a recent conference.
— VietnamPlus

Spotlight: Immersed in grief, Vietnam mulls over preventing relapse of migrant death tragedy
After British authorities’ confirmation of Vietnamese victims among the 39 dead in Essex lorry, organizations and individuals in Vietnam have dug into underlying causes of illegal immigration, as well as measures to bolster labor export management and combat human trafficking, so as not to repeat the tragedy.
— Xinhua

Vietnam seeks WTO role in cement issue with PHL
VIETNAM at the World Trade Organization (WTO) is asking the Philippines for compensation after its export interests got hit by the safeguard measure Manila slapped on cement.
— Business Mirror

Fitch keeps Vietnam’s sovereign rating steady at ‘BB’
Fitch Ratings has kept Vietnam’s sovereign rating at ‘BB’ with a positive outlook, saying the delayed payment on a Vietnamese government-guaranteed loan in September was paid in full within the month and Fitch understands the administrative problems that gave rise to this delay are being addressed.
— The Phnom Penh Post

A night inside the world’s largest cave network in Vietnam
Emma Pearson treks through jungle, abseils down cliffs and shimmies through crevices to spend the night in one of the largest caves in the world.
— Vietnam Insider

450 firms to take part in Vietnam Foodexpo
Some 450 companies have registered to participate in the 2019 Việt Nam International Food Industry Exhibition to be held in HCM City from November 13 to 16.
— Viet Nam News

The heat is on in Saigon
When you talk about Saigon, most Filipinos are familiar with Miss Saigon, the Cameron Mackintosh musical that starred Lea Salonga as a Vietnamese woman who falls in love with an American soldier.
— PhilStar

Vietnam needs to act in Mekong Delta as land sinking, seas rising: experts
With the Mekong Delta found to be lower than earlier thought, and subsidence and rising seas threatening a double whammy, alarm bells are ringing.
— VnExpress

New policy needed for young start-ups
Building the correct legal framework is one of the major challenges holding back start-up businesses and now the Government is looking at easing red-tape and giving an easier ride to both young companies and the private sector.
— VietnamPlus