Vietnam morning news for May 7 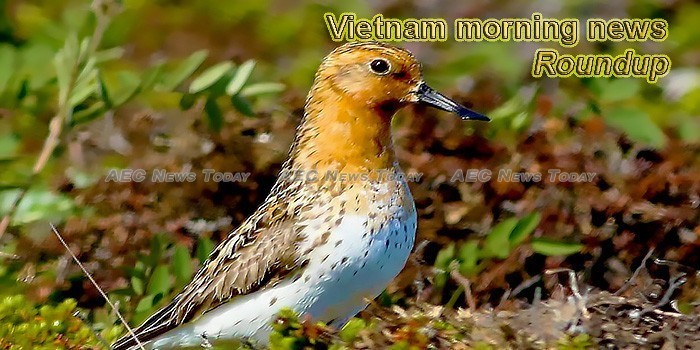 Vietnamese firms seek to adapt to official exports to China
Vietnamese businesses and farmers face various challenges in exporting farm produce to China, which is shifting from unofficial channels to official ones.
— VietnamPlus

Vietnam’s fruit, veggie export increases in 4 months
Vietnam earned nearly 1.4 billion U.S. dollars from exporting fruits and vegetables in the first four months of this year, up 5.5 percent on-year, with China being the largest importer, the Vietnamese Ministry of Agriculture and Rural Development said on Monday.
— Xinhua

Vietnam to start direct flights to US as early as this year
Vietnamese airlines are preparing to launch direct flights to the U.S., paving the way for a new era of economic ties between the Southeast Asian country and its biggest export market.
— Nikkei Asian Review (paywall)

Forum encourages development of VN tech firms
The National Forum on Developing Vietnam Technology Companies will be held for the first time in Hanoi on May 9, said Deputy Minister of Information and Communications Phan Tam.
— Nhan Dan Online

Vietnam has become an accelerator for startups
Truong Trong Toai, a graduate of the Ho Chi Minh City University of Technology, started Robot3T at the end of 2014 to turn the dream of a “Made in Vietnam robot” into reality.
— Vietnam Insider

How Vietnam, Philippines Will Get around China’s Fishing Ban in Disputed Sea
Beijing has declared a moratorium on fishing in about half the heavily disputed South China Sea every year since 1995. And every year other countries with competing sovereignty claims keep letting their own fishing fleets do as they wish.
— VOA

Foreign investment in Vietnam’s banks depends on ownership limit
As the domestic capital market is underdeveloped, Vietnamese banks are in dire need of foreign capital to meet Basel II standards by 2020 as required by the central bank.
— The Hanoitimes

Government to inspect power price hike
Government inspectors will investigate the latest power price increase by 8.36 per cent to VNĐ1,864 (8.03 US cents) per kWh from March 20 following concerns among the public.
— Viet Nam News

Banks’ interest receivables get little attention
Experts have called on the Ministry of Finance and State Bank of Việt Nam to carefully assess how lenders are accounting for interest receivables in order to take proper measures to make them reflect their actual revenue situation.
— Viet Nam News

Banks race to offload expensive property as bad debt buyback looms
Many banks are looking to sell mortgaged assets as they prepare to buy back bad debt from the state.
— VnExpress

Why does Vietnam label plans on energy price hike “secret”?
Senior government officials said that electricity and gasoline are items leaving impacts on the economy and catching public attention.
— The Hanoitimes

Cần Thơ targets treatment of all solid waste
The Mekong Delta city of Cần Thơ plans to collect 100 per cent of its solid household waste in urban areas in the 2020-30 period.
— Viet Nam Net

Progress of SOEs privatization remains far behind schedule
In the first four months of 2019, government agencies have approved the privatization scheme of just two SOEs with total value of VND295 billion (US$12.73 billion).
— The Hanoitimes

Market to witness turbulent trading
The market is forecast to fluctuate sideways this week as brokerages forecast shares will experience some alternate volatility and corrections.
— Viet Nam News

Vietnam, Cuba to strengthen ICT collaboration
The governments of Vietnam and Cuba have agreed to strengthen cooperation on communications, IT and cybersecurity.
— TelecomAsia

New Peugeot manufacturing plant debuts in Quảng Nam
The luxury European car brand’s plant, which cost VNĐ4.5 trillion (nearly US$200 million), was designed with a total capacity of 20,000 cars per year for domestic use and export.
— Viet Nam News

More tourists head for Vietnam
Vietnam clocked up close to 6 million visits in the first four months of the year encouraging officials to believe the country could welcome around 18 million visits by the end of 2019.
— TTR Weekly

Highest-ever Foreign Investment for a Quarter in Vietnam
Hanoi, May 6 (Prensa Latina) Foreign direct investment in Vietnam reached 14.59 billion dollars in the first four months of 2019, a historic figure for a four-month period.
— Plenglish

New Peugeot manufacturing plant debuts in Quảng Nam
The luxury European car brand’s plant, which cost VNĐ4.5 trillion (nearly US$200 million), was designed with a total capacity of 20,000 cars per year for domestic use and export.
— Viet Nam News

Market to witness turbulent trading
The market is forecast to fluctuate sideways this week as brokerages forecast shares will experience some alternate volatility and corrections.
— Viet Nam News