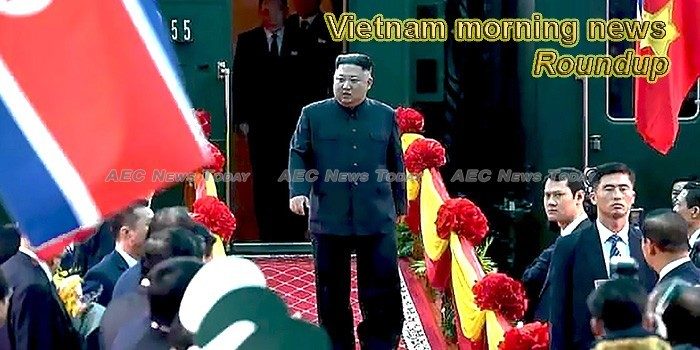 Vietnam Extends List Of Countries Eligible For E-Visa To 80
Vietnam has extended the list of countries qualifying for e-visas by 34 to 80 and extended the scheme to January 31, 2021. The new countries include major source markets in Europe.
— Investvine

Vietnamese pork banned in several countries due to swine fever fears
Many countries are banning pork imports from Vietnam following the recent outbreaks of African swine fever in the country.
— VnExpress

US-Vietnam economic relations: The China factor
While addressing a joint Press Conference at Hanoi, after his summit, with North Korean Leader Kim Jong Un, US President, Donald Trump spoke not just about the Summit, but also the current state of US-China relations. Trump criticized his predecessors, for not doing enough to address the trade imbalance with China, while also making the point, that he was all for China’s economic progress and growth, but not at the cost of the US.
— Modern Diplomacy

Vietnam’s goods export to US increases sharply
According to the General Department of Vietnam Customs, value of goods trade between Vietnam and the United States increased from US$ 18 billion in 2010 to nearly US$ 60.3 billion in 2018.
— Sggp news

Hanoi: 1,300 more apartments to be available
Hanoi will soon have 1,300 new apartments thanks to a social housing project invested by Capital House Group, a real estate developer focusing on green buildings in Vietnam.
— VNA NET

Bamboo Airways to expand routes throughout Vietnam
Vietnam’s newest carrier Bamboo Airways is carrying out its plan to conduct flights on 37-40 air routes in 2019 with the aim of expanding its network across Vietnam, according to General Director Dang Tat Thang.
— VNA NET

Will Vietnamese e-Commerce competitions still have enough vacancy for new warriors?
In addition to the bright and prominent names such as Shopee, Tiki, Lazada, Sendo, Thegioididong, Adayroi, etc. There are also many brands that have to withdraw from this war like Beyeu.com, Deca, Foodpanda, Lingo, etc or most recently Vui Vui (vuivui.com) of the Mobile World was officially closed from the end of November 2018.
— Vietnam Insider

National IIP down almost 17% in February
The national industrial production index (IIP) in February was estimated to decrease by 16.8 per cent over the previous month due to the Lunar New Year holiday, according to the General Statistics Office (GSO).
— Bizhub

ELSA – Vietnam’s app for English pronunciation wins over learners
Learning English through apps is not a new idea in Vietnam, but in 2018 Vietnam’s startup community saw the arrival of the ELSA app, or “English Language Speech Assistant”, which raised $3.2 million for its AI-assisted language learning platform. This pre-Series A round of funding was led by Monk’s Hill Ventures, which invests in post-seed stage startups in Southeast Asia.
— Vietnam Insider

Pilots’ job-hopping causing problems for Vietnamese airlines
The shortage of qualified pilots is getting more serious in Vietnam as more air carriers receive licenses to operate in the country.
— Vietnam Insider

Registration fee for pickups to be tripled
Registration fees for pickup trucks and vans will be raised to 6 per cent of the vehicles value from the current rate of 2 per cent from April 10, according to a revised Government decree.
— Viet Nam News

Phu Tho to invest 5 million USD in tea industry development
The northern province of Phu Tho plans to spend 118 billion VND (more than 5 million USD) on developing the tea sector to improve the productivity and quality of local tea products.
— VNA NET

National IIP down almost 17% in February
The national industrial production index (IIP) in February was estimated to decrease by 16.8 per cent over the previous month due to the Lunar New Year holiday, according to the General Statistics Office (GSO).
— Viet Nam News

Derivatives market trading liquidity signals stabilisation
The liquidity on the derivatives market has shown signs of improvement and stabilising in the past two weeks, beating previous projection that the new trading fees may discourage them from derivative trading.
— Bizhub