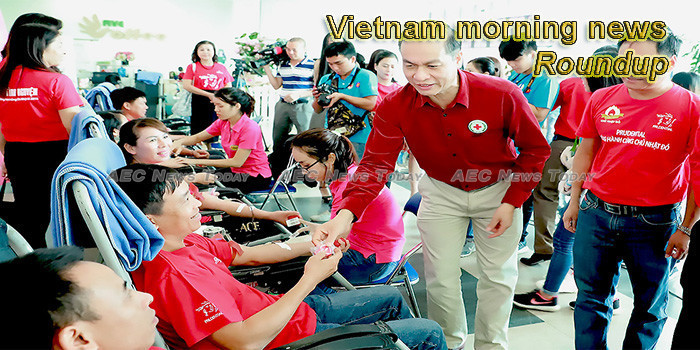 Hanoi to curb fake ‘Made-in-Vietnam’ goods
Hanoi has vowed to crack down on manufacturers illegally using “Made in Vietnam” labels on items destined for America to dodge punishing tariffs as the US-China trade spat drags on.
— The Asean post

Vietnam Foreign Policy in the UN Security Council Spotlight
The country’s upcoming UNSC stint will spotlight Hanoi’s approach to the world, and the opportunities and challenges therein.
— The Diplomat

Vietnam’s Foreign Contractor Tax – 3 Ways to Calculate FCT
Foreign contractors are subject to taxes on payments for work done in Vietnam based on the contracts signed with a Vietnamese partner in the form of the foreign contractor tax (FCT).
— Vietnam Briefing

Vietnam plays role of reluctant Asian middle power
In private discussions with senior Vietnamese foreign ministry officials, one could easily get the feeling that the socialist republic is a reluctant rising middle power in Asia.
— Bangkok Post

Vietnam legislators: Alcohol bill not influenced by lobbying
The National Assembly general secretary, asked if interest groups have influenced a bill against alcohol, has assured that lobbying cannot sway the lawmaking process.
— VnExpress

Vietnam’s footwear export up 14.3 pct in 5 months
Vietnam made footwear export turnovers of more than 7.1 billion U.S. dollars in the first five months of this year, witnessing a year-on-year rise of 14.3 percent, according to the Vietnam Leather, Footwear and Handbag Association on Tuesday.
— Xinhua

Half of Nike products sold globally made in Vietnam
Nike’s Vice President Chris Helzer highly regarded the quality of Vietnam’s labor force, which has contributed to the success of Nike as one of the world’s largest sportswear and accessories companies.
— The Hanoitimes

Vietnam biggest winner from US-China trade war
Vietnam’s already strong economic outlook received another boost last week after Japanese investment bank Nomura named it the biggest winner from the United States (US) – China trade war, with its economy surging by 7.9 percent as a result of one year’s worth of trade diversions leading up to the first quarter of this year.
— The Asean post

Only three SOEs have equitisation plans approved in five months
Only three state-owned enterprises (SOEs) got the nod from authorized agencies for their equitisation plans in the first five months of this year, lifting the total number of companies to have plans approved by the end of May 2019 to 30, according to the Ministry of Finance.
— VietnamPlus

Vietnam: then and now and the future
People usually ask me if Vietnam is a competitor to Thailand or if it has surpassed Thailand. It is because there is an anxiety in Bangkok about the quick leap to big growth in the economy and business in the neighboring Socialist Republic of Vietnam.
— The Nation

Vietnam’s Vimo and mPOS to combine With Plans to Raise $30 Million
Two of Vietnam’s payments startups are merging to add scale in the market where cashless payments are booming.
— Vietnam Insider

Int’l agricultural fertilisers and plant protection product expo opens in HCM City
A wide range of fertilisers, agricultural machinery, packaging equipment, pesticides and and other products are on display at the third international exhibition for the fertilizer and pesticide industry at an expo that opened in HCM City today (June 11).
— Viet Nam News

5 Restaurants In Vietnam That Will Make You Feel Relaxed
Vietnamese food is now making its way in the international scene for its healthier take on different dishes. Vietnam is known for using less oil and meat and incorporating meals with a lot of vegetables.
— Vietnam Insider

Vietnam sees new movement of FDI inflows
The investment inflow from China to Vietnam is seeing big changes with large investors pouring into the country, instead of just small ones as previously.
— The Hanoitimes

Ba Ria – Vung Tau lures capital from Japan
The southern province of Ba Ria – Vung Tau is working to draw more investment from Japan as it defined the country as one of its future strategic investors, said the provincial Department of Planning and Investment.
— VietnamPlus

How China’s Belt and Road Initiative could lead Vietnam away from renewable energy and towards coal
Even as China turns away from coal-fired power domestically, its financial institutions continue to fund coal plants overseas, including in countries like Vietnam, which have great potential for wind and solar power generation.
— South China Morning Post

Vietnamese model who wore see-through dress to Cannes could be fined in Vietnam for indecency
Vietnam’s Minister of Culture, Sports and Tourism said the dress caused public outrage.
— Mothership

Victims of Formosa spill in Vietnam seek compensation
TAIPEI: Lawyers in Taiwan launched a multi-million dollar lawsuit against the industrial conglomerate Formosa on Tuesday (Jun 11), on behalf of thousands of Vietnamese whose livelihoods were ruined by a toxic spill that devastated fish stocks.
— Channel NewsAsia

Share rally narrows in afternoon trade
Vietnamese markets had a good start on Monday thanks to the performance of large-cap stocks but momentum narrowed in the afternoon.
— Viet Nam News

Lao Morning News For May 25