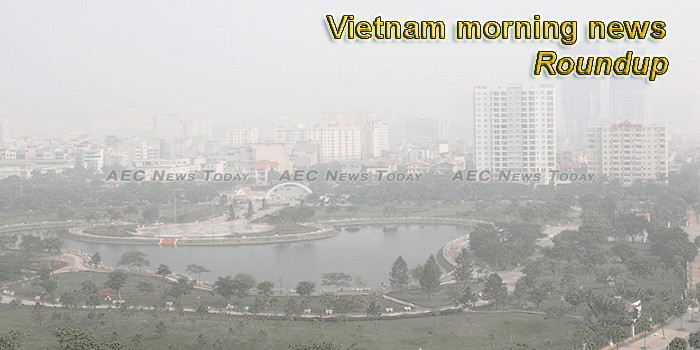 Vietnam says Chinese vessel violated its sovereignty in South China Sea, tells Beijing to remove ships
Vietnam on Friday accused a Chinese oil survey vessel and its escorts of violating its sovereignty and demanded that China remove the ships from Vietnamese waters. Vietnam and China have for years been embroiled in a dispute over the potentially energy-rich stretch of waters in the South China Sea.
— Spratly Islands

Vietnam Startups Are Attracting Big Venture Capital Money
Startup companies in Vietnam, ranging from FinTech to logistics and artificial intelligence, are attracting a record amount of venture capital money in the country, according to a report by the Financial Times.
— pymnts

Vietnam FTA: EU is more pragmatic than principled
On June 30, after almost seven years of discussions and negotiation, pen was finally put to paper on the European Union-Vietnam Free Trade Agreement – or the EVFTA, as it is commonly known.
— Asia Times

Facebook-Style App Launches in Vietnam Amid Tightening Internet Rules
The Communist government has called on domestic tech companies to create alternatives to US tech giants like Facebook and Google.
— Irrawaddy

Vietnam’s cashew export to China strongly rises
Vietnam raked in 221.47 million USD from exporting over 28,000 tonnes of cashew nut to China in the first half of this year, up 24.8 percent in value and 53.2 percent in volume year-on-year, according to the General Department of Customs.
— VietnamPlus

Venture capital piles into Vietnamese technology companies
Vietnamese companies in sectors ranging from trucking to fintech and facial recognition are attracting a record wave of venture capital money, drawn in by the digital transformation and growing wealth of one of Asia’s youngest and fastest growing economies.
— Financial Times

HCM City to host Vietnam M&A Forum in August
The Vietnam M&A forum 2019, an annual event of mergers and acquisitions for domestic and foreign enterprises, will return in its 11th edition at GEM Conference Centre in Ho Chi Minh City on August 6.
— NDO

Vietjet Recognised as One of “Vietnam’s 50 Best Performing Companies in 2018”
Vietjet was recognised as one of the leading companies in “Vietnam’s 50 Best Performing Companies 2018”. Held in Ho Chi Minh City on 27 June 2019, the award ceremony celebrated the leading companies listed on Vietnam’s stock market for their significant contribution to the economy.
— Alvaradonews

US working with Vietnam to strengthen coast guard force
The U.S. Coast Guard is closely cooperating with its Vietnamese counterpart and will continue supporting regional nations, said a senior U.S. official.
— VnExpress

New social media app Gapo aims to rival Facebook in Vietnam, as state clamps down on tech giants
A Facebook-style social network was launched in Vietnam on Tuesday, following calls by the Communist-ruled government for domestic tech companies to create alternatives to US tech giants Facebook and Google.
— South China Morning Post

Vietnam franchise opportunities Booming
The brands will gather at VF Franchise Consulting headquarters in Ho Chi Minh City on July 9 to meet with prospective area or master franchisees for the market. The franchises are in the food-and-beverage sector, education, services, and come from the US, Taiwan, Thailand, Singapore, India and Japan.
— Retail News

Vietnam asks China to help find missing boat with five fishermen
Vietnam is seeking Chinese help to find a fishing vessel with five people on board that has been missing since July 2.
— VnExpress

Vietnam faces challenges from US-China trade conflict
In general, Vietnam reaped no rewards from the trade war and is facing obstacles in shipments to several markets.
— The Hanoitimes

Việt Nam seeks foreign investment in ports
Việt Nam is encouraging investors from all around the world to develop its ports, according to the Việt Nam Maritime Administration.
— Viet Nam News

Comprehensive policy needed in time of digital communication economy: forum
Social media spreads information and disinformation rapidly, exerting a big influence on the public and businesses, and so the Government needs to have policies in place to manage and regulate it, a senior academic has said.
— Viet Nam News

Shares recover thanks to ‘Vin’ stocks
Nearly 185 million shares were traded on the southern bourse, worth VNĐ4.7 trillion (US$201 million).
— Viet Nam News

Conference highlights investment, trade opportunities in Thanh Hóa
Trịnh Văn Chiến, Secretary of the Thanh Hóa Party Committee described the event as a good opportunity for the province to advertise advantages, saying that it marked a new milestone in co-operation between Thanh Hóa and Russia.
— Viet Nam News

Motorcycle sales decreases in second quarter
Members of the Vietnam Association of Motorcycle Manufacturers witnessed sales of more than 749,500 units in the second quarter of this year, marking a decrease of 4.4 per cent from the same period last year.
— Viet Nam News