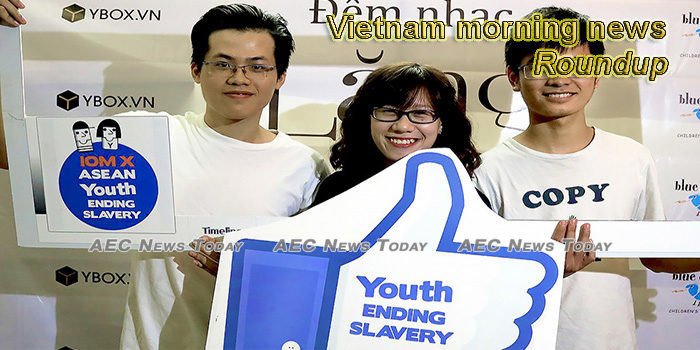 How Can Brexit Affect Vietnam? Let Us Count the Ways
What does Brexit have to do with Vietnam? It seems a strange question, but there are several ways that Britain’s planned divorce from the European Union would be likely to affect the Southeast Asian nation.
— VOA

Philippines-Vietnam Navy Talks Spotlight Maritime Security Collaboration
The staff-to-staff talks come ahead of 2020 which will put the focus on maritime issues within both countries’ foreign policies.
— The Diplomat

Vietnam manufacturing output increase for first time in 3 months
The headline Nikkei Vietnam Manufacturing Purchasing Managers’ Index (PMI) registered 51.0 in November, up from the neutral reading of 50.0 in October.
— The Hanoitimes

Vietnam’s average annual growth seen at 7%
The Vietnamese economy is likely to grow at an annual average pace of 7% during the 2021-2015 period, according to a projection by the National Centre for Socio-economic Information and Forecast.
— VietnamPlus

HCM City, Mekong Delta seek to improve waterway route for goods transport
The waterway links between Ho Chi Minh City and the Mekong Delta region through river and canal networks, which are proved to be more advantageous to trade than their road counterparts, have not been fully utilised.
— VietnamPlus

SL, Vietnam ink MoU for IT cooperation
The Federation of Information Technology Industry Sri Lanka (FITIS), apex body for ICT industry in Sri Lanka and Vietnam Software and IT Services (VINASA) signed an MoU at the opening ceremony of APICTA Awards 2019 in Vietnam where 19 member countries in the ASEAN region witnessed the landmark initiative of promoting IT cooperation between Sri Lanka and Vietnam.
— Daily News

Industrial production index expansion slows in November
The IIP decreased by an estimated 1.6 per cent compared to the previous month.
— Viet Nam News

Prices of petrol, gas advance
Fuel prices have been adjusted as of 3 p.m. on November 30 in accordance with the order of the ministries of Industry and Trade and Finance.
— Sggp News

Vietnam invests over US$458 million abroad in 11 months
Vietnamese businesses invested US$458.8 million in 31 foreign markets in the first 11 months of 2019, reported the Foreign Investment Agency under the Ministry of Planning and Investment.
— NDO

Efficient resource utilization may help Vietnam GDP grow 9 – 10%
The public capital must be allocated based on market principles, said an expert.
— The Hanoitimes

Sa Pa airport to be built this year
The Ministry of Transport has approved a plan to build an airport in Sa Pa in the northern mountainous province of Lao Cai. Construction is scheduled to start this year and will be completed in 2021.
— VietnamPlus

Legal overhaul urged for foreign firms to list shares in Vietnam
Encouraging FDI firms to list locally would help supervise their performance as the companies would be managed by not only local authorities but also investors, shareholders, and the local stock exchanges.
— The Hanoitimes

Why Vietnam Is A State In ‘Watchmen’ In Case You Haven’t Been Keeping Up
The world of Watchmen is complex, and between the giant engineered squids, mesmerism plans, and Nostalgia trips, it’s understandable if you may have forgotten a key difference in the makeup of Watchmen’s United States.
— Bustle

Reallocating financial loan for textbook writing in Vietnam
Out of the US$77 million borrowed from the World Bank (WB) as Official Development Assistance (ODA) for the project ‘New General Education Curriculum’ in Vietnam, $16 million is allocated for the Ministry of Education and Training (MOET) to write textbooks.
— Sggp News

Vietnam obtains 10 gold medals on SEA Games 30’s first day
The thrilling 2-1 victory over Indonesia by the men’s U22 football team and a gold medal in the women’s over 60kg arnis category concluded a successful day on December 1 for Vietnam at the 30th Southeast Asian Games (SEA Games 30).
— Vietnam Net

Condotel property market in urgent need of new regulations, standards
A legal framework covering condotel properties is urgently needed to protect the rights of both developers and buyers and to ensure sustainable development.
— Viet Nam News