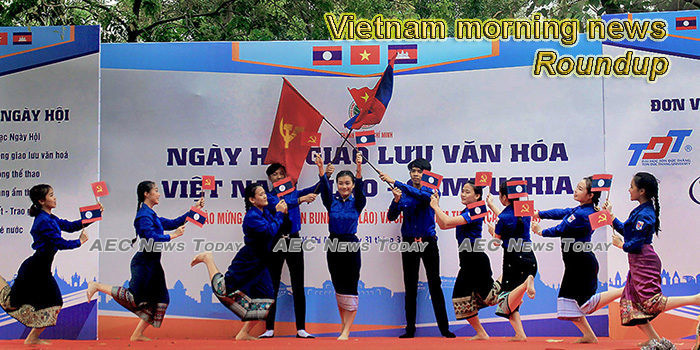 World Bank sees Vietnam’s economy grow 6.8% in 2019
The World Bank (WB) expects that the Vietnamese economy will have expanded by 6.8% in 2019, with public debt reduced by nearly 8 percentage points of GDP since 2016 and a trade surplus for the fourth year in a row.
— NDO

Myanmar, Vietnam travellers to get 30-day visa-free visits to boost tourism
Myanmar and Vietnam travellers can visit each other’s country for 30 days without visas starting on January 1, a Ministry of Foreign Affairs official said on Tuesday.
— Myanmar Times

Retail, banking sectors see big-ticket M&A deals in 2019
Acquisitions worth well over a billion dollars took place this year in retail and banking, and the trend could persist in 2020, experts say.
— VnExpress

Vingroup quits retailing to drive tech, industrial development
Vingroup, Việt Nam’s largest private firm by market value, has given up control of its retail unit as it wants to concentrate on the technology and industrial sectors.
— Viet Nam News

MoIT launches sites to deal with e-commerce disputes, counterfeit goods
Counterfeit goods have always been a major concern in Việt Nam. Whether it’s fashion items, electronic equipment, or even medicine, the problem of authenticity is often an issue.
— Viet Nam News

Vietnam, Japan enhance parliamentary ties
Vice Chairwoman of the National Assembly Tong Thi Phong and Vice President of the House of Councillors of Japan Ogawa Toshio agreed to promote parliamentary cooperation between the two countries during their talks in Hanoi on December 18.
— NDO

High-tech supply chain the key to sustainability for VN agriculture: experts
New technologies are key to advancing the agriculture sector since they can boost the value of products to make them more competitive on the global market, experts said.
— Viet Nam News

Vietnam to promote ASEAN’s interests, prosperity in 2020
As Chair of the Association of Southeast Asian Nations (ASEAN) in 2020, Vietnam will be responsible for promoting and increasing ASEAN’s interests and prosperity, Vietnamese Deputy Foreign Minister Nguyen Quoc Dung has said.
— NDO

Air New Zealand offers discounted tickets on VN-Christchurch route
The inaugural flight between Việt Nam and Christchurch via Singapore took off earlier this month, marking the start of its five times weekly seasonal service, which will operate until February 22, 2020.
— Viet Nam News

Enterprises pledge to stabilize pork prices
The Department of Industry and Trade of Ho Chi Minh City on December 17 had a meeting with relevant departments to seek for solutions to stabilize the price of pork from now to lunar New Year.
— Sggp News

New emissions standard to come into force next year
More than 2.4 million of cars manufactured since 2008 will have to meet new emission standards from early next month.
— Viet Nam Net

Condotels: risky yet promising property segment
Investment in condotels remains appealing despite defaults in profit commitments by property developers, but a clear legal framework is needed to protect investors’ rights, according to experts.
— Viet Nam News

Việt Nam needs more reforms: VCCI
Việt Nam’s reform process needed to step up a gear in order for the country to become one of the top four in ASEAN in terms of business climate
— Viet Nam News

Petrol prices drop slightly in latest review
The retail prices of petrol were reduced as from 3pm on Monday 16.
— Viet Nam News

Reforms needed to unleash potential of capital market
Although progress has been realised by Việt Nam in recent years, the country is still unable to finance all the needs of its hungry productive sector, including private firms and SOEs.
— Viet Nam News