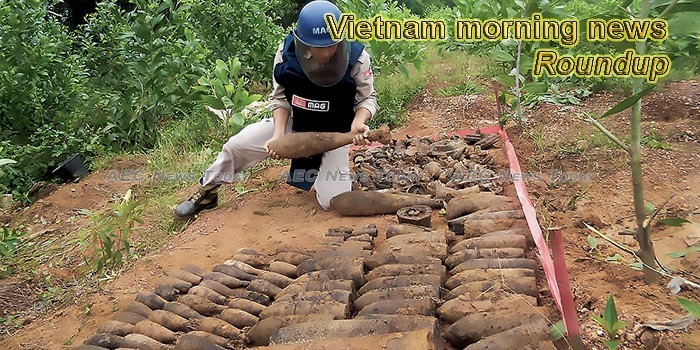 Vietnam’s economy is forecast to grow 6.8 percent in 2019 and 6.7 percent in 2020: ADB
The Asian Development Bank (ADB) said in its report “Asian Development Outlook 2019.” Strong exports and domestic demand pushed Vietnam’s gross domestic product (GDP) growth higher in 2018 than in more than a decade, standing at 7.1 percent, but in 2019 and 2020, a weaker external environment will likely moderate growth and narrow the current account surplus, while inflation remains stable this year but will rise somewhat next year, the ADB stated in its report released Wednesday.
— Vietnam Insider

Seafood, forestry contribute to agriculture’s growth in Q1
The agriculture industry posted a year-on-year growth of 2.68 percent in the first quarter of 2019, despite an array of difficulties caused by the African swine fever and unstable export markets, mainly driven by the seafood and forestry sector.
— VNA NET

HSBC forecasts VN economic slowdown in 2019
Việt Nam’s economy will grow at 6.6 per cent this year, slightly down from last year’s 7.1 per cent, HSBC has forecast in a report it released this week.
— Viet Nam News

GAINS model to help alleviate air pollution in northern localities
The usage rights of greenhouse gas and air pollution interactions and synergies (GAINS) model has been transferred to the Departments of Natural Resources and Environment (DoNREs) of Hanoi, Bac Ninh, and Hung Yen.
— VNA NET

First exhibition on port infrastructure, logistics slated for June
The 2019 International Port Infrastructure and Logistics Exhibition and Conference (Vipilec 2019), the first of its kind in Vietnam, is set to take place in Ho Chi Minh City from June 12 to 14.
— VNA NET

Foreign investors set their sights on poorly-performing banks
Foreign financial institutions were eyeing up poorly-performing Vietnamese banks after being given the green light to acquire stakes in local institutions in a move to speed up the restructuring of the country’s banking industry, according to banking expert Nguy�…n Trí Hiếu.
— Viet Nam News

Da Nang ranked among top destinations in 2019
The central city of Da Nang has been included in a list of 52 places to go in 2019 by The New York Times, which has an international readership.
— VNA NET

Vinh Phuc police seizes 20,000 meth pills
The police in the northern province of Vinh Phuc have brought to light a drug trafficking ring and found nearly 20,000 meth pills, the largest quantity of illegal drugs seized in the province so far.
— VNA NET

USAID-funded project helps Thua Thien-Hue reduce waste on rivers
A non-refundable assistance package provided by the US Agency for International Development (USAID) for the central province of Thua Thien-Hue to recycle urban waste has reaped positive results since its launch in August 2018.
— VNA NET